Barking and Dagenham were the winners of the 2016 Panathlon London Champions Final at the Copper Box Arena on Thursday, reclaiming the title they last won in 2010.

The East London team, made up of children from eight schools in the borough, edged out Croydon by 56 points to 48, with two sides making their debut at the Olympic Park showpiece, Enfield and Hillingdon, finishing third and fourth respectively.

First-timers Lambeth (pictured above in white) were the winners of the Plate Final with 54 points, comfortably ahead of nearest rivals Sutton, who finished with 44, followed by Havering (36) and Harrow (34).

More than 200 disabled children from 25 schools were in attendance at Panathlon’s showpiece event, held at the famous Queen Elizabeth Olympic Park for the third year in succession.

It marked the climax of 16 qualifying events since January, which have featured more than 1,200 children from over 100 schools across all 32 London boroughs.

As the victors celebrated victory in front of the cameras, tearful team manager Danielle Smith, Inclusive Officer at the London Borough of Barking and Dagenham, said: “I can barely speak! I’m just unbelievably proud of these guys. They’ve all done absolutely brilliantly.

“We’ve finished runners-up for the last few years. We’ve been scrapping for that first place so to have finally done is amazing. I look forward to this event every year. We do all of Panathlon’s events and this is the best day we’ve ever had.”

Barking and Dagenham’s victory rested on victories in the kurling, polybat, field athletics and closing relay races. For a full set of results, see here.

James Cole, 17, proudly showed off his gold medal as he said: “This is one of the best experiences of my life. My favourite is the table top cricket because you get to really smash the ball. Panathlon has lifted my confidence and skills.”

Team-mate Wahab Solomon, 15, from Eastbrook Comprehensive School, reflected: “I’ve loved it all today, but my favourite event was the field athletics. I’m so glad we won.”

Fiona Bell, of St Giles School, who is the Croydon team manager, was disappointed to finish second, having won the trophy last year.

“Competition this year is really strong and it’s a shame we’ve lost our title,” she reflected. “It’s still been a fantastic experience for them, though, and actually it’s a really important life skill for them to learn that winning and losing happen to us all.”

Croydon’s Sana Hanif, 13, who goes to St Giles School, won gold in boccia on the day and was part of the school team who finished seventh in the recent National Boccia Championships.

“I’ve got a lot of Panathlon medals at home,” she said. “I keep them safely in my bedroom. It’s really fantastic to come here. If I could say anything to the Panathlon organisers, it would be ‘Thank you for a wonderful day.’”

“The best thing is watching the happiness and enjoyment from a day like this coupled with that competitive element. Everyone leaves smiling but wants to win too.

“It’s lovely to see young adults with disabilities in an environment where they’re comfortable and confident enough to be competitive, yet friendly enough to have compassion and empathy for the people they’re playing against. “

Liz Johnson, triple Paralympic medallist, added: “You get so much from sport regardless of what level you play at and everybody deserves that opportunity. What Panathlon does that a lot of other charitable organisation don’t offer is the opportunity to compete. The fact that we’re in an Olympic venue is just the icing on the cake.”

Hillingdon, for whom this was their debut in the London Final, were delighted to have competed in such an auspicious venue.

Co-manager Chris Moore commented: “The children were really, really nervous this morning. The only chance they usually get to see a place like this is on the telly, so for these kids to take part in an event here is huge. To see the smile on their faces now and a medal around their necks is so special.”

Val Harnett, of Westlea School, who were the sole representatives for Enfield, said: “We didn’t come here with the intention of winning; we just wanted to have a fun day so the kids could take in the experience of competing in a stunning arena like this. I told them to have fun, do their best and enjoy the experience, and that’s exactly what they’ve done. Just being here makes us winners.”

Matthew Key, 15, said: “It feels really great and I think it means I’ve come a long way in playing polybat. I’ve met new people, made new friends and get better at sports.” 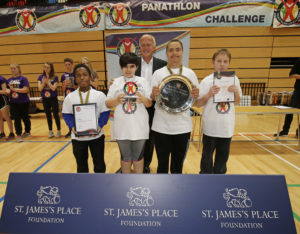 Desmond Lee, from Landsdowne School, said of his Plate winners, Lambeth: (pictured left) “This will be something they will remember for a very long time.”

Student David Pavel, 15, added: “It’s opened my eyes to what my abilities are and what I can really do.”

Sutton, who have previously competed in the Finals, were in the Plate this time around and finished second.

Team manager Ganymeade Gnahoui, from Sherwood Park School, said: “They absolutely love it. It gives them such confidence, raises their self-esteem and even this morning, driving through London together on a bus, was exciting. It’s been an amazing experience for them.”

Sarah Beck, who is a class teacher at Woodland School, said of her Harrow team: “We’ve got lots of smiling children. It’s fantastic because it links with a lot of the class curriculum at the moment which is around the Olympics. It gives them a great sense of wider achievement. It’s been a really positive experience for them.”

Mousa Malik, 11, who won gold in wheelchair racing for Harrow and has competed in numerous Panathlons, said: “I keep my medals in my mum’s drawer. I can’t wait to add this one!”

Havering team manager Ruth Mitchell added: “We’ve been coming along to the events for a few years, but this was our first time at a London final. They’re absolutely over the moon to be here. They’re winners in our eyes; it doesn’t matter where we’ve finished. Confidence, team play, social skills; the list of the benefits they get from this is never-ending.”

Harry Wagtail, 15, who won a gold medal in boccia, said: “It’s really good. I play boccia a lot in school; it’s my favourite bit by far.” 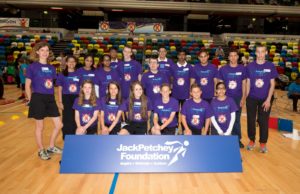 The day’s leaders (pictured left) came from schools and colleges as far afield as York and Teesside and were selected as ‘the best of the best’ across the country. Thank you to you all!

Westlea Sports College and Special School in Enfield contributed three leaders. Their coordinator, Marian Coram-Ware, said: “This gives them social skills and opportunity. From this, one of our guys has got an apprenticeship at Lord’s, while others have taken Boccia England’s Young Officials Level 1 qualification. They’re so good and so dedicated.”

Ellis Pointon, 19, and Charlie Roberts, 18, from Glebe School in Bromley, have been competing in Panathlons since they were seven and are now leaders. It’s no exaggeration to say Panathlon has been a huge part of their childhood. “It’s quite stressful because you’ve got to keep an eye on the staff and make sure the children know all the rules!” said Ellis.

Guy Wilkins, from Marjorie McClure School, said: “We use Panathlon as a vehicle for our leadership awards. They’ve been selected for duty here based on their performance at the Crystal Palace heat. As they become familiar with playing the sports, so they take on the leadership role. It permeates the whole school and others aspire to be like them.”

A gallery of pictures can be seen if you click the image below. 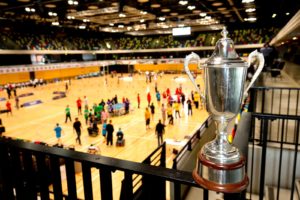