Barking & Dagenham will be competing at the Olympic Park in June after winning the East London final of the Panathlon Challenge today.

Paralympic champion Danny Crates watched on as 152 pupils from 21 schools in eight London boroughs competed at the University of East London Sportsdock.

The Barking & Dagenham team, comprised of pupils from eight local schools, retained their title after a thrilling day of competition against Hackney, Newham and Redbridge, with Havering winning the Plate final to also book their place at the Copper Box Arena on June 16.

Crates (pictured below right with Hackney’s Adam Hollingsworth) said: “It’s been a brilliant East London final with some really competitive action and that’s what Panathlon is all about. It’s about giving these children, who don’t always get the opportunity to do competitive sport, the chance to join in and represent their school and local area. 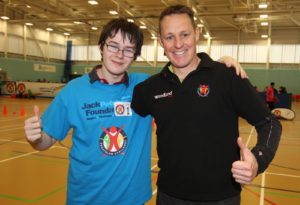 “These guys have all made it through to the final and you can see, just by looking around, how much it means to them. Congratulations to Barking & Dagenham and Havering, who are now going to the Olympic Park, where so many sporting dreams came true in 2012.”

The eventual winners were neck and neck with Hackney until the final event of the day, the relay races, before finishing with 48 points to Hackney’s 44. For full results please click here.

Luke Hammatt, PE teacher from Trinity School, said: “This is a fantastic achievement for our team. We are delighted.

“Panathlon really is one of the best events around because of the number of adapted sports which they provide for children with special needs. It’s amazing how many kids can take part and get to enjoy competitive sport.”

Engilson Hasa, 17 (pictured above left), who attends Trinity School, was enjoying his first visit to a Panathlon event. He said: “It makes me feel great to think I will be going to the Olympic Park.” 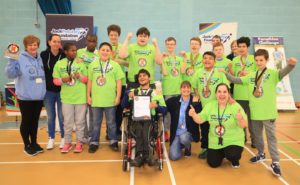 Havering (pictured left) are through to the Plate final for the first time after 10 years competing in Panathlon.

Ruth Mitchell, Learning Support Assistant at Hallmead School, said: “Our children really enjoy coming to Panathlon events and competing, but this really is a dream come true for them to reach the finals at the Olympic Park. It’s amazing.”

The Leaders today came from the University of East London and New Vic College and are seen here on the right. After a training course from Panathlon they were put to the test in the most competitive of circumstances and completed their officiating tasks with great enthusiasm.

In London more than 2,000 disabled youngsters will be involved in Panathlon events this year across the charity’s multi-sport, football, swimming, boccia, Primary Panathlon and impairment-specific programmes.

The flagship multi-sport competition sees all 32 London boroughs battle it out between January and March for a place in the London finals at the state-of-the-art Copper Box Arena in June.

This is the third year that Panathlon has held its showpiece final in the Olympic Park venue, but the first time it has done so in a Paralympic year, which will no doubt help inspire the Panathletes aiming for glory.

90 photos in the gallery from the day, if you click the first image- 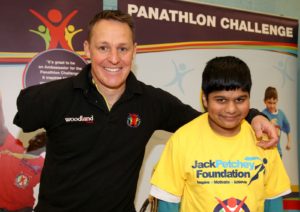