Alongside them, Montgomery Academy won the Birmingham Primary Panathlon, as 110 disabled young people from 11 schools across the region competed in back-to-back events at Nechells Community Sports Centre.

The second in a series of six regional finals saw Hall Green overturn the results of March’s Birmingham Panathlon to edge out Fairfax Schol by just two points, with Warwickshire – represented by Myton, Campion and Round Oak Schools – in third, ahead of Worcestershire champions Chadsgrove School.

“It’s fantastic,” said Shelley Paxton-Gault, Head of PE at Hall Green School. “The kids will go back dripping with medals, feeling fabulous and the parents will be really excited as well.”

The Birmingham champions did all they could to close the gap by winning the final set of races, but a second place finish for Hall Green was enough to secure first place and the title of inaugural Panathlon West Midlands regional champions. 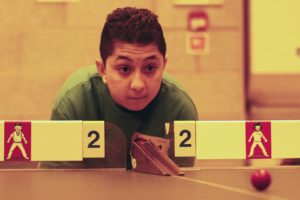 “It’s always a battle royal with Fairfax,” added Paxton-Gault. “It was as close last time in the Birmingham final as it was this time, but we pipped them this time and we’ll take it!”

13-year-old Harris Abdullah (pictured right) who captained the table cricket team to a second-place finish, was delighted with the overall victory.

“It’s brilliant,” he said. “I’m very proud of myself and I had a good time with my team – we won the West Midlands final! I look forward to showing off the medals to the headteacher and everyone at school.”

A second place finish in boccia and two bronze medals in table cricket and field athletics saw Warwickshire claim third place, edging out a Worcestershire team who claimed bronze medals in kurling, polybat and the athletics races. A full breakdown of scores is available in our results table.

The four West Midlands finalists are among 24 of Panathlon’s strongest teams competing in a series of six best-of-the-best finals this season – twice the number of last year. By doubling the size of the programme, Panathlon will extend its sporting pathway and provide another level of competition to twice as many participating Panathlon teams.

Both ends of the Panathlon pathway were on show in Nechells as, alongside the regional final, 60 young children from five primary schools competed in the Birmingham Primary Panathlon. 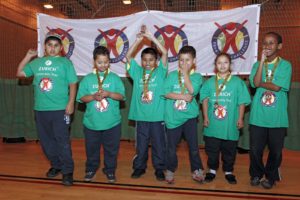 Montgomery Academy (pictured left) were one of a number of schools getting their first taste of Panathlon, but that didn’t stop them having a great time and taking first place while they were at it.

“We haven’t tried a lot of these games before, but the kids just wanted to get going and have a try, so it’s been great. I’m sure they’ll all sleep well tonight!

“It’s been a brilliant event and we’ll definitely be back at the next one, that’s for sure.”