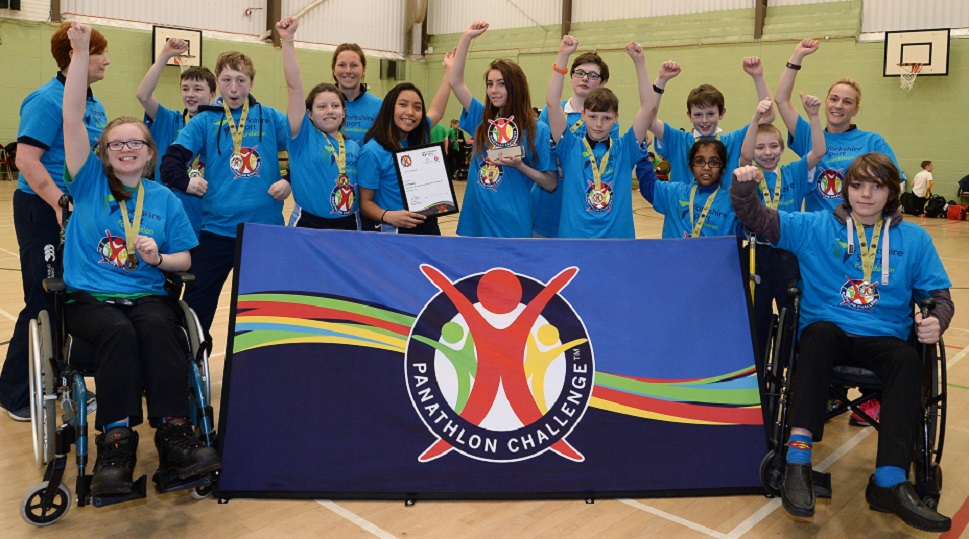 Calderdale retained their Panathlon Yorkshire Multisport title on a special day for one of their victorious team members, Thomas Green.

Sport-mad Thomas, 13, pictured left, a student at Brooksbank School in Halifax, was competing in his final Panathlon event on two legs. On Friday he, his family and friends are having a ‘Leg Leaving party’ to say farewell to his left leg, which he is having amputated.

Thomas has had 20 unsuccessful operations to treat a venous malformation, a network of veins behind his knee that have bled into the joint and caused severe arthritis. Any physical activity causes him intense pain and in October he was advised by specialists that amputation was his best option. At his party, he is having an Elvis Presley impersonator and a cake in the shape of a leg.

Thomas is hoping that fitting a prosthetic leg will enable him to take part in more competitive sport. Currently, Panathlon provide one of the few opportunities for him to compete in spite of his current disability.

At Energise Leisure Centre in York he was the star of the show, winning the shot put, table cricket and wheelchair race as his team Calderdale won through to the Panathlon North Divisional Final by notching up 50 points, beating  York and Selby by four points in a nail-biting contest. Full results available here.

Wakefield, who qualified by winning the West Yorkshire title, finished third with 40 points and Barnsley, the South Yorkshire champions, were fourth on 32.

The Calderdale team was made up of pupils from Brooksbank, Ravenscliffe School in Halifax and Brighouse School.

Thomas, who was competing in his fourth Panathlon, said: “At the end of a Panathlon event I feel like it’s a big achievement for me, because I can’t really do many sports. This is one I can do, and I love it.”

His father Matthew added: “Thomas has two brothers who are very good rugby players, but when he came back from that first Panathlon event with a medal around his neck, that meant more to me and his mum than anything.”

Sarah Pearce, Learning Support Assistant at Brooksbank School, commented: “All of our students love coming to these Panathlon events, but Thomas in particular loves them because it enables him to compete on a level playing field with other disabled children. He is one brave lad, and I know all of his friends are really looking forward to the party.”

Second-placed York and Selby also had a special young achiever in their ranks in 18-year-old Ben Robinson, pictured right, a student at Joseph Rowntree School in York. Pupils from Applefields School in Selby also competed in the team.

Last week Ben trained for the first time with the Team GB table tennis squad, having been taken four years by his teacher to a ‘Playground to Podium’ day to get more disabled young people playing sport.

That day, Ben, who has autism, had a go at table tennis, wheelchair basketball and football, and got invited back to take part in training.

“Ever since then, he’s flourished,” says Barry Cornforth, Joseph Rowntree’s SEN Lead. “Going to that ‘Playground to Podium’ event has changed his life, and Panathlon has also played a key part.”

Ben is now No.1 in Yorkshire at table tennis and is in the top five in the country in his disability category. He is due to compete at the Special Olympics and World Games and is also about to represent his school in the British national boccia finals in Sheffield in May.

“I have really enjoyed it,” says Ben. “I had my first GB training session last week and I was a bit nervous, but I met Will Bailey [the world No.1 who won gold at the Rio Paralympics].”

Cornforth, PE Lead at Joseph Rowntree, added: “Most of our kids are autistic so for them to come out, engage in team building, socialising, teamwork, building up their self-confidence and motivation, is so important.”

Harry Akudi, left, aged 15, a member of the third-placed Wakefield team, said: “I have really enjoyed it today and it’s nice to play against people from other schools. It’s the teamwork I love. It means the world to me. I really love Panathlon.

“It improves me socially as well, because after each game you get to shake the person from the other school’s hand. I always tell them ‘well played’ and you know how good they are if we come up against them again in the future. I’ve got my medals hung up on my wall in my bedroom.”

His PE teacher at Kettlethorpe School, Lewis Sharpe, added: “We’re trying to provide a lot of adapted sports to our pupils who are on the SEN register. These highly organised and very competitive events are just fantastic for them.

“We take part in a lot of special needs events, like individual boccia and table cricket events, but Panathlon is the key one for us. It’s like a festival for the kids, it’s really exciting for them.

“They’re a great little team. The day after a Panathlon you see them walking round the school with the medals around their necks looking so proud. They’re absolutely buzzing.”

Sam Moon, 13, of the Barnsley team, confessed he was “very excited” to be at his second Panathlon event.

He was part of the Greenacre School team that won the South Yorkshire county qualifier in Sheffield on their Panathlon debut, and although they finished fourth after stepping up to the regional stage, he reflected: “It was amazing! Panathlon is the best!”

Jeremy Lonsdale, Greenacre’s PE lead, added: “The key thing for the students is the competitive element, which we don’t get a lot of with external partners in the borough. There aren’t many other SEN providers close by. We have to travel to other towns and even then it’s mixed ability sports with those schools that have provision.

“The thing that we like about it most, and our staff and parents always comment on, is that Panathlon levels the playing field. That’s key for them to be able to perform equally against their peers.

“It’s the teamwork aspect. The target for a lot of our students is to work on their social and emotional skills, more than the sporting activities. This gets them out of their comfort zone, which is really important for them.”

The day’s Young Leaders were provided by York High School. One of them, 15-year-old Amy Lytham, had previously officiated at Panathlon’s London Multisport Final at the Copper Box Arena last year.

“I like being able to help young children with disabilities be able to do sports,” she said. “You get to use your own initiative to change and adapt the different sports and to work in a team and it helps your communication skills working with people that you haven’t met before.”

Helen Metcalfe, whose 15-year-old son Tom is a pupil at Joseph Rowntree School, came along to watch. She observed: “Tom just think this is awesome. He loves competing with his friends. Even if they’ve lost, he just loves to take part. It’s just fantastic.”

For a full gallery of images from the day, click the photo here