Enfield’s Panathlon team are heading to the Olympic Park for the first time after winning the North London title in convincing fashion at Sobell Leisure Centre in Islington.

The team of students from West Lea School put in a strong display throughout the day to see off competition from Brent, Haringey and reigning North London Champions Hammersmith & Fulham to clinch their place at the Panathlon London Final at the Copper Box Arena in June.

They will be joined there by Harrow, who secured a return to the Copper Box – scene for their 2014 London title win – by winning the North London Plate competition.

“We’ve come second and third in the previous two years but never quite made it to the final. I’m really chuffed for the kids. The Copper Box is going to be an amazing place for them to visit. This was a step up today, but that will be a step up even further, so it’s going to be brilliant.”

Enfield won four of the day’s six events – boccia, new age kurling, field athletics and the athletics races – to take the North London title on 54 points and secure their place at the Copper Box, leaving the team to enjoy the prospect of competing at the London 2012 venue.

“I’m really happy. I can’t wait. Bring it on!” said 15-year-old Gulcin Firat (pictured right), who helped her team to a gold medal in the boccia. 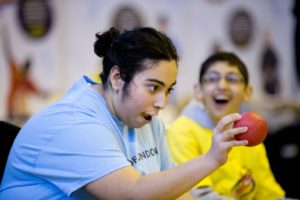 “It’s really exciting and overwhelming,” said 15-year-old Tommy Osbourne. “We thought we might come second or third, but we’ve won it, which is a great achievement.”

Hammersmith & Fulham pushed Enfield close with victory in polybat and four silver medals, but the 2015 North London Champions had to settle for second place (46 points).

A consistent performance from 2015 London Plate winners Brent – including a victory in the table cricket – saw them make a successful step up to the Champions competition in third overall (40), while Haringey were unable to replicate their success at the London Football Finals, finishing in fourth (28).

A full breakdown of the scores from our Champions Final is available on our results pages.

In the Plate competition, Harrow secured a return to the Copper Box Arena with a dominant display, winning four events – table cricket, polybat, field athletics and the athletics races – en route to a score of 54 points and first place, ahead of Westminster (48) and Barnet (42), after Camden were sadly forced to withdraw on the day. A full list of scores can be found on our results pages.

Gold medals for Westminster in boccia and new age kurling ensured that Harrow didn’t have it all their own way. There were just two points in it before the athletics scores came in, but the 2013 and 2014 London champions won them both to secure a return to the Copper Box, venue for their most recent triumph. 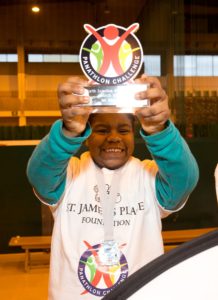 “We’re elated,” said Beate Ruppenstein, teaching assistant at Kingsley High School. “The kids will be very excited going to the Olympic Park. We’ve got a new team this time, but it will be brilliant. We’re really looking forward to it.”

In 2014 Harrow became the first Panathlon team to taste success at the Copper Box Arena, with this year’s London Final the third to be held in the state-of-the-art London 2012 venue.

Enfield and Harrow can now sit back and wait to see who their opposition will be, with three more London semi-finals scheduled for March, as 24 more London boroughs look to fill the remaining three places in the Champions Cup and Plate competitions.

Whoever makes it will be in for a treat, according to Team GB wheelchair basketball star Louise Sugden, who was on hand in Islington to hand out medals.

“It’s so inspirational for these kids to be able to compete at a venue like the Copper Box,” said the double Paralympian. “I actually train there with my league club, the London Titans, and it’s a fantastic venue. It will provide extra motivation for the kids.”

Louise is currently training hard for Rio 2016 and is hoping to make the squad for her third Paralympic Games – after appearances at Beijing 2008 and London 2012 – but she understands the importance of sport for participants at all levels. 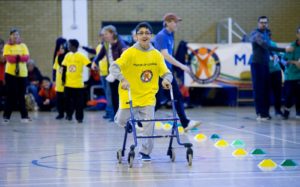 “Not everyone is going to make it to Paralympic standard, but as long as these kids are keeping active, doing well as a team and enjoying themselves, that’s all we can ask for. Panathlon provides opportunities for them to take part in competitive sport and that’s huge for them.

“Every child should be able to compete at sport on a level playing field and that’s what Panathlon allows.”

Panathlon provides sporting opportunities for over 7,500 disabled young people each year across London and 27 counties nationwide. Over 450 schools took part in 115 ‘mini Paralympic’ competitions in 2014/15, with more than 50,000 active hours of sport provided to disabled children.

In London, more than 2,000 disabled youngsters will be involved in Panathlon events this year, across our multi-sport, football, swimming, boccia, Primary Panathlon and impairment-specific programmes.

This is made possible by support of the Jack Petchey Foundation, the Mayor of London’s Office and the St James’s Place Foundation, so a huge thanks to them, as always. 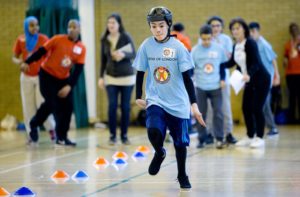 Many thanks also to our leaders at the North London Final – from Chessington Community College in Kingston, Quintin Kynaston Community Academy in Westminster and Whitefield School in Barnet – who oversaw the day in a professional and organised manner. Well done to you all.

A selection of images from the day is available to view in our photo gallery, below.