Croydon will be out to defend their Panathlon London title at the Copper Box Arena in June after winning a gripping South London Final in Crystal Palace.

The team of students from Priory, Riddlesdown and St Giles Schools – many of whom were new to the Panathlon team – overcame a strong challenge from Bromley, Lewisham and Greenwich in a closely fought contest at the National Sports Centre.

The four-time London champions clinched victory in the last event of the day – the athletics races – to secure a return to the Olympic Park in June, where they will be joined by South London Plate winners Lambeth.

“That’s the best one yet, it’s amazing,” said Fiona Bell, PE teacher and Head of Secondary at St Giles School. “We came here today expecting to finish third, with a development team and loads of new players. I’m just so proud of them. It’s been a great team effort.”

Former St Giles student Toyin Fabusiwa (pictured below, right), who now studies at Nescot College but remains in the Panathlon team, said: “I’m really proud of the whole team. It’s a very different team but we worked well together. I really enjoyed the Copper Box last year and hopefully we can do it again.”

The early stages of the competition were nip and tuck, as Croydon won the polybat, finished second to Bromley in table cricket and third as Lewisham won both the boccia and new age kurling to see just two points separating the three teams before the athletics events. 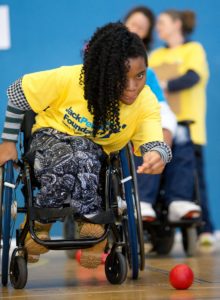 It was here that the reigning champions stepped up to the plate, winning gold in the field athletics and silver in the relay races to clinch the title on 48 points.

Bromley, who gave their students a greater leadership role than normal at the finals, came in second place on 44 points, just ahead of Lewisham (42) in third.

Greenwich claimed silver medals in boccia and polybat as they finished fourth overall (28). All Champions Final scores are available to view on our results pages.

Lambeth secured a first ever appearance at the Olympic Park Finals with a dominant display in the Plate final.

The students from Landsdowne School and Turney School won four of the day’s six events – table cricket, curling, polybat and the athletics races – to claim a convincing victory on a total of 54 points.

For a full breakdown of all the scores from the Plate final, please visit our results pages.

“We’ve had a good day,” said Colin Johns, PE teacher at Turney School in Lambeth. “We’re looking forward to another day out and a trip to the Copper Box and the Olympic Park, which will be a nice treat for the kids. They’ll really enjoy it, I’m sure.” 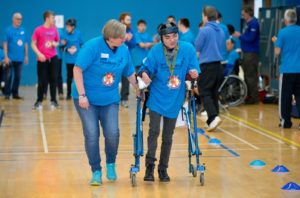 “It’s important for our students to come out and mix with kids from other schools. At Panathlon we tend to use a lot of students who maybe don’t come out to more mainstream sports events, so it’s nice for these kids to get involved.”

Croydon and Lambeth join North London Champions Enfield and Plate winners Harrow in the London Finals line-up, with 16 other boroughs set to battle it out in East and West London later this month for the final four places at the Copper Box Arena.

One person who knows what it is like to compete in the Olympic Park is Paralympic swim champion Liz Johnson, who enjoyed being part of another South London Panathlon Finals Day.

“The thing that struck me the most today was the level of activity,” said Liz. “There was a real positive buzz about it and everyone was getting involved. I’ve been coming to Crystal Palace for a few years now and every year the numbers and diversity have increased, which I love.”

Panathlon Ambassador Liz is now looking forward to another trip to the Olympic Park, four years on from her bronze medal at the London 2012 Games.

“The Copper Box is so iconic and it gives these students a reason to train that little bit harder. Plus we’re in a Paralympic year and when the London Final comes around, we’ll only be three months away from the Rio Games, which will make this year’s final extra special.” 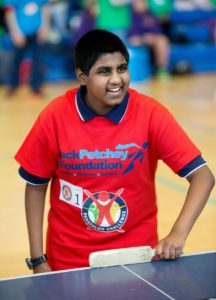 Panathlon provides sporting opportunities to over 7,500 disabled young people each year, with more than 2,000 Londoners set to be involved in Panathlon’s various programmes in the capital this year.

This is made possible by the support of the our sponsors, including the Mayor of London, St. James’s Place Foundation and the Jack Petchey Foundation.

Hannah Cilia, Head of Grants Team at the Jack Petchey Foundation, was visiting her first Panathlon event at the South London Finals, where she presented medals to many of the 155 participants from eight competing London boroughs.

“To be here and actually see first hand what Panathlon does for young people and what they get out of it is just fantastic – you can’t imagine it,” said Hannah.

“Jack is a believer that anyone can achieve and that if you think you can, you can. Today is just testament to that. Every young person that is here, they are all achieving but all supporting each other and egging each other on. It’s perfect.”

Thanks to our young leaders from Oasis Academy in Croydon and Harris Academy in Southwark for overseeing all of the events at a terrific South London Finals Day. Well done to you all.

You can also take in a 360-degree view of the action:

… or some wheelchair race action – you can look left and right too!