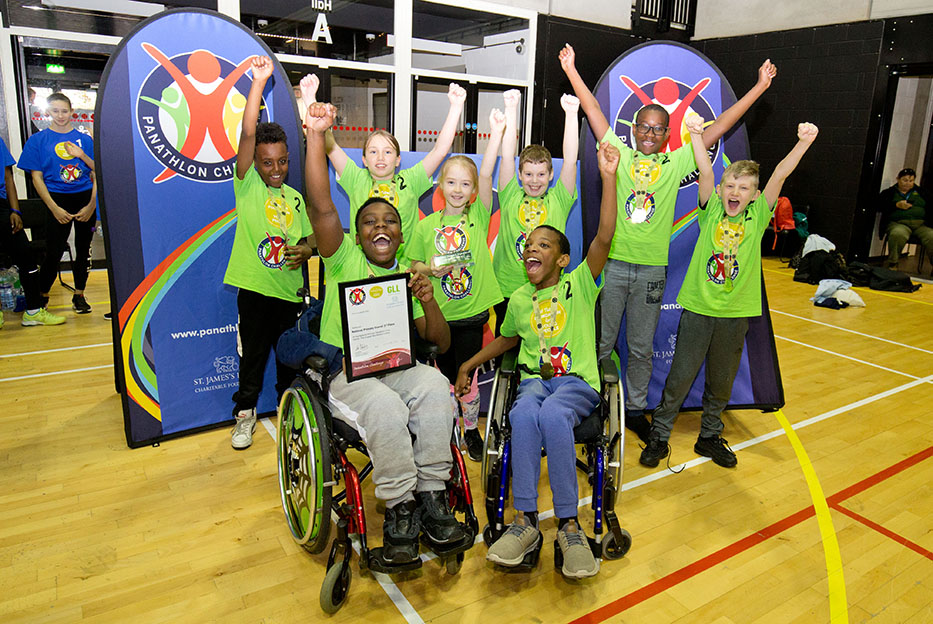 Panathlon’s first ever National Primary Final brought 17 teams from across the country to the Copper Box Arena in London with Great Barr Academy from Birmingham crowned the inaugural winners.

With such a large number of competing teams, the vast 2012 Olympic and Paralympic venue had to be split into three, with three group winners receiving gold medals and the team with the highest score across all three groups claiming the overall winners’ trophy.

Holy Family School from Surrey were winners in Group One, Great Barr triumphed in Group Two and there were joint winners in Group Three – Panathlon ‘veterans’ Albert Pye from Suffolk and London’s Sellincourt Primary. When all four group winners’ scores in each individual event were compared, Great Barr were declared the victors. Scroll to the bottom of the page for a full picture gallery. 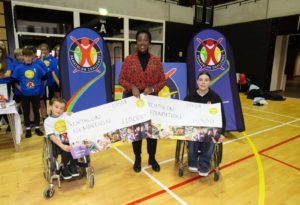 A special visitor on the day was Subira Ismail (right), Events and Campaigns Executive from Panathlon funders DM Thomas Foundation, who presented a cheque for £14,500 which will continue to support Panathlon’s extensive activity for primary-age children into 2019.

“The DM Thomas Foundation are so impressed by how Panathlon allows everyone to be included and involved, whatever their disability,” said Subira. “The work they do with young people in secondary schools, training them up to be Young Leaders, is essential. It gives them experience and leadership skills. That really stands out for us.” 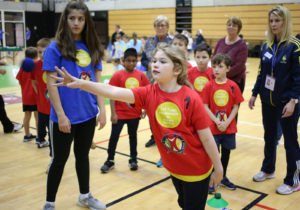 Holy Family Catholic Primary in Addlestone, Surrey, took home the gold medals in Group One. They qualified by virtue of winning our Surrey county final, experience that undoubtedly helped them in the grander surroundings of the Copper Box.

“These children wouldn’t usually get the chance to represent our school. It’s such a great opportunity for them,” said Holy Family’s PE co-ordinator Miss Quinn.

“They are amazed by the fact that the Olympics took place here. Our headmaster has been holding training sessions after school to build up their confidence, and it’s obviously worked!”

Eight-year-old Harry Pearson said: “I loved the beanbag throw the best. I’m going to put my medal on my wallboard at home with my rugby and tennis ones. This will be the best, of course!”

Last year’s Essex champions, Beckers Green, finished runners-up in the group, with teacher Sue Brown saying: “This morning they were so excited – I can’t even begin to describe it! There was a town crier on the train and he rang his bell to announce we were competing here to the whole platform!” 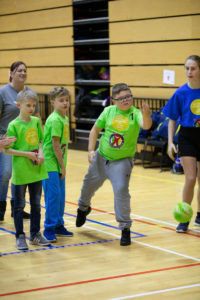 Sixth-placed Springwell deserve special mention for making a round-trip of some 518 miles from Hartlepool for the occasion. Our Tees Valley champions stayed overnight before and after the competition.

Teacher Scott Mallabar said: “We’ve been so excited for this, mostly because of this venue which is just unbelievable. Walking past the Olympic Stadium this morning, the kids were asking, ‘Is Usain Bolt here?!’

“First and foremost they will take such pride from this; the fact they have travelled the furthest out of all today’s teams and represented their school, when in reality they don’t often get selected to compete. They are amazing ambassadors.” 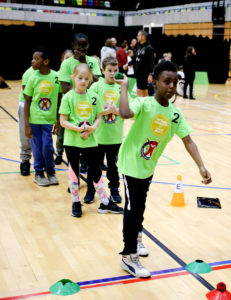 Great Barr Academy took first prize in the group as well as the overall winners’ trophy, to build on their victory at last year’s Birmingham Primary Final.

“I am so happy, I had no idea that was going to happen. I just want to say to all the other children ‘well done’ because they all tried so hard,” said 10-year-old Matthew Kiflon (pictured left). “We are so lucky that we won! Panathlon makes me feel so excited – I love it!” added a beaming Ernest Boatey, 11.

Great Barr Academy assistant head teacher Mike Arnold said: “Panathlon fits absolutely perfectly with the ethos of our school. Our children take part in everything together inside of school and this is a continuation of that. Our pupils don’t see difference or disability, and we instil that way of thinking from reception year.”

Chris the Saviour School from Ealing qualified after finishing runners-up in our London Primary Final and they finished with more silver medals after finishing behind Great Barr in Group Two.

“When we told one of the boys we were coming here to the Olympic Park, he said, ‘Please tell me you’re not joking! This is a dream come true!” said teacher Pilal Butt. “A lot of these guys don’t normally get to do these sort of things, but here they learn how to work as a team, acquire new skills and make new friends.”

In third place were children from Rushmere Hall School’s hearing specialist base, plus one student from neighbouring East Bergholt School in Ipswich. Among the team was 10-year-old Evie Lake, who plays football for Suffolk county girls team.

“We are really lucky to have this Panathlon ‘resource’ which benefits our children so immensely,” commented Teacher of the Deaf, Jo Hughes. “For them to be competing in the same venue where world-class athletes have performed just swells their pride. Their excitement levels have been through the roof!” 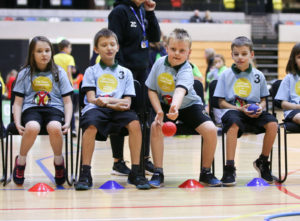 Joint winners in this group were Sellincourt Court from Wandsworth, winners of our London Primary Final at the Copper Box in July, and Panathlon ‘veterans’ Albert Pye School from Suffolk.

“We’ve brought our Mr Panathlon with us!” said Albert Pye teacher Stewart McKenzie. “Riley followed Panathlon all the way through his life with us and although he’s now gone on to high school we couldn’t resist inviting him back today.

“He got nine Panathlon medals and an individual award while he was with us, which is phenomenal, so our kids really look up to him. He is all you need to know about the impact Panathlon has had on our school.”

Luke has competed in Panathlon for six years and will not be stopping any time soon! “Panathlon gave Luke so much more confidence,” said teacher Andrea Griffiths. “He believes in himself much more than he used to. He really helps with the younger students. He sees himself in some of them. He’ll say, ‘I remember when I felt like you.’ He supports them so well.” 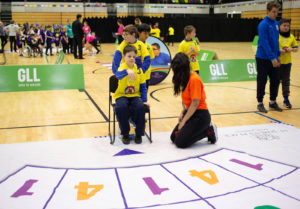 In third place were Egerton Rothesay School from Buckinghamshire, whose pupils of primary and secondary age compete regularly in Panathlon events. “Panathlon has had a huge impact on our school,” said teacher David Walker.

“These guys struggle to access some sports and wouldn’t normally have a chance of winning anything. To go home with medals is a huge thing for them. They’ve been in the best mood ever. Coming to this stadium is amazing for me, never mind them!”

Archie Benjamin-Butchard, 10, said: “I’ve got lots of sports day medals and I also have one from my old school but this is the best.”

The day’s Young Leaders came from three schools including our newly-crowned Jack Petchey Foundation School Newcomer of the Year award-winners, Burnt Mill in Harlow, Essex. The others represented Barking Abbey in east London and St Ivo School in Cambridgeshire. One student from the latter school, 13-year-old Toby Brown reflected:” It’s so much fun to just help the kids enjoy what they’re doing and get them active. It helps me communicate well with kids and is a great thing to have on my CV.”