Gresham School in Croydon and The Albert Pye School from Suffolk were the big winners at Panathlon’s London and South East Primary Finals at the Queen Elizabeth Olympic Park’s Copper Box Arena.

Teams from 21 schools, who had all qualified from regional events, gathered at the 2012 Olympic and Paralympic venue, which for the purposes of this huge event was split into two: one side for London schools and another competition for those in the south east.

The London competition was itself split into two heats: the Wembley Stadium Trust heat, won by Gresham School, and the Mayor of London heat, won by Goldbeaters School from Barnet.

Gresham won the overall title with 47 points, ahead of Goldbeaters on 45, with Enfield’s Eastfield School and The Warren School from Barking and Dagenham picking up silvers in each heat. Redriff from Southwark and Broadfields from Barnet collected bronze.

Harry Boxall, 10, from the victorious Gresham team, said: “This is really exciting. I’m going to put my medal in my wardrobe!”

Sarah Wilson, teacher at Gresham School, added: “It gives them a sense of being part of a team and they love it. We like the competitive element and it’s just amazing to have won. We’ve never been to the Copper Box before and it’s been an unbelievable experience.”

Hugh Wilkinson, Lead Coach at Goldbeaters School, reflected: “Wow, this is absolutely amazing. The kids have loved every minute of it. To get here takes a lot of resilience for them and to go home with gold medals… I’m almost lost for words!” Standing alongside his teacher proudly sporting his gold medal was 11-year-old pupil Mussallam Aldhefiri, who said: “I was sure we could win. When I get home I think I’m going to scream; I’m so delighted!” 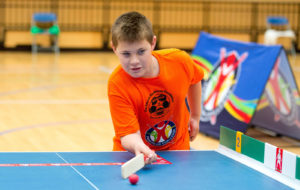 Across the other side of the hall, Albert Pye School from Beccles in Suffolk were crowned South East champions, beating Halifax School from Ipswich into second, and Colchester’s Doucecroft School, who went home with bronze.

Star of the day for victorious Albert Pye was Riley Barber (right), winner of our 2016 Suffolk Emma Holloway Foundation Outstanding Achiever award. The nine year old, who has dyspraxia and learning difficulties, is a ‘veteran’ of seven Panathlon competitions. “Being here at the Copper Box is so exciting,” he beamed. “I love it so much – I give it 10 out of 10!”

His PE teacher, Stuart McKenzie, has been leading lunchtime and after-school practice sessions specifically for Panathlon competitions. He said: “One of the many, many things we love about this competition is that it’s not a ‘well done you’ tap-on-the-head kind of event.

“Our school is mainstream and pupils have got to eight county finals this year. When we have kids up on stage in assembly on a Friday, this counts this as an equally impressive achievement to anything the other pupils have done. They get a cheer from the whole school and everyone knows these medals have been earned, not just handed out for participation.” 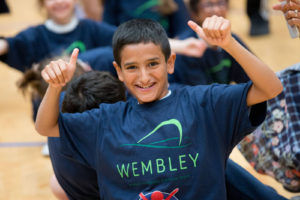 Another Panathlon ‘veteran’ competing with equal gusto to Riley was Dean Davidson, an 11-year-old pupil at third-placed Doucecroft, who has autism and curvature of the spine.

“When Dean first came to our school we couldn’t get him to do any PE or physical activity,” said the school’s coach, Andrea Griffiths. “Since he’s been doing the Panathlon, he now competes in the swimming, which he’s brilliant at, as well as multisport. He is constantly asking me when the next Panathlon event is going to be. We’ve made him team captain so he will now help our younger students when he goes up to secondary age.”

Dean added: “My favourite events are the football and New Age Kurling. I always look forward to Panathlon. It makes me excited.”

The competition, like all of Panathlon’s primary-age events, was made possible by the funding of the Wembley National Stadium Trust, whose Chief Executive Stewart Goshawk was in attendance to hand out medals and trophies. 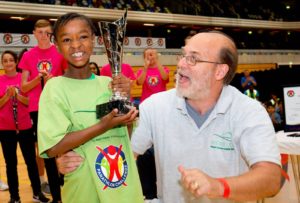 One very special prize was given to Marjorie McClure School pupil Aminata Kalokoh (pictured right – read all about her here) and as he looked around the vast Copper Box Arena, Stewart was able to reflect how far Primary Panathlon had come since his Trust began funding the programme four years ago.

“From our point of view this has been a tremendous partnership and a truly rewarding experience. Getting out and seeing the students having the most fantastic time is a testament to all the work that goes into it, and the skills that the children learn here will have a knock-on effect back in the classroom,” he said.

“When we started looking for a charity to support in 2013 what we were looking for were organisations that were doing something special in disability sport and that had the potential to grow. We couldn’t have picked anyone better than Panathlon.”

Helping Stewart with prize-giving was Panathlon Ambassador Jonathan Coggan, who has competed in four Paralympic Games as a member of the GB wheelchair rugby team, and has just returned from Germany, having retained the European Championship title by beating Sweden.

“I don’t think these children get the opportunity anywhere else,” he said. “To come to a prestigious venue like this must be such a buzz for them. Holding it here shows how strong Primary Panathlon is becoming – and kids are coming from so far away because they know how worthwhile it is for them.”

Students from Eastfield School, who finished second in the London competition, received an added bonus from their visit. As a school situated close to the Olympic Park, they were handed tickets for the upcoming World Para Athletics Championships, which start next week.

Their teacher, Leanne Judd, said: “My guys really cheer each other on at Panathlon events. It gives them a real sense of pride and the rest of the school is really, really proud of us.” 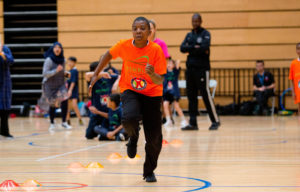 Pupil Reece Williams (left), 11, added: “It’s been very good. I scored loads of goals in the football. It gives me high energy!”

The day’s Young Leaders were provided by William Edwards School from Grays in Essex, with support from Active Essex and our funder the Jack Petchey Foundation, as well as Richard Hale School from Hertford, with help from Paradise Wildlife Park.

Also helping out were students from Barking Abbey School in London. One of them, 17-year-old Kaydee King, said: “I love seeing the kids enjoy themselves. It’s so satisfying to see their faces light up. It’s an amazing thing to be able to make their day and it also improves my leadership and communication skills.”

For a full selection of the photos from the day, please click here.