The line-up for the Panathlon Challenge’s London finals is complete, after Hillingdon booked their first trip to the Olympic Park on Monday to join reigning champions Croydon, 2015 runners-up Barking & Dagenham and Enfield at the Copper Box Arena in June.

Hillingdon won a tightly-contested West London final at St Mary’s University in Twickenham, overcoming Merton, Richmond and Wandsworth to progress to the London Champions Cup final for the first time.

Meanwhile, Sutton (pictured above left in white) will join Havering, Lambeth and Harrow in the Plate final on June 16th, after they overcame Ealing, Kingston and Hounslow.

The London finals will be the climax to 16 qualifying competitions involving 1,271 competitors and 246 young leaders from over 100 schools.

Almost 150 children from 18 schools and eight boroughs competed in the Champions Cup and Plate competitions on Monday, and three-time Paralympian Helen Turner, a Panathlon patron, who awarded the medals, was thrilled to see how the charity is growing.

She said: “Panathlon has always been brilliant, but what has impressed me today is the number of children who have been coming year on year, and because of that they have been preparing and practising for today. They are taking Panathlon home with them and you can see how delighted they are with their improvement.

“Like any sport, you need to practise and that’s how your confidence grows.”

All attention now turns to the finals at the Copper Box Arena and Turner added: “The Olympic Park is an amazing venue and this is what Olympic and Paralympics legacy really means – giving children of all abilities the opportunity to compete.”

The competition was neck and neck until the final event of the Champions Cup, the running races, with Hillingdon finishing with 48 points, two ahead of Wandsworth. Richmond were third with 38 and Merton fourth with 36. For full results click here.

Lorraine Veck, Special Needs Classroom Assistant at Coteford Junior School, who coached the Hillingdon team, said: “I’ve been coming to Panathlon for over 10 years and this is the first time we have got through to the final. It’s brilliant.

“We are a mainstream school and this gives disabled children something which they can achieve for themselves. They all want to do Panathlon.

“At school they feel they are different because of their disability. They come to Panathlon and they realise they are not that different. It builds their self-esteem and lifts their self-confidence. They become less inhibited about their boundaries.”

Ruby Denton, 10, from Coteford Junior, which is a mainstream (able-bodied and disabled) school, said: “I think this is my third year at Panathlon. At school it can be harder for me to win things because other children are always winning. But when I come to Panathlon, I can win too – although it’s not just about winning. It’s about us all getting to take part. It’s cool!”

Vanessa Thomas, Grants Officer for the Jack Petchey Foundation, which supports Panathlon, said: “This is a wonderful event and everyone at the Foundation is really proud to support it. It gives an opportunity to compete and play sport to children, irrespective of their ability.”

The Young Leaders and officials today were all from St. Mary’s University, and performed with much skill and enthusiasm, so a big thank-you from us to you!

Hillingdon will not be the only new faces in the London final. In the North London section of the Panathlon Challenge, Enfield won through after overcoming Brent, Haringey and reigning North London champions Hammersmith & Fulham.

Val Harnett, Enfield team manager and teacher at West Lea School, said: “We’ve come second and third in the previous two years, but never quite made it to the final. I’m really chuffed for the kids. The Copper Box is going to be an amazing place for them to visit.”

Reigning champions Croydon claimed their place after beating Bromley, Lewisham and Greenwich in a closely-fought South London final at the National Sports Centre in Crystal Palace.

“That’s the best one yet; it’s amazing,” said Fiona Bell, PE teacher and Head of Secondary at St Giles School. “We came  expecting to finish third, with a development team and loads of new players. I’m just so proud of them. It’s been a great team effort.”

Last year’s runners-up, Barking & Dagenham, saw off the challenge of Hackney, Newham and Redbridge to triumph in the East London final at the University of East London’s Sportsdock.

Another Paralympian, Danny Crates, was present to award the medals there and said: “These guys have all made it through to the final and you can see, just by looking around, how much it means to them. Congratulations to Barking & Dagenham and Havering, who are now going to the Olympic Park, where so many sporting dreams came true in 2012.”

A selection of photos from the West London final if you click the first image. More to appear soon! 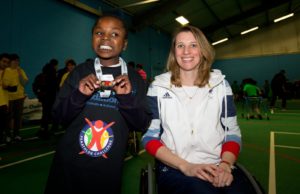