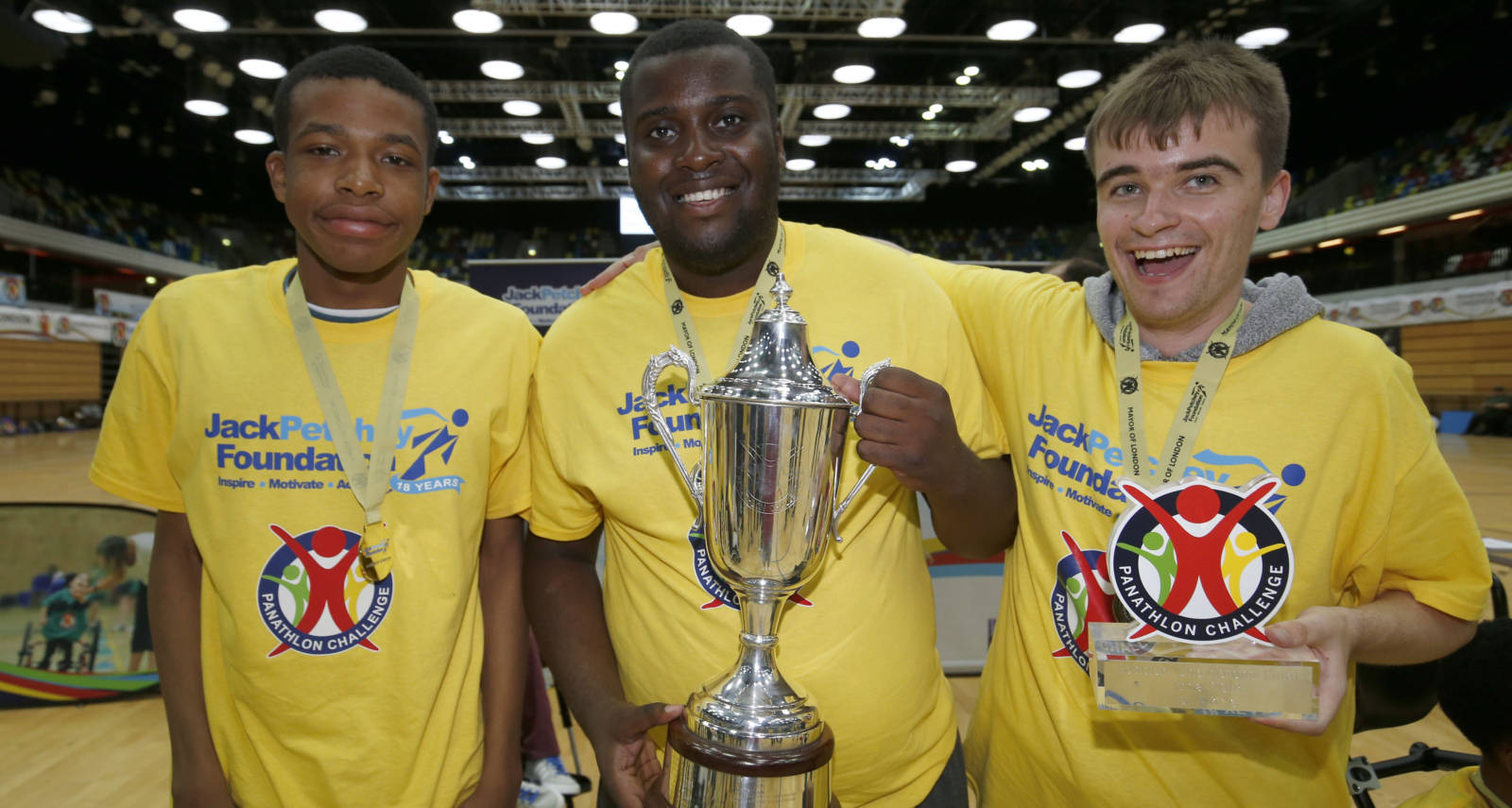 Barking & Dagenham wrapped up their third successive London Multisport Final title at the Copper Box Arena at the Olympic Park with another thoroughly dominant display.

The team comprising pupils from Dagenham Park, Eastbrook, Jo Richardson, Riverside Bridge, Robert Clack, Sydney Russell and Trinity schools won every event bar the track athletics to become the first team ever to be crowned London champions three years in succession, as well as the first to accumulate five titles overall since the event began in 2005.

Their victory was the culmination of a year-long competition encompassing teams from all 32 London Boroughs, 16 qualifying competitions, 30 teams and 1,500 competitors. The Champions Final and the Plate Final, which took place simultaneously today at the London 2012 venue, saw 200 young people take part from 24 schools.

Barking & Dagenham’s victors’ trophy was handed over by special guest, Baroness Tanni Grey-Thompson, winner of 11 Paralympic gold medals. She commented: “Panathlon is amazing because it brings sport and physical activity to a range of people who might not be so easily able to access it otherwise.

“What’s really important is that Panathlon gives these young people the confidence to have a go, compete in front of their friends and with people watching them. It makes them feel really positive about themselves and builds an incredible team spirit between them.

“It’s amazing to be here; it’s such a cool atmosphere. It’s a little while since I came to my last Panathlon event and it has grown so much in that time.” 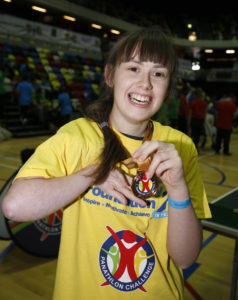 Amongst the victorious team was Georgina Hart (right), Panathlon’s Jack Petchey Outstanding Achievement award winner back in 2015. She is currently working towards the GB team and a potential future Paralympic appearance in her chosen sport of club throwing and was featured on this year’s Sport Relief for her work combatting bullying. She said: “I’m incredibly proud. No matter how many times I come here I’m always a little bit nervous but to win gold again is a dream come true.”

Georgina, who has cerebral palsy, is Barking & Dagenham’s precision beanbag expert and competing in Panathlon for the last few years has been a key part of her growth in confidence after a tough time at junior school.

“When she was younger she was bullied a lot, but Panathlon has given her a massive confidence boost,” said Emma Gillan of the Borough of Barking & Dagenham Healthy Lifestyles Team. “She started in Year 7 and has just grown and grown. She is more outgoing and has blossomed into a fantastic role model, and Panathlon has been key to that.”

Georgina’s mum, Susan, agreed: “Panathlon has opened so many doors for her. She was accepted here and that has helped her feel accepted everywhere.– she’s starred in shows at the Queen’s Theatre, has done public speaking and volunteers at the Scyamore Trust helping autistic children.”

Watch our video on all Georgie’s achievements here >> https://youtu.be/ocLoO10zfgU

Panathlon has also been a hugely important stepping stone for 15-year-old Matthew Key (below left) of the second-placed Enfield team. Previously a self-confessed “couch potato” whose autism contributed to him being “sullen, angry and difficult” in PE lessons, competing in Panathlon competitions began a turnaround in his attitude to sport. 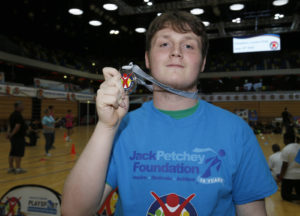 “There’s no doubt about it, Panathlon has given me a better future,” he said. “It has let me focus that negative energy into something positive instead of just mucking about. I’ve now started boxing at Finchley Amateur Boxing Club. One day, Anthony Joshua came in and sparred with me. My nose started bleeding, but despite that I just wanted to keep going. My ultimate ambition is to get every belt in the heavyweight division. It is honestly Panathlon that has let that fire in me.”

Taking place simultaneously across the other side of the vast Copper Box arena was the Plate final for teams who had lost in the first round but then won their respective Plate Regional Finals to reach this final stage. 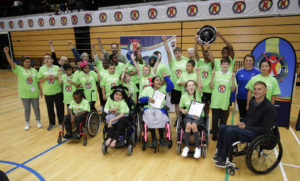 An emotional Maria Papazoglou, PE teacher at Whitefields School, reflected: “Just to be here, let alone win, is such an amazing experience. I used to be an Olympic athlete myself, but this is a different feeling as myself and the students have put all that effort in; now this is the pay-off. The teamwork from them has been incredible.”

Before the action began, the traditional Panathlon Oath was read out by Croydon team member Ellie Bowen, 14, of Riddlesdown College (pictured below with Tanni Grey-Thompson). “It really meant a lot to me to do that,” she said. “I was a bit nervous though, don’t ask me to do it again!” Ellie was thrust into the role as the planned Oath reader, Rukshar Ahmed of Kingsley High School, sadly arrived too late to take to the microphone.

Ellie’s PE teacher, Liz Johnson, said: “Ellie has always got a smile on her face and has a great sense of humour. She embodies the spirit of what goes on here and is always encouraging others. We’re a mainstream school and these children are used to being bottom of the class in PE. They are not able physically, so coming here shows them they are capable of achieving great things when it’s an equal playing field.” 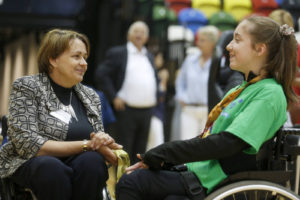 The competitiveness is also what makes Panathlon Ambassador Liz Johnson (yes, another Liz Johnson!) so passionate about her role. She said: “There are so many initiatives out there that introduce disabled young people to sport and are all about participation and inclusion, but I’ve learned so much as an para-athlete from winning and losing. That is no different for these Panathletes here today.”

Fellow Panathlon Ambassador Steve Brown, the 2012 Great Britain wheelchair rugby captain, added: “I just love what Panathlon does and what it stands for.

“For these young people, they’re here because they’ve earned their right to be here. This is a final. That’s huge for their togetherness, self-belief and confidence. It’s about being part of a team and progressing through stages. If they can do it here, it makes them believe they can achieve in other areas of life too.”

The day’s Young Leaders were provided by Colchester High School, Seven Kings High School in Ilford, UEL and some only slightly less ‘young’ leaders from Blue Bay Asset Management. One of them, Deputy Company Secretary Dee Upton, said: “It has been a very rewarding experience to see what Panathlon do and how that impacts the young people. One of my favourite things was seeing how teams cheer on their rivals. It has been quite emotional, in a nice way!” 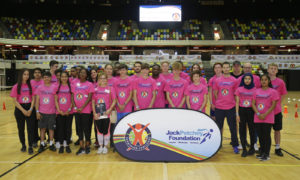 More reaction to Thursday’s events at the Copper Box Arena from competitors, teachers, parents and funders will follow over the coming days.

Browse the best pictures from the Copper Box Arena here.

Check out all the results here.