The Jack Petchey Foundation, Panathlon’s longest-serving supporter, has now invested more than half a million pounds in the charity.

The Foundation has supported Panathlon’s work in providing sporting opportunities to disabled young people in London and Essex for over a decade, during which time their total investment has reached a staggering £512,272.

The milestone was marked at the east London Panathlon final, where Panathlon patron Helen Turner received a commemorative cheque from Schenell Stephens, grants officer at the Jack Petchey Foundation.

“This is a fantastic milestone,” said Helen. “The half a million pounds invested by the Jack Petchey Foundation in Panathlon has helped to make a real difference to the lives of thousands of disabled young people over more than a decade.

“Everyone at Panathlon is very grateful to the Foundation for their continued support over the last 11 years and we look forward to the partnership continuing for many more years to come.”

The Jack Petchey Foundation was established in 1999 to support organisations that work with young people aged 11-25. They made their first grant to Panathlon in November 2004 for the sum of £10,000 to help us expand our work in east London. 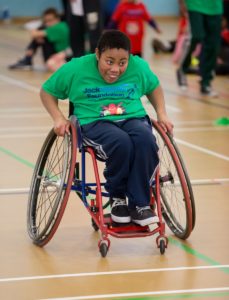 Since then the Foundation’s funding – part of more than £85 million it has donated to good causes – has helped Panathlon provide sporting opportunities to more than 10,000 competitors in London and Essex, with over 100,000 active hours of sport delivered in those 11 years.

The Foundation’s latest grant, for £89,786, will support the provision of 42 Panathlon competitions involving 1,835 disabled people in London and Essex in 2015.

“We’re very proud to support Panathlon,” said Schenell Stephens. “At the Jack Petchey Foundation we’re all about achievement. Everybody has the potential to achieve and people achieve in different ways.

“Panathlon caters for young people who tend to get overlooked sometimes and helps them achieve. They give disadvantaged young people a great platform and a great opportunity. The fact that Jack Petchey has ploughed over half a million pounds of his money into Panathlon shows how keen he is for the programme to continue and how proud he is of the partnership.”

Thanks to the support of the Foundation, Panathlon has also been able to train over 1,000 young people as Panathlon Young Officials, whilst the Jack Petchey Outstanding Achievement Awards have been celebrating the achievements of some of Panathlon’s most remarkable individuals since 2009.

Whilst both Panathlon and the Jack Petchey Foundation have their roots in London and Essex, the constant funding provided by the Foundation has allowed Panathlon to expand, working with other funders to provide sporting opportunities across the country.

Panathlon now reaches 23 counties and all 32 London boroughs and continues to grow nationwide – 30 counties are set to be involved by 2017 – but it was fitting that this particular milestone was marked in east London, just a few miles from the Jack Petchey Foundation’s Ilford base.

“Being here today you can really see where the money goes,” added Schenell. “It’s a privilege to be here. We’re very much involved in getting out there and seeing the work that’s being done. It’s not just about giving money. We make sure that the providers that we work with are actually going good work with young people.”