The team, made up of students from Five Acre Wood, Grange Park and Valence Schools, pipped Canterbury and reigning Kent champions Ashford to the title in the tensest of three-way finishes, ahead of the team from Sheppey & Sittingbourne.

New sports minister Tracey Crouch and Paralympian Steve Brown were among the excited spectators as 95 young people from seven schools competed in the final, part of the wider Kent School Games programme and the culmination of three qualifying rounds involving 241 competitors from 18 schools.

Jo Eames, director of sport at Valence School, said: “Malling & Sevenoaks’ partnership of schools has never won before and we are thrilled! It’s also a wonderful opportunity now to represent the county of Kent in the wider south regional final in the Autumn against other winning counties. We are so delighted and we have made great friends with the rest of the schools in our partnership.”

In perhaps the closest Panathlon final of the year, the scores couldn’t have been tighter after five sports. Ashford and Canterbury were tied for first place, with Malling & Sevenoaks just two points behind, meaning the 2015 Kent champions would be decided in the day’s final event. 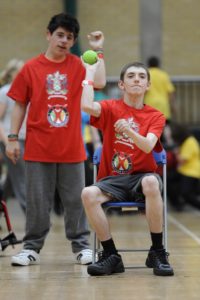 Victory in the athletics races put Malling & Sevenoaks level with Canterbury on 46 points, with M&S crowned champions on ‘countback’ having won two events to Canterbury’s one. Reigning champions Ashford were edged into third on 44 points. A full breakdown of scores can be seen in our results grid.

Hannah Campbell from Grange Park School, a member of the winning team, said: “As long as the children achieve, they are happy and Panathlon gets all abilities of people to take part in sport.”

Dave Clay from Five Acre Wood said: “Panathlon absolutely boosts confidence. We have been excited all week about coming here to the final. It is something everyone can take part in.”

His words were echoed by new sports minister Tracey Crouch (pictured above left), who was present to see Panathlon in action and to award medals to participants. 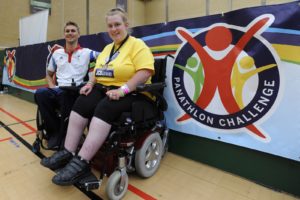 “Its great to be back to another Panathlon event again so soon and seeing such determination on the faces of all the competitors,” said Steve. “It’s fantastic to witness the high sporting ability at the final.”

One of the many students Steve met was Charlotte Whale of John Wallis Academy (pictured with Steve, above), who was competing in her last Panathlon competition after representing Ashford for the last eight years.

“I don’t do any sport other than Panathlon. It is my world!” said Charlotte. “I’m now 19 and am leaving school to go to College. This is my last competition and I’m really sad, but I have had a fantastic time over the last few years, especially the years that we won!”

The Malling School once again provided young leaders for Panathlon in Kent, with some leaders from previous years coming back especially for the event, having previously been inspired by Panathlon’s young competitors.

The 18 leaders from The Malling School, supplemented by 10 leaders with learning difficulties from Ridgeview School, all did a superb job officiating several sports.

James Barnes, PE subject leader at The Malling School, said: “Its fantastic to see so many of our students inspired by being young leaders. They learn so much from being involved throughout the year in Panathlon. It’s also fantastic for the Malling & Sevenoaks area to win the Kent title for the first time.”

Also on hand to present medals at the finals were Eveie and Anna-Lisa, representatives from the Medway VW dealership, part of the JCB Group, who have several vehicle dealerships across Kent and the south east and are one of Panathlon’s longest-standing sponsors in Kent.

“All the children are extremely inspiring and they have alll worked really hard for their medals,” said Anna-Lisa. “We feel humbled to have been part of this and we have had a fantastic day.”

Rosie Tribe, from Sheppey & Sittingbourne, said: “Thank you to Panathlon for another excellent competition. All the athletes enjoyed the opportunity to compete at a county level, having trained hard at school.”