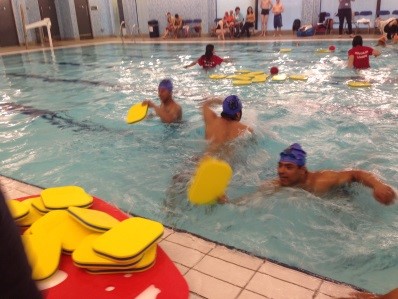 On the 23rd January, Panathlon held a swimming competition for West London Boroughs at Northolt Leisure Centre in Ealing. Four teams attended comprising Belvue School, Perseid School, John Chilton School and The Village School. The 25 students had the chance to compete in 4 individual races and 4 team challenges including the raft race, ball shuttle race, push and glide and the treasure hunt.

With Belvue School and John Chilton School taking early leads in the 25m freestyle races, the two teams continued to test each other throughout the day and put some distance between themselves and the other teams. However, impressive and consistent performances from Perseid and The Village saw them claw their way back into contention. It was the final two races that proved to be the clincher with the Belvue School scooping the gold, John Chilton taking silver, The Village in bronze position and Perseid taking the runners up spot. All students had a really enjoyable day out and we’ll hopefully see them again at future swimming events.

A huge thank you must go to the leaders from Mill Hill School who helped run the event. They showed initiative beyond their years and received fantastic feedback from the attending teachers.

“This is the first Panathlon swim we have attended. Thank you for a fantastic day. It’s been really enjoyable and our students have loved taking part- we’ll certainly come to again.”
Jon Bath, Teacher at the Village School

“Thank you for today. It would have been nice to get gold but we have all had a really great time”
Zoe Brown, Student at John Chilton

“We were all really impressed today with the organisation and we will certainly attend again. All students enjoyed themselves and I’d also like to mention the leaders were brilliant with our students.”
Trish, Teacher at Perseid