With the Olympic Stadium as a backdrop, inspirational teenager Faizan Bidiwala of Little Heath School in Redbridge has been crowned the 2014 Panathlon Challenge Outstanding Achiever.

16-year-old Faizan, who has Downs Syndrome and underwent a life-saving heart operation three years ago, received the prestigious honour at the 2014 Jack Petchey Outstanding Achievement Awards, held in the Olympic Gallery at John Lewis Stratford City.

The Little Heath School student collected his award from triple-Paralympic medallist Liz Johnson, having been selected from a shortlist of five inspirational individuals out of the 4,000 disabled young people to take part in the Panathlon Challenge this year. 15-year-old Scott Pope, from Dagenham, was runner-up, while 11-year-old Malik Berbiche, from Harefield, was highly commended in third place (details below).

Jen Christensen, teacher at Little Heath School, said: “We are extremely proud of Faizan. He has always worked so hard and strived to succeed, but he always wants to make sure that everyone is involved in the process as well. This is a huge achievement for Faizan. It’s amazing.” 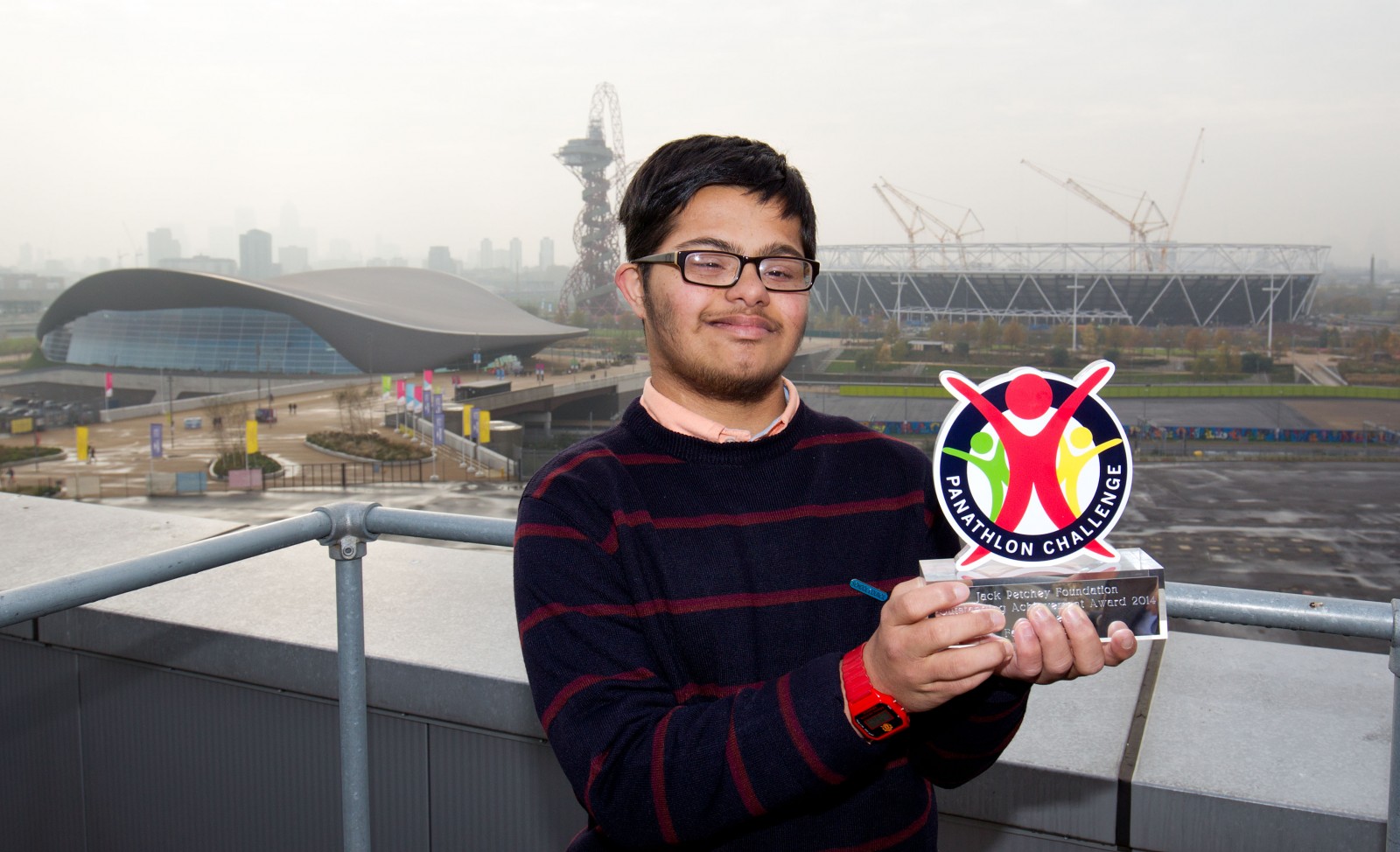 Having arrived in Ilford from Pakistan three years ago, Faizan soon had to undergo major heart surgery at Great Ormond Street Hospital to correct a heart condition that left him short of breath after even a small amount of exercise.

A big sports fan, Faizan was keen to get more involved in PE classes as soon as he had recovered from his operation.

He joined with a number of Panathlon activities and has since gone on to represent his school at boccia and cricket. He was a key member of the Redbridge Panathlon team, who won the London Plate Final at the Copper Box Arena in the Olympic Park in June.

Danial Bidiwala, Faizan’s father, said: “I am very proud of Faizan and very happy for him to receive this award. He is a very good boy, no doubt about it. Panathlon has helped Faizan, by giving him a platform to develop. He has done very well and we are very happy about it.”

Panathlon ambassador Liz Johnson said: “Faizan is so inspiring. Before his heart operation, he couldn’t run a few steps without getting out of breath. Today, he leapt up to the stage to receive his award. You wouldn’t recognise him as the same child as that his teacher described previously.”

Phillip Allinson, Head of Events at the Jack Petchey Foundation, said: “We’re tremendously proud at the Foundation of our work with Panathlon. It is incredibly important that we recognise the achievements of these young people and also the thousands who take part in sport through Panathlon. Sport is a great leveller. It’s amazing when people can work together and be part of a team, support and encourage each other to achieve and succeed. That is what Panathlon does. At the Jack Petchey Foundation we want to celebrate achievement, so we’re very proud to be part of this.”

John Lewis Stratford City have supported Panathlon since the London 2012 Olympic and Paralympic Games. The store overlooks the Olympic Park, where this year’s Panathlon London Final took place at the Copper Box Arena in June.

Ruth Scharvona, Managing Director at John Lewis Stratford City said: “We’re very proud to support Panathlon and their work in providing kids with a range of disabilities a chance to participate in sport. It’s great to see their work come alive through events like the final at the Copper Box here at the Olympic Park.

“It was amazing. The noise, atmosphere, excitement and competitiveness – you really felt it in there. It’s great to see the Olympic and Paralympic legacy doing what it’s meant to do. We’re thrilled that our relationship with Panathlon, which started with London 2012, is still going strong two years later.”

John Lewis Stratford City has been a firm supporter of Panathlon since the London 2012 Olympic and Paralympic Games, when it was selected by staff as one of four local charities to support. The store has provided their Olympic Gallery Suite as the venue for the Jack Petchey Awards for the last three years.

To read more about Faizan and the reasons for his award, including more reaction from those people who know him, take a look at Faizan’s Panathlon story. More information on second-placed Scott Pope and third-placed Malik Berbiche can be found below.

The awards ceremony also saw Jason Bates of Sherwood Park School in Sutton collect the Sporting Achievement Award and David Ejinkonye of St Paul’s Academy in Greenwich named as the Young Leader of the Year.

Scott is registered deaf. When he arrived at Eastbrook School in Year 7 he lacked confidence and found it difficult to fit in, so wouldn’t get involved. This all changed when Scott went to Panathlon during his first year at school and he hasn’t looked back since, taking part in numerous sports, winning medals and breaking Panathlon records.

Through Panathlon Scott has made friends and realised that, despite his disability, nothing is impossible. He now even plays for the school at both football and cricket and is assistant football coach. Inspired by sport and the confidence it has given him, Scott is now studying for a BTEC in PE.

Brenda Goodwin, teacher at Eastbrook School, said: “The transformation in Scott during his time at Eastbrook has been incredible. He doesn’t look on himself as someone with a disability now and goes out of his way to help and guide others.  He has made many friends across the school who accept him for who he is and he’s a role model within the Panathlon squad.”

Liz Johnson, Panathlon ambassador said, “Scott is a great example of someone who just needed their potential unlocking. It’s all to do with confidence and being comfortable with who he is.

“Once you are comfortable with who you are then you don’t care what other people think about you and you put forward a much more positive representation of what you’re about, what you can achieve and the type of person you are. That has definitely happened to Scott. He’s gone from someone who didn’t really want to take participate to now leading in his school and developing other people, wanting to show others what they can get out of it.

“He’s almost gone full circle in Panathlon and that’s great, because that’s how the Panathlon Challenge evolves and develops. It breeds off the success of its alumni, the people who have got lots out of it and feel it is worthy of taking to the next generation. 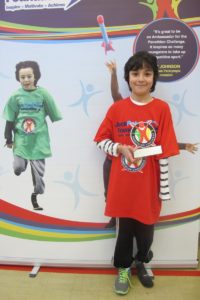 Malik suffered traumatic amputation of his arm and lower leg as a four-year old and needs almost annual surgery on his leg as his bones continue to grow.

When he joined Coteford in Year 3, he was quite reluctant to get into any sport that made him look different but, through adaptive sports and Panathlon, sport has become a big part of Malik’s life and being given a ‘blade’ in March 2013 has transformed him.

Sport has helped Malik’s confidence and given him a sense of achievement. Malik has never let his disability hold him back and, for the last year, he has helped others by teaching Panathlon sports to our younger children.

Larayne Harris, assistant headteacher at Coteford Junior School, said: “We’re very proud of Malik. His attitude to school life is as close to perfect as you could wish for. He’s a very popular boy and an inspiration to everyone he meets.

“He demonstrates that young people with disabilities can still achieve success and can lead happy lives. Malik’s enthusiasm for sport was enhanced by the London 2012 Paralympics and one day he hopes to be a Paralympian himself. If it were to happen, nothing would please me more.”

Panathlon ambassador Liz Johnson said: “Malik is fast becoming a regular at Panathlon. Sport is providing him with a platform to achieve and to realise that he can overcome his adversities.

“Malik is a good example of someone within Panathlon who could potentially be a Paralympian.

“The great thing about Panathlon is that it provides sporting opportunities to people with all types of disabilities, impairments and illnesses, but not all of them have impairments that are eligible for the Paralympics. Malik’s is, of course, so he can legitimately set his sights on being a Paralympian.”

⚠ This content is not available at this moment unfortunately. Contact the administrators of this site so they can check the plugin involved.
Go Back