Thurrock have been crowned Panathlon Essex champions for the second consecutive year on a record-breaking day at Basildon Sports Village.

“It’s been a great day,” said Brandon Mullins, Head of PE at Beacon Hill Academy. “Obviously we’re happy with the result, but always it’s best to come here and participate in such a great event. We’re very happy. We didn’t expect to get three national records, that’s for sure. I can’t say we’ve had a better day!”

The 13-strong team – made up of students from Beacon Hill Academy, Ockenden Academy and Harris Academy Chafford Hundred – won five of the day’s six events to win the final with a massive total of 56 points. Colchester were runners-up courtesy of victory in new age kurling, having finished tied on 44 points with West Essex, who finished third. A full breakdown of scores is available on our results pages.

An exciting final was enjoyed by more than 40 disabled students from six Essex schools, but none more so than the two record breakers.

Sally McNeill, a student at Harris Academy Chafford Hundred, put in a stunning wheelchair slalom lap of 20.18 seconds to break the previous record of 23 seconds, set by her friend Dillon – a member of the Harrow team – in June 2014.

“I’m really pleased,” said Sally. “I’ve been trying to beat my mate’s record for ages, so he can’t brag any more. It feels really good. Plus he’s too old to compete now, so he won’t be able to beat it!”

Brandon Morris, a pupil at Beacon Hill Academy, beat his own Panathlon javelin record with a throw of 26.5m – beating by previous best by 20cm – and also broke the seated shot putt record by 5cm with a throw of 13.3m.

“It feels really good,” said Brandon. “I’ve been doing javelin my whole life. It’s a combination of momentum and strength that you need. I really enjoy Panathlon. It’s great to see people having fun. It’s not just about the winning.”

The Panathlon Essex final brought together the strongest qualifiers from the north and south Essex finals. The competition involved over 100 competitors from 11 schools across the county, part of the wider Essex School Games programme. Unfortunately transport issues on the day meant that north Essex champions Harlow were unable to make the final, making it as a three-team event. 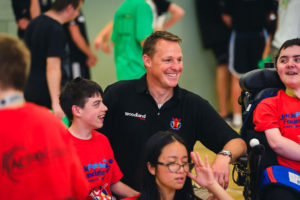 Paralympic gold medallist and world record holder in the 800m (T46 category), Danny Crates, said: “I’ve been coming to Panathlon events for years and what never ceases to amaze me is how much enjoyment the athletes get from the competition and how competitive they are. But what is truly amazing is how the event has now grown. With over 200 events a year now, Panathlon really has cemented itself in the sporting calendar.”

Panathlon provides sporting opportunities for over 6,000 disabled young people each year, across London and 26 counties nationwide. More than 400 schools have taken part in over 100 of Panathlon’s ‘mini Paralympic’ competitions in 2014/15, with over 50,000 active hours of sport provided to disabled children.

Panathlon’s work in Essex is made possible through the support of Active Essex, the Jack Petchey Foundation, the Woodland Group and the Hilton Stansted Airport.

Dawn Catley, education engagement officer at Active Essex, said: “Panathlon is great because it allows more children the chance to join in and compete. It’s an event that doesn’t focus on their disabilities, but on what they are able to do. It levels the playing field and the children are all enjoying themselves today. It’s fantastic.”

Thanks to the students from Great Baddow School in Chelmsford acted as sports officials for the Panathlon final, overseeing the competition events. The students are among 1,300 young leaders trained by Panathlon to officiate at their events right across the country.