Fetherstone High School hosted the first Panathlon Challenge in 1995! They have hosted 25 competitions since over the last 20 years and yesterday was the latest!

The west London boroughs of Ealing, Hillingdon, Hounslow and Richmond took part in their first competition of the year. 20 years on from the first ever Panathlon at Featherstone High School, today’s competition continued the legacy with 96 competitors from 13 schools supported by 18 leaders involved.

The competition was close between Hillingdon & Richmond for 1st place, and Hounslow & Ealing for 3rd place. Richmond won Boccia, Table Cricket & the Field Athletics. Hillingdon won the Polybat & Flat Athletics, and were only 4 points behind of a victorious Richmond. 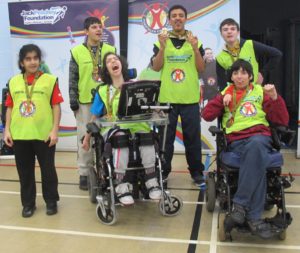 Louise Ross, teacher at Strathmore said, “This year, in the run up to this competition, we concentrated on practicing Table Cricket. We worked on the skills and the players tactics. We’ve gone from Bronze, our worst result last year, to Gold today. I am really glad their (& our!) hard work has paid off. We’re looking forward to the next round in March.”

Hounslow won the Kurling competition, and overall finished with 34 points, the same as Ealing. Hounslow took 3rd place courtesy of their Kurling result.

Outstanding team performances of the day included Hillingdon’s Table Cricket team scoring 336 runs, and their Boccia Team scoring an end 6-0 in one of their matches. Despite these great achievements, the highlight of the day for me was to watch the Powerchair Slalom with 7 powerchair users competing. And, with 2 other powerchair users that didn’t make their slalom teams, all of which raced against each other, come race 1.

For a full breakdown of results see here. 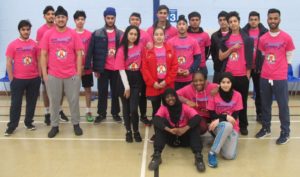 Featherstone High School also have been providing Young Leaders for Panathlon for many years, and pictured on the left here are the latest recruits! Thanks again for officiating so well.

We look forward to seeing Richmond & Hillingdon in the regional Champions final and Hounslow & Ealing in the regional Plate finals which take part on Monday 21st March at St. Mary’s University in Twickenham.