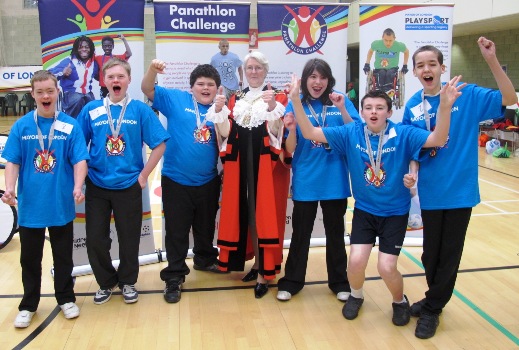 Panathlon were in West London for the opening competition involving teams from Harrow, Hillingdon and Brent. With 2 teams to go through to the West Final the race to be the new Panathlon Champion for 2012 has begun. If todays standard of play is anything to go by, then we are not only in for a year of good sport but also one full of surprises!

Today’s surprise was the Hillingdon team, who followed up their good result in the football last week with wins in the Polybat and New Age Kurling. At lunch Hillingdon were in joint first position with Harrow, who continued their good form from previous years, taking the Boccia, Table Cricket and Field Athletics events. A couple of performance of note from the Harrow team was Dillon’s Powerchair Slarlom of 31 seconds and Kotetsu’s standing long jump of 2.30m. Both phenomenal achievements. This has inspired me to start a Panathlon Book of Records for 2012 to see if any athlete this year can better these scores!

Brent did particularly well in the Athletics Races, only just missing out on maximum points, and in the Polybat were unlucky to come in 3rd place – All the 3 Polybat teams had 2 wins each, then all had 5 games won each – so it went to “points difference” to separate them.

“I enjoyed it so much especially when I got a gold medal in Boccia. We worked very hard throughout the tournament and we feel really happy to be part of this competition.” Hillingdon Team Member from Coteford School.

As Hillingdon lacked Powerchairs they struggled to gain enough points in the afternoon but have they have reached their first final ever! Congratulations to them and to Harrow, we’ll see them again in the West Final.