Panathlon enjoyed one of the biggest days in its history with 247 children taking part in a triple-header of events across London and the south east today.

26 schools contributed to teams who gave their all in the first round of the South London Panathlon, a Primary Panathlon in Essex and a ten pin bowling event in Suffolk.

Among them were Doucecroft School in Colchester, who took part in their first ever Panathlon event – the Essex Primary Panathlon held at Columbus School & College in Chelmsford.

Doucecroft competed with seven other Essex schools, each of which had previously been involved in Panathlon’s regular multi-sport events. 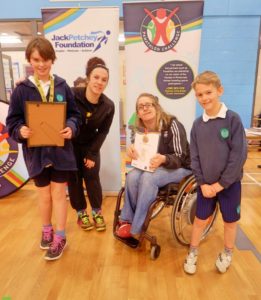 64 children took part in the Primary Panathlon, which provides an introduction to Panathlon for five- to 11-year olds, building foundation skills in a range of Panathlon sports.

There to lend a hand officiating the new age kurling competition was Paralympic swimming champion Fran Williamson (pictured right with the winning school and Stacey from the Les Mills Fund for Children, who have supported Panathlon’s recent work).

A big thank you to Columbus School and College for hosting yet another Panathlon competition and to St John Payne school for providing a group of excellent Young Leaders.

Whilst many of those Essex youngsters got their first taste of Panathlon, 90 children were in action in this year’s South London Panathlon, in a first round tie held at St Paul’s Academy in Greenwich.

The winners after a tight day’s competition were last year’s London finalists Bromley, who put in another strong performance with victories in the table cricket and the two athletics disciplines.

Joining them in the Champions Final are Greenwich, who finished second after a consistent performance, which included a clean sweep of victories in their polybat matches.

Third overall were Kensington and Chelsea, who had an astonishingly good new age kurling team, winning all their matches and scoring over twice as many points as any other team.

Joining them in March’s Plate Final will be Bexley, who pipped eventual champions Bromley to boccia gold in the last game of the competition.

The competition was supported by St Paul’s Academy and their young leaders, who acquitted themselves very well throughout the competition. A full set of results can be seen here.

Having taken in the action, Panathlon school ambassador Adil Ghani described the competition as “another great Panathlon event”.

“It’s a great venue and nice to see so many young Panathlon leaders taking to their roles. A job well done by the leaders,” he added.

“All the teams showed the Panathlon spirit and competed to a high level. It was enjoyable to see Bromley, my old team, continuing their winning ways!”

Rounding off the triple-header was the Panathlon ten pin bowling competition, which involved 93 children from 10 schools across Suffolk.

In the Discovery competition, six schools were split into 12 teams with two All Star teams taking part. After a competition full of strong and consistent performances, one of the teams from Ipswich’s Suffolk One sixth-form college took first place (average of 96 points), with Ipswich Academy (83.95) edging second place ahead of Ipswich’s Northgate High School (83.8).

After a fantastic day of competition, one happy teacher said: “Thank you for today. It’s great to get the children who don’t usually get the chance to represent the school at sport out and competing. It is great for their confidence.”

Thanks to everyone involved on a memorable ‘Triple-Header Tuesday’, which saw three events involving two counties, four London boroughs, 26 schools, 41 young leaders officiating and 247 children competing on a fantastic day of sport.