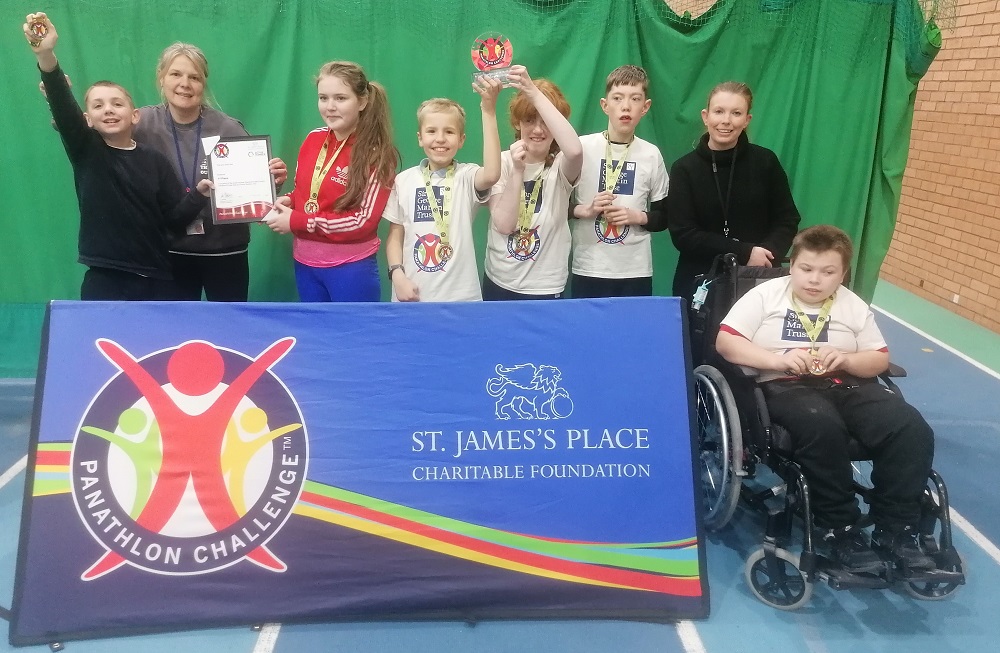 Panathlon’s positive ripple effect on schools was very much in evidence as seven teams descended on the Costello Stadium for the Active Humber North Bank Primary Multisport Finals in Hull.

Thursday’s event in Hull clashed with World Book Day, but there was no question of any of the young competitors preferring to stay in school and wear a Harry Potter outfit over a trip out in their trainers and a Panathlon t-shirt!

The event showed that Panathlon has definitely picked up from its strong position in East Riding before the pandemic. Our Primary Finals on either side of the Humber on Thursday and Friday were the culmination of a pathway of primary qualifying events across the region held in partnership with Active Humber this academic year.

All schools at Thursday’s North Bank Final in Hull had Panathlon pedigree – some going back over four years – and it was fascinating to see how our influence had permeated school environments and influenced individuals.

All Saints Primary from Hessle, who won mainstream gold medals (the event was split into two competitions for mainstream and special schools), have started an in-school Panathlon sports club on Friday lunchtimes led by Year 5 and 6 pupils. They even wear their Panathlon t-shirts and medals whilst leading activities. Fifty children from younger year groups take part.

Year 5 pupil Tommy said: “I really enjoying leading at the club. The younger ones always listen perfectly. I enjoy leading them just as much as playing sport myself.”

He added: I was really nervous coming here today; my heart was thumping. My mum will be proud! I’m going to wear my medal for the rest of the week at school.”

Whilst holding the team trophy, Year 6 pupil Safi said: “I would give today 100 out of 10! I’m going to put my medal on my cat because she likes shiny things!”

All Saints Head Teacher Laura Jackson said: “When the children returned from the qualifying competition they were on an absolute high and brimming with confidence. We’ve really seen in PE lessons that they are more confident in their own ability and have higher self-esteem. When we told them they had qualified for today’s final round they were utterly thrilled.”

Alderman Cogan’s Primary in Hull have bought boccia and new-age kurling equipment for use in PE lessons and sports clubs having been inspired by previous Panathlon competitions.

Jane Hesp, PE coordinator, said: “One of our team today didn’t particularly like PE, but since he’s come to Panathlon he now throws himself into lessons and is far more engaged in PE at school. Coming here and finding out that he can achieve things and enjoy it has broken down a big barrier for him.

“Ever since we told our SEND children there was another Panathlon competition, they have been so excited. Every child deserves a chance to have a go. We’re back in the hall for assemblies now [post-Covid] and we can’t wait to give these children the chance to show the rest of the school what they’ve achieved.”

“We’ve been practising doing parachute popcorn and precision beanbag,” said Learning Support Assistant Rachael Smith. “The children enjoy going back in the t-shirts and showing their peers what they’ve won. It gives them a real sense of achievement.”

Bellfield Primary, who finished with silver medals in the mainstream event, have a trophy cabinet and photo collage in school showing highlights of their four years competing in Panathlons.

PE coordinator Tracy Cowap said: “Because they don’t tend to get picked for the school teams, this competition is for them. It shows other children in our school that they can come to competitions and represent school. They learn confidence, perseverance and teamwork.

“These children don’t normally work as a team, they tend to keep themselves to themselves. They are quite quiet and don’t like to participate in front of the whole class. But here they’re in a whole different world. They are absolutely loving it.”

This year’s series of Panathlon primary competitions in East Riding, culminating in this week’s two finals days, was organised with us by Jo McDonald, School Games Development Manager at Active Humber along with East Riding School Sports Partnership.

Jo said: “Panathlon gives us a much more solid and robust programme for SEN and special schools in this area. We have other events for SEN children but our calendar is way more chunky because of Panathlon.”

For the remainder of the academic year, that calendar includes primary and secondary Panathlon swimming and multisport competitions, a second competition for Pupil Referral Units and a potential ten-pin bowling event. It is a rapidly expanding programme which will give SEND pupils huge opportunities.

“The competitions are so fast-paced and colourful,” says Jo. “There’s no time for them to get bored or be sat waiting for their turn. The atmosphere in the room is so exciting.

“It’s an absolute no-brainer for Active Partnerships and schools to get involved in Panathlon. It’s an ideal partnership: Panathlon comes fully-boxed, delivered by experts, and I provide the rapport and connection with the local schools.

“I always like to think about the conversations the children have with their parents at tea time after a Panathlon. They will still be wearing their t-shirts with their medal around their neck. For these kids who don’t get so many perks and chances to achieve in their lives, it’s utterly amazing.”

Tony Waymouth, Panathlon’s Chief Operating Officer, said: “The work put in by the Humber region’s School Games Organisers through the pandemic kept the Panathlon flame alight with our Virtual Programme. Now that we are able to hold face-to-face competitions again, it is so gratifying to see the region throw themselves back into it so wholeheartedly.”

Panathlon continued its rapid expansion on Humberside on Tuesday as eight teams came together at Hull’s Costello Athletics Stadium for our inaugural Humber Primary Multisport Final.  Over 50 children from…

The Humberside region has been an area of rapid expansion for Panathlon over the last few years, building lasting relationships with key organisations in the region. School Games organisers incorporated…