There was just one point separating gold from silver at the Panathlon Central Swimming Final at Stoke Mandeville Stadium when Addington School in Reading emerged as winners of both their Berkshire heat and overall champions against schools from Bucks, Beds and Oxon.

In a fierce contest, Addington triumphed with 50 points to retain last year’s title as Panathlon Central Swimming champions, which means they will return to the London Aquatics Centre at Queen Elizabeth Olympic Park on July 6 to compete for the South of England title.

”We can’t wait to go back to the Olympic Pool,” said Addington PE teaching assistant, Jono Malone. “It’s easy to say, but our main focus is on having fun today and enjoying the challenges that Panathlon gives us.”

Pupil Connor, 15, was pleased with his gold medal. He added: “I have enjoyed myself. I won a race but it is being able to participate that is important.” 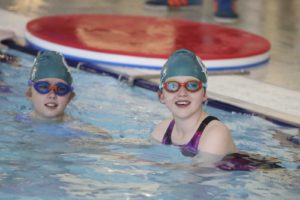 Winning silver with her classmates was a fantastic birthday present for Libby, from Henlow Academy in Bedfordshire, who celebrated turning 11 at the event. “I’m feeling really happy and very proud and very proud of my teammates,” she said. “I am pleased I got a Panathlon towel as a present before I go home and open some more.”

It was a first outing at the swimming for Henlow, who pocketed 49 points, although the school competed in a primary Panathlon in February. Teaching assistant and sport ability coordinator Alison Day, said: “Everyone was very excited this morning. It’s been a fantastic opportunity to represent the school and a great team challenge. We are very grateful to Panathlon.”

Taking bronze with 45 points were Arbour Vale from Slough – a school that regularly competes in other Panathlon challenges. Assistant head of PE, Kevin Hughes, said: “We won silver last year and because the score was so tight, we got to compete in the finals in London. This year we have an almost new team. It’s been fantastic for the pupils, as Panathlon always is. It’s a fantastic organisation.”

A proud mum and grandparents were in the spectator gallery watching Oliver Brown, 9, from the Redway School in Milton Keynes, swimming in his first Panathlon. Mum Louise Brown, from Olney, said: “Oliver likes swimming and I have just signed him up for extra lessons. It is just awesome to see him here today and see them all really enjoying it. Panathlon is doing a grand job.” 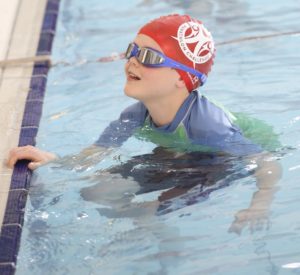 After competing Oliver (pictured right) said: “This is really good. It’s been amazing to swim a whole length in a race.”

The day’s Young Leaders were provided by Sir Herbert Leon Academy in Bletchley and they officiated both in the pool and poolside. The leaders are studying for Level 3 BTECs in sport and PE teacher Paul Read said the Panathlon experience contributes to their course: “For some of our students it has meant more than just what they do on the day and for course marks. It’s about seeing there is a life outside Bletchley and teaches them life skills. For some students it has helped them stand out when they applied to go to university. Panathlon offers a chance to people from a deprived area.”

Overall gold, silver, bronze and participation medals were presented by Panathlon VIP and Paralympic gold medallist Sam Hynd. Sam won gold in the 400m freestyle S8 in world-record time at the 2008 Paralympics in Beijing. He went on to win a bronze medal in the same event at London 2012.

Sam said: “I love seeing the children having fun and competing. It’s so positive and I am honoured to be part of it. Panathlon is amazing.”

Berkshire winners and Oxon, Beds and Bucks winners both received a trophy and a special trophy was awarded to the overall winners, Addington. 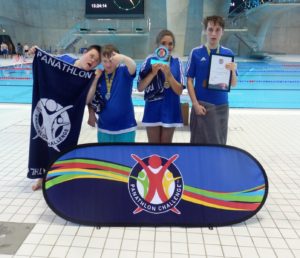 Also competing on the same day, but at the London Aquatics Centre, were John Watson School from Oxford who won the Oxfordshire Panathlon swimming competition and Watling View (pictured left) from St Albans, who took gold for Hertfordshire. Both will return to the Aquatics Centre in July to compete for the Southern Divisional title.

Kevin Larsen of John Watson School (pictured right) said: “This is a great opportunity to swim in a facility like this. We would never be afforded this opportunity without Panathlon. We can’t wait to have another chance here.” 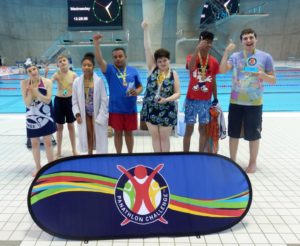 Watling View teacher Wendy Stewart-Smith said: “Thank you very much Panathlon for the opportunity The kids are ecstatic.”

For a gallery of pictures from today’s Central Finals at Stoke Mandeville, click here.

For a gallery of pictures from today’s qualifier at the Aquatics Centre, click here.