Riley Barber was the star of the show as his school, Albert Pye from Beccles, won the North Suffolk Primary Panathlon in Lowestoft on Thursday.

Riley, nine, received an Emma Holloway Foundation Outstanding Achievement Award at East Point Academy from Neil Holloway and was also presented to Norfolk wheelchair racer, Will Smith, who finished fifth in the T54 1500m final at the 2014 Commonwealth Games in Glasgow (pictured left).

When Riley was a toddler, his parents were told that his dyspraxia and learning difficulties would prevent him from reaching many physical milestones unaided, such as riding a bike.

But his participation in Panathlon events has helped him far exceed medical expectations and become an inspiration to other pupils.

Riley, who competed for second-placed Albert Pye B, said: “I am really pleased – I was nearly crying with joy. I am going to keep the trophy on the side and my mum is going to keep it clean. I will take it into school to show my friends. I have really enjoyed the day.”

His mum, Clair Webb, said: “I am extremely proud of Riley. He has grown in confidence ever since he started doing Panathlon events and this has been the first chance for him to represent his school in sport.

“It is fantastic that Albert Pye has become involved in Panathlon. We have had training and events at the school, and now we compete externally in the county. I wish every school would do the same. You can see it in the pupils’ faces how proud they all are competing.”

Stuart McKenzie, sports instructor at Albert Pye, said: “Riley loves all sports and has previously turned up for every trial in every competition.

“He may not have got in, but he has always been very competitive and always wants to improve. He comes to every event and is always enthusiastic and doesn’t take no for an answer.

“He works incredibly hard and it has been so nice to see him improve. This has improved his confidence and been noticed by his classmates.”

Tony Waymouth, Chief Operating Officer of Panathlon Foundation, said: “The award is about recognising someone who goes the extra mile and achieves things, not just in a sporting environment. Riley has taken on a leadership role in his own school and he has achieved something – riding his bike unaided – that has given him independence.

“Riley has inspired others and we are delighted he is receiving the Emma Holloway Foundation Outstanding Achievement Award.”

It was a day of double celebration for Albert Pye, as their A and B teams saw off competition from local rivals Beccles Primary, plus Lowestoft’s Elm Tree and Warren Schools, Hall School from Norwich and John Grant School from Great Yarmouth. Elm Tree were third.

Beccles pupil Adam Pearce, 11, said: “I have never won a medal, so it has been great winning one, especially as I leave the school next week. The whole day has been really fun – I didn’t expect to win.”

Will Smith, who is still waiting to hear whether he has qualified for the Great Britain wheelchair racing team at this summer’s Rio Paralympics, commented: “No matter what their disability, it is important to get children involved in sport. Initially, it has to be fun and provide social interaction.

“This event in particular gives children the chance to try lots of different sports to see what they enjoy and what they are good at.

“It is the first time I have seen something like this, so I was keen to come along and see what it is about.

“Any initiative that gets children involved in sport should be welcomed and they are clearly having a fantastic time. If they enjoy it at first, they can develop later on and there are certainly some children who are really athletic and competitive.”

Noah Williams, of John Grant School, was glowing after the day’s events had finished. He said: “I have really enjoyed it. I liked the table cricket best, as it was good scoring the points. It was nice to try different sports and being all together.”

Will Grant, PE coordinator at Hall School, said: “Last year we were a lead school for an inclusive project in Norfolk and we ran a Panathlon for secondary school pupils. I also ran a Panathlon in 2007 in Liverpool, so I knew all about them and how they can help.

“When I heard about this, I jumped at the chance. It has been great to be part of such an inclusive event that mixes mainstream schools with special needs schools.”

Jenny Cockrill, a teacher at Warren School, one of whose pupils is pictured right, reflected: “Panathlon has been really inclusive for our children. It was a great to see all our youngsters being able to take part. 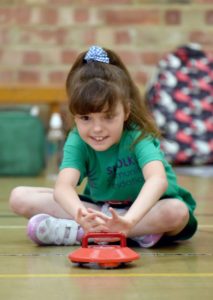 “The organisers have done a great job and all our children are having fun. It is the first time they have taken part in something like this and experienced new activities. We would love to do it again if the opportunity arose.”

Warren pupil Arthur Gilbert, nine, said: “I have really enjoyed it. I quite liked all the games, but my favourite was the parachute popcorn.”

Neil said: “We have kept supporting Panathlon because it reaches so many children. Our daughter loved her sport, so it is very important to see how the foundation can help providing sporting opportunities to primary school children.

“We particularly like the fact it is multi-sports, so they can try everything. It has been a wonderful atmosphere and it is so lovely to see so many smiling youngsters enjoying sport.”

Wendy Herber, Partnership Manager of sponsor Suffolk Community Foundation, said: “We have been delighted to support Panathlon over the years. Our support this year of the Primary Panathlon has seen development beyond what we thought would occur. Seeing it visually today and speaking with the teachers, it brings home how much Panathlon has impacted on the county.” 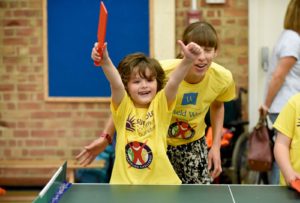