Arbour Vale School flew the Panathlon flag in style at the Lord’s Taverners Under-19 National Boccia Championships in Sheffield on May 20th by winning the physical disability event and finishing runners-up in the pan-disability tournament.

The Slough team were one of nine Panathlon schools taking part in the prestigious 24-team event run by Boccia England and they excelled at the English Institute of Sport, only missing out on a famous double after losing the pan final on a tiebreak to Little Heath School, from London.

Karen Erikkson, Head of PE at Arbour Vale, commented: “It’s brilliant. I’m very proud. The children have made such strides this year. Doing this here in Sheffield makes all the time involved worthwhile.”

Kevin Hughes, Teacher in Charge at the Berkshire school, added: “My teams played extremely well and we are all very proud of their achievements. Our pan-disability team were disappointed that they lost by one point on the tiebreak, but they they will learn  more from losing in the long run.” 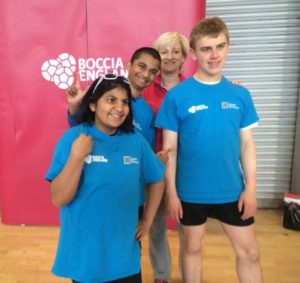 Fiona Bell, Head of Secondary at St Giles School, said: “We came seventh, but we really should have been in the fifth/sixth play-off. We did really well, though. I am very proud of them. Jamie, our ramp user, has only been playing with the ramp for two and a bit months!”

Brandon Mullin, Head of PE at Beacon Hill, said: “The road trip, hotel stay and National Boccia Final was an amazing experience for our students and staff.  The level of skill and competition demonstrated was incredibly high. Lady luck was not on our side, but finishing in the top 10 out of 600 competitors this season is a major achievement and we will hold our heads high and look forward to the future.”

Since 2013 Panathlon has worked in partnership with Boccia England to increase the scope and reach of the Lord’s Taverners competition. This year Panathlon delivered a total of eight county finals and six regional finals across the two divisions, involving almost 3,000 young people across the country.

Also, 444 young officials have been trained to run the county and regional competitions, and some of those were in action in Sheffield, with Sir Herbert Leon Academy (SHLA) in Bletchley providing three of the 10 referees.

Paul Read, Teacher in Charge at SHLA, said: “Our involvement in Panathlon has enabled us to become involved in this competition. Hosting the regional final at our school, the training from Howard and then being involved in Multisport Panathlon has been great preparation. I am suitably proud of the leadership progression that has occurred over the past months and seeing the school referee a national final is just great.”