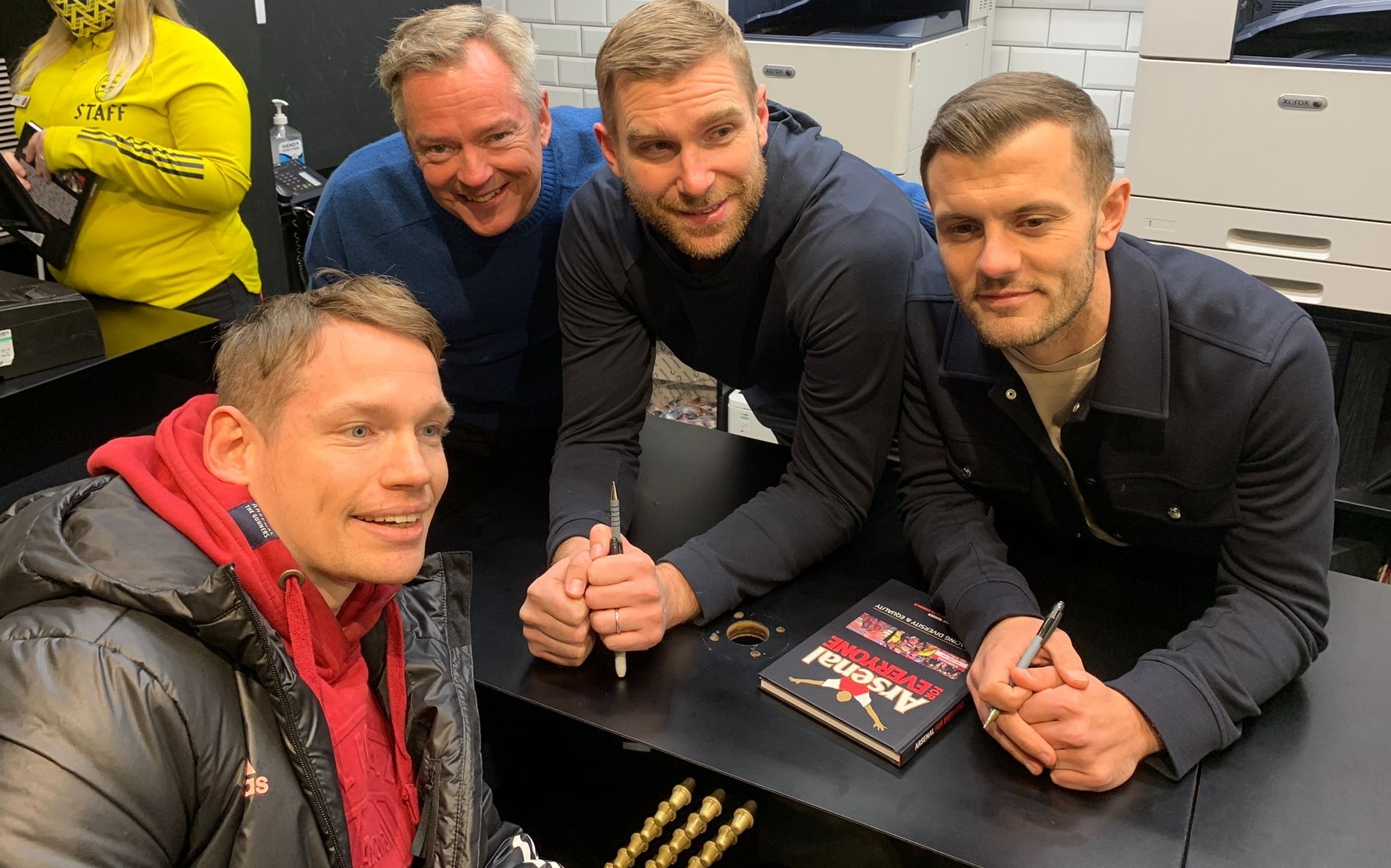 Our ambassador Tom Clements joined Arsenal heroes Jack Wilshere and Per Mertesacker at The Emirates Stadium last Saturday to celebrate the launch of a new book which will benefit Panathlon.

Lifelong Arsenal fan Tom was a former Panathlon competitor whilst at Marjorie McClure School in Bromley. He now works back at his old school as a PE teacher, leading a host of sporting activity and clubs for SEND pupils who look up to him as a role model.

Tom’s journey from being labelled a “challenging” primary school pupil with cerebral palsy to becoming a highly qualified sports coach and respected member of staff is told in the book, Arsenal for Everyone: Embracing Diversity & Equality, by Dave Seager, which was launched last Saturday with the help of former Gunners stars Mertesacker and Wilshere after the 2-0 home win against Newcastle. £1 from every book purchased is being donated to Panathlon.

As the title suggests, Dave is a fanatical Arsenal fan and this is his fourth book (available from the Panathlon shop) about his beloved Gunners – but the first since the death of his son and Arsenal soul mate. Having found his own relationship with his club changed by his loss, he wanted to highlight the stories of those who, through no fault of their own, have found the support of their team framed differently.

That quest led to him encountering fellow Gooner and Panathlon ambassador Alex Brooker, star of Channel 4’s The Last Leg, as well as Tom, whose story is told in the book’s opening chapter.

And what a story it is. It began at his mainstream primary school where, Tom says, “Staff didn’t know how to handle my disability. They just thought I was a bad kid. They put me at the back of the class and didn’t let me get involved in sport which was the thing I wanted to do the most.”

When he joined Marjorie McClure School, everything changed thanks chiefly to one man: Assistant Head and Head of PE, Guy Wilkins. “He just took me under his wing,” remembers Tom. “I learnt more from him as a human being than in lessons. He presented me with challenges that he believed I could do even when I never believed it myself.”

One of those challenges was representing the school and the London Borough of Bromley in Panathlon competitions. After his first event in 2006, Tom’s skills and self-confidence quickly improved, he became captain and led his team to the Panathlon South London title at Crystal Palace.

“What Panathlon did for me was open up a wider spectrum of competition beyond simply ‘the red team vs the blue team’ on the school playground,” says Tom, who’s now 32. “I remember at our first Panathlon event we were awful! I said to Guy, ‘I want to win the next one’. I could see in PE lessons where we were weak and started training and organising the team. I guess that’s where my coaching career began.

“I remember so vividly when we won the title at Croydon and the feeling it gave me and the team. Panathlon have been amazing to me. They made me realise there was all this opportunity out there for me, where previously I’d had none. Panathlon has given me the confidence to go on and do so much. It holds a place in my heart.”

You could say Tom ‘left’ school at 19, but in truth he never really left at all. He was soon back volunteering to run after-school sports clubs and lessons and preparing SEND pupils for Panathlon competitions. Constantly seeking to improve, learn and “spread his wings”, he took numerous coaching courses, becoming the first ever disabled candidate to qualify as a FA Level 2 coach. He has since passed Level 2 cricket and multi-skills and Level 1 tennis. He is currently taking Level 1 basketball.

Two years ago, he was offered a full-time teaching role, partly to fill in for his mentor and hero Guy Wilkins who retired after 30 years’ service at the school.

“I cannot describe what an honour it is to step into his shoes,” says Tom. “I learned so much from Guy that I now know what to do in many different situations. Our staff really miss him as a person and a colleague but we didn’t know how strong he’d made us until we were thrown in at the deep end when he left.”

Tom ensures that Guy’s philosophy continues in the form of the Marjorie McClure flame, which Guy introduced as the PE department’s 2012 Olympic and Paralympic legacy. PE staff base lessons around its values of respect, equality, inspiration, determination and friendship. Next year, the flame is being adopted as the emblem for the whole school.

“This isn’t a job, it’s an honour,” says Tom. “I live and breathe that school. They started the journey that I’m on. It’s an absolute privilege to give back to the school, to the community and to the kids.

“It was my PE teacher that started me on the path I’m on now. If I can inspire any kid with any disability here who thinks, ‘Tom was in the same situation as me,’ then that’s just fantastic.

“When kids thank me after a session, I say, ‘Don’t thank me, it is an honour’. The day this hunger leaves my body is the day I’m retiring. They’ll be kicking me out of that school! If the kids in that hall are happy, then I’m happy. Inspiring them is my passion.

“Planning the lessons is hard work but teaching them the skills and seeing their confidence soar is the most exciting part of the job. I cannot thank Guy Wilkins, Marjorie McClure or Panathlon enough. They are all the people who dropped the little seeds and told me, ‘You can do it!’ And you know what? They were right.”