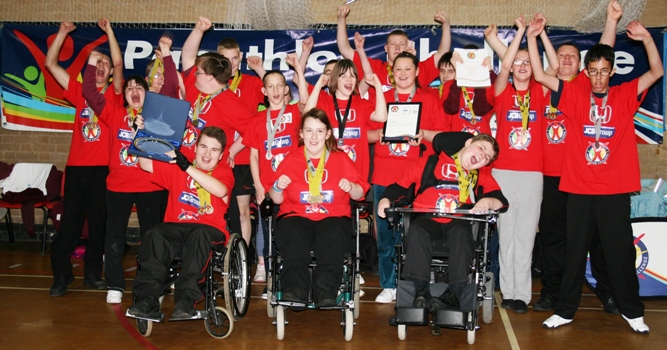 The Team from Ashford completed the line-up for the Kent final of the 2012 Panathlon Challenge after winning the central section at Sittingbourne Community College.

Twenty Kent special schools and over 250 children are involved in this year’s Challenge, with the final on June 13 being held in conjunction with Kent County Council School Games.

Ashford, represented by the Wyvern and John Wallis Schools, were victorious in the new-age kurling, polybat, athletics field and races to notch up an impressive 58 points out of 60. Meadowfield School, Sittingbourne (42 points) were second and follow Ashford into the final in Sevenoaks where they will meet Dartford, winners of the western competition, and Herne Bay, eastern champions.

In third place was Sheppey and Sittingbourne with 38 points and Medway Chatham (Abbey Court and Bradfields, 32) were fourth.

Seventy-five children took part in Thursday’s competition, which was made possible thanks to local car dealership, The JCB Group, who are supporting Panathlon across Kent.

James Tinney, Panathlon event manager, said: “The Ashford team were incredibly strong and thoroughly deserved to make it through to the Panathlon final. We need to also thank the Young Leaders from Sittingbourne Community College who helped us officiate the six sports in the competition.”