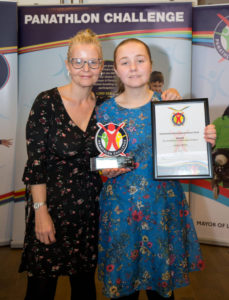 Jessica, 17, won the Excellence in Sport and Leadership Award at John Lewis Stratford City in our 10th annual ceremony, which saw Panathlon reward their top achievers of the year across London and Essex.

Jessica, from Romford, started at Trinity School in Dagenham in September 2006 with no speech and unable to take part in activities independently. She went on to overcome her communication problems and became a leading student who was named the school’s Head Girl this year.

Sport played a key role Jessica’s transformation and she has nurtured a keen interest in the sport of boccia, developing game-specific skills and leadership qualities that have brought success to the school.

She has represented Trinity at several Panathlon boccia competitions and performed superbly, helping her team to a series of victories.

Jessica is also a TEACCH (Treatment and Education of Autistic and related Communication Handicapped Children) Trainer, assisting school staff in the use of structured teaching methods, and is a member of extra-curricular dance, badminton and Panathlon clubs.

Jessica’s teacher Danielle Hawkins, Head of PE at Trinity School, said: “She has overcome so many barriers. Her attention to detail is incredible, she’s proactive in her approach and she’s one of the kindest people in our school. Nothing is ever a chore for Jessica. She is the epitome of what we would like all our students to be.”

Jessica has been part of the Panathlon team representing Barking & Dagenham that has won our showpiece London Multisport Final at the Copper Box Arena for the last three years in a row.

“Panathlon has really helped her develop and in turn she’s helped so many others progress in Panathlon too,” said Miss Kawkins. “She’s played a big part in how successful Barking & Dagenham have been ever year in the London Final.”

The prizes at the ceremony were presented by Panathlon Ambassador and Paralympic gold medallist Liz Johnson, Gemma Juma from the Jack Petchey Foundation and special guest Matthew Key, a top Panathlon competitor from Enfield.

Johnson, who won gold in the 100m breaststroke at the 2008 Games in Beijing as well as bronze at London 2012, commented: “It’s great that these prestigious awards have reached their tenth year. The fact we get more applications every year and that participation continues to grow and develop is so heartening and wonderful to be a part of.”

At the ceremony, it was announced that the Jack Petchey Foundation, Panathlon’s longest-serving supporter, would be donating £123,465 to provide sporting opportunities for disabled young people in London and Essex in 2018/19, bringing its total donations to Panathlon to almost £1million over the last 14 years.