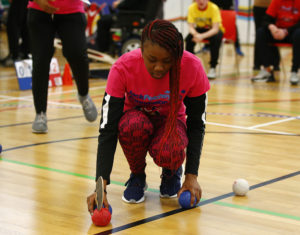 Competing in Panathlon competitions has given visually-impaired teenager Mercedes Jacdonmi a springboard to fulfil her potential as a sprinter – as well as match the trophy collections of her three older brothers!

The 17-year-old from Beckton, East London, is studying a B-Tec Business Level 3 at New Vic College in Newham, but while a pupil at St Angela’s Ursuline School she competed in so many Panathlon competitions that she has a cabinet full of medals and trophies.

Panathlon gives nearly 22,000 young people with disabilities and special needs every year the opportunity to take part in competitive sport that they are so often otherwise denied – and the Jack Petchey Foundation is one of our principal funders of activity in London and Essex.

It was at a Panathlon event that Mercedes’ talent for running was spotted by the man who was later to become her coach. She went on to become a member of the British Paralympic Visually Impaired squad and competes for Newham and Essex Beagles athletics club.

Last November, Mercedes was awarded Panathlon’s top individual honour in London and Essex – the Jack Petchey Outstanding Achievement award. It recognised not just her athletic prowess and hard work, but her tenacity, positive attitude and keenness to help others.

Having left school, Mercedes now wants to give back to the next generation of young people with disabilities and special needs, which is why she volunteered to be a Young Leader, most recently at the Panathlon East London Multisport Final at the University of East London’s Sportsdock arena. It means that, after five years as a competitor, the teenager’s journey with Panathlon has come ‘full circle’ by helping others fulfil their potential.

“I really enjoy teaching the children about the different games and encouraging them,” she said. “I found the experience really different as I’m so used to the Young Leaders telling me what to do! I loved it and enjoyed showing people that they shouldn’t be afraid to do their best.

“I have saved all of my Panathlon t-shirts since Year 7 and they’re all in a drawer. I knew from the start that one day I was going to have this pink leaders’ shirt! I’m going to keep adding more to my collection.”

Reflecting on her vast experience as a Panathlon competitor, Mercedes said: “When I first started Panathlon in Year 7 and I was really shy but I left in Year 11 and I’m really confident now, quite outspoken and open-minded.

“We have a family trophy case because my three brothers do basketball and football and I’ve got a whole shelf for my Panathlon medals – I’m so pleased I’ve got just as many as them!

“Panathlon lets you meet people from your Borough and understand other people’s perspectives, which is what I really like about it. I hope it goes on for many more years!”

It was aged eight that Mercedes was diagnosed with hydrocephalus – a condition which sees cerebrospinal fluid accumulate in the brain and causes increased pressure on the skull.

In Mercedes’ case, it caused damage to her optic nerve and her sight could not be restored. Her suddenly limited vision caused her many challenges and even crossing the road became a task fraught with danger.

Panathlon helped her rebuild her shattered confidence and fulfil her love of sport, providing a platform to pursue her passion for running. She represented Newham regularly in the Para Athletic Games, winning gold medals in the 100 metres and long jump, and in 2015 earned a place on the Talent Inspiration Programme, attending a three-day residential learning experience in Manchester.

Although her studies take priority a bit more these days, she still trains every week with the Beagles, takes part in parkruns and remains determined to beat her 100m PB of 13.87.

When she leaves college, Mercedes wants to go to Loughborough University and her ambition after that is to start her own inclusive gym catering for wheelchair users and people with visual and hearing impairments. “I’m going to get my business and sport qualifications so it’ll be a perfect project for me. Obviously I’ll take it one step at a time, but I can’t wait to get started!”