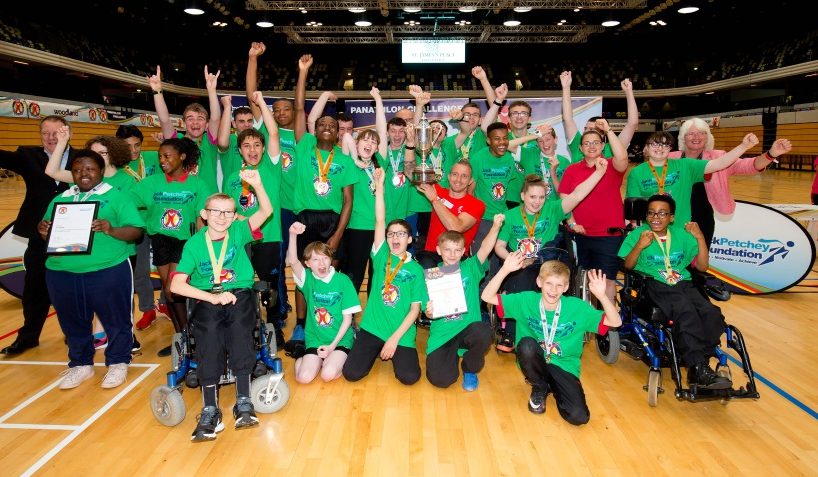 The London Finals are the culmination of another packed season of Panathlon competition, which has seen more than 1,500 disabled youngsters from 102 schools representing all 32 London boroughs compete in 16 qualifying competitions in the lead up to the Copper Box finale.

It was possibly the biggest day in Panathlon’s history, with a primary-age event in Gloucestershire, a swimming competition in Suffolk and a deaf athletics event in Merseyside in addition to our showpiece finale in London.

Luke Hammett – a teacher at Trinity School, who along with Eastbrook, Jo Richardson, Robert Clack, Dagenham Park and Sydney Russell Schools made up the Barking and Dagenham team at the Copper Box – commented: “That was very much tougher than last year. All the teams were very, very good. That’s what this is about: close competition with amazing skills on show from the kids. I just cannot stress what an amazing event this is.

“The kids get so much from this. This is their World Cup. It builds up confidence and social skills, and it’s the best event around. The build-up and togetherness as a team all bring out the best in them.”

Eastbrook School student Eddie Aviss, 12, added: “It means a lot to compete here because it’s really fun. Panathlon gives you so much enjoyment and it’s a place where you can meet other people and participate in sports, which is what I love. I love competing because the winner gets a trophy.”

Alex Chervnkvo, 12, said: “This means a lot because we all go to different schools and this brings us together as a team. It’s unbelievable to have won. It means so much; it’s so exciting.” 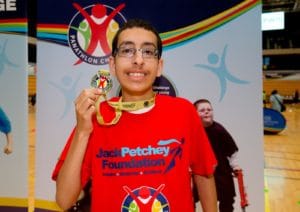 Tayla Sadik (pictured right), 15, of Westlea School in the second-placed Enfield team, boasts a proud record in the precision bean bag. He has won every match over two seasons, achieving the top score each year.

“It feels very, very good; it’s just amazing,” he said. “I can’t believe I’ve achieved it in a stunning place like this. It makes it so much more special. It’s the home of the Olympics.”

Lewisham (pictured above left) were winners of the Plate Final for the second-placed teams from each regional qualifier. They scored 54 points, beating Wandsworth (46), Islington (42) and Harrow (18).

A full set of results is available here.

The star of the Lewisham team was undoubtedly Abby-Jo Wawrzewski, who is currently in remission from anaplastic large cell lymphoma. She also has hyper-mobility of her leg joints and mild autism. The cancer has caused a variety of side effects which have affected her lungs and stamina.

“Before she was ill, she was our great hope for the London Youth Games; she played football, did swimming and athletics,” said her teacher at Brent Knoll School, Naomi Vann. “Then she was sick and couldn’t do anything apart from boccia, but she did not complain once and studied boccia tactics on YouTube. She’s now brilliant at it and is our team captain.”

Abby-Jo added: “It’s been a struggle, but I’ve got through it. Before I got cancer, I did football, any sport you can think of. I still do anything that I’m able to do, but it has affected my strength. I know my limits and sometimes I go over them, but I do it to get a medal. I just love Panathlon and can’t believe I’m here at the Copper Box.”

Before the competition, the traditional Oath was read by Jamie Brown, of St Giles’ School in Croydon. He admitted he was “very nervous”, but his teacher, Fiona Bell, added that he was “immensely proud to have been chosen” for the honour.

Young Leaders were provided by a large number of schools from across the South-East and further afield. One of them was Mark Harris, 17, from Glebe School in Bromley. “I love being a Young Leader and it’s been great to help these youngsters overcome their disabilities,” he said.

In attendance was Richard Chiassaro, (pictured below right) the European T54 sprint wheelchair champion, who is a strong medal hope for Great Britain in the World Para Athletics Championships taking place just across the Olympic Park in three weeks’ time. 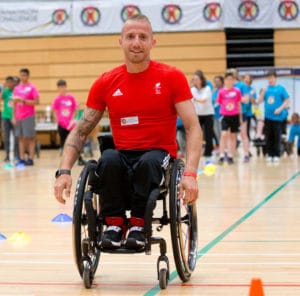 He said: “There’s a lot of potential among some of the youngsters I’ve seen and they’re having so much fun, which is the main thing. There was nothing like this for me when I was a kid. When I had a PE lesson, the kids went out on the field and I was left in the hall on my own, playing basketball. That’s why it’s a pleasure to support Panathlon, because it’s so important to give these young people opportunities. There could easily be the World Para athletes of tomorrow here, who started their journeys with Panathlon.”

Panathlon Ambassador Liz Johnson, the triple Paralympic medal-winning swimmer, said: “The Finals being at the Copper Box has made it very appealing to youngsters across all the London boroughs and they want to do really well in those early rounds and progress to this iconic venue. It’s really helped the Panathlon movement grow, because the carrot of competing at this venue is there from the start of the pathway.” 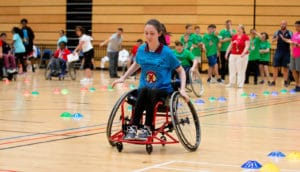 The day was attended by many of Panathlon’s much-valued funders, including the Jack Petchey Foundation, the Mayor of London, St. James’s Place Foundation, the Woodland Group and John Lewis Stratford City.

John Stubbings, Company Director of Woodland, said: “Over our seven years supporting Panathlon we have seen it grow so much and to see the smiles on the faces of the children at an event on this scale is utterly fantastic.”