Watched by Paralympian archer Mel Clarke, who presented the medals (pictured above), the Moreton-in-Marsh school edged out Hempstead Junior School, from Gloucester by a single point with their total of 63.

Mel, who won a silver at London 2012 and a bronze at Beijing in 2008 said: “Panathlon is brilliant for getting children of all levels involved in team sport.”

In joint third place on 55 points were Severnbanks (Lydney) and Chalford Hill (Stroud) – two more than Woodmancote (Cheltenham). They were followed by Cirencester Primary on 51, Gloucester Road (Gloucester) on 46, Widden, of  Gloucester (pictured above left) on 34 and Tibberton (Forest of Dean) on 33.

Blockley teaching assistant Claire Hurdiss said: “This gives our children a unique opportunity to compete as a team and take part in sport. They now play parachute, archery and table tennis at school. It is so fantastic they have won. ”

Blockley student Connor, aged 11, said: “I thought we were all very close as all the teams did very well. It was so lucky we won by the one point.” 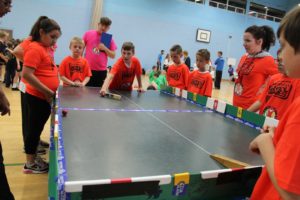 The Hempstead students had been looking forward to the Panathlon for months. “It is a brilliant event,” said teacher Tim Knibbs. “They all really benefit.”

For the Chalford Hill competitors it was a chance to be competitive. “The children love this and really excel on the day,” said teaching assistant Lucy Stevens.

Cirencester pupils (pictured above right) showed great enthusiasm, according to teaching assistant Carly Stevens, who said: “Some of the pupils who prefer to avoid sport throw themselves into competing at Panathlon because they are part of a team and support one another.”

Anona Greening, special education needs coordinator at Woodmancote, said Panathlon had a huge impact on her pupils. “This has really changed our pupils with regard to sport and is the highlight of their year,” she added.

At Severnbanks the 11-year-old children were keen to share their enthusiasm. Charlie said it was great fun and enjoyable, Bradley said the young leaders were a great help and Megan added: “When I heard we were going to the finals, I was really glad.” Kallie said she liked the activities and Jade said she loves playing the adapted games. 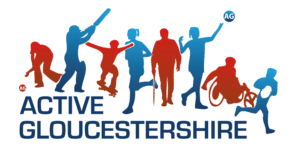