Buckinghamshire are celebrating double success at Stoke Mandeville Stadium, the birthplace of the Paralympic Games, where they have won back-to-back competitions in the Panathlon Challenge.

With British number one ranked wheelchair athlete Richard Chiassaro watching on, pupils from three Milton Keynes schools saw off competition from Northants, Oxfordshire and Wiltshire to become the first ever Panathlon Central Region champions. At the same time, High Wycombe’s Chiltern Gate School and Highworth Combined School finished first and second, respectively, in the Primary Panathlon event for five- to eight-year olds. A total of 140 disabled children from 17 schools across six counties took part in the day.

Lesley Byrne, co-ordinator of the combined team from Slated Row, Shenley Brook End and Portfields Schools, said: “It’s fantastic. It’s our first time in a regional final and we’ve won. Panathlon is great for our kids. There are so many different activities for them. They love to take part and they love the medals which, especially for special needs kids, is a really good motivation tool. They’ll be so excited on the bus home.”

The Bucks team started well, winning two of the day’s opening four events – table cricket and polybat. With a narrow lead over closest rivals Oxfordshire and Northants going into the athletics finale, the team won both the field events and relay races to secure an ultimately convincing victory and send everyone home in high spirits. 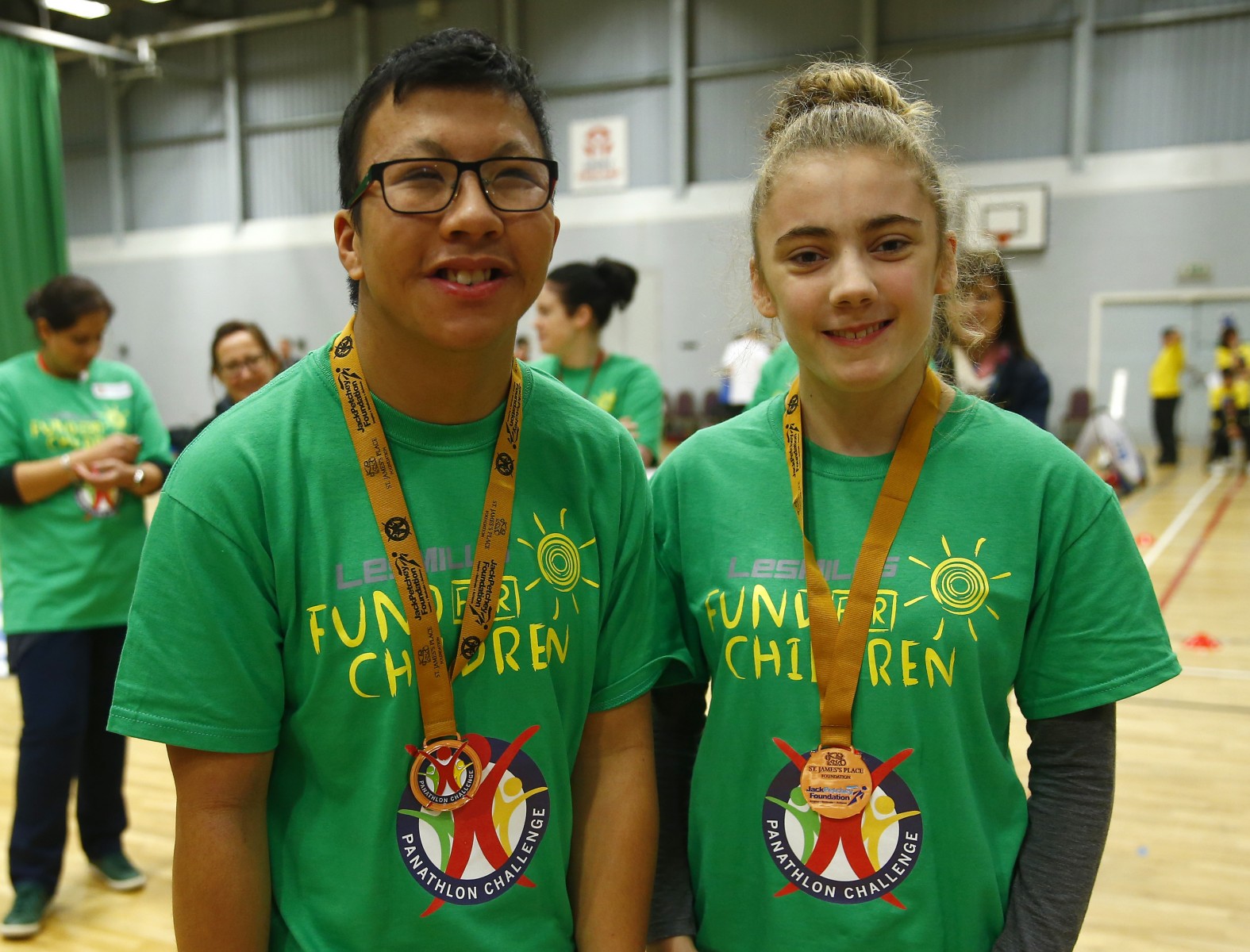 “It feels amazing,” said Shenley Brook End pupil Zahra Naqvi. “I didn’t think we were going to win, so I was really shocked. I’m really honoured to be here at Panathlon and to be representing Milton Keynes and Buckinghamshire. I’ll show my mum and dad my medal when I get home. They’ll be really proud.” In Bucks, 53 young people from eight schools took part in Panathlon in 2013/14, with 280 active hours of sport provided to disabled children.

13-year-old Zahra, who helped her team to victory in the table cricket and the athletics relay races, is a great example of how Panathlon provides opportunities for young people to get involved in sport.

“I’ve been coming to Panathlon for a few years now, but I was quite shocked when I was first picked,” said Zahra, who has spina bifida. “I always thought that I wasn’t the sporty kind and wouldn’t be good at sport, but I kept being selected and, as I’ve got older, I’ve realised that I’m quite good at it and I’ve really enjoyed it. It’s great to know that sport is available for everyone.”

To top off a fantastic day, Zahra even got to go race against the fastest athlete in the UK and Rio 2016 medal hopeful Richard Chiassaro, who joined in the self-propelled manual wheelchair race.

“I knew he went slow on us because I know how fast he is, but it was a real honour to meet him. I’m really glad I’ve met somebody with the same condition as me. We’ve both got spina bifida, so I can relate to him and I’m really glad that we had a chat. He’s a big inspiration, so I think I might take up racing!” 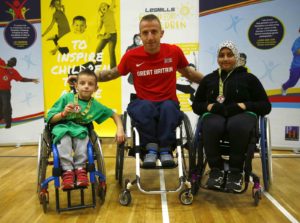 Panathlon ambassador Richard Chiassaro said: “It’s been a brilliant day. These regional finals have been at such a high standard, with county winners all coming together to compete at the next level up. It’s great to see everyone getting the chance to compete on a level playing field and the kids have all loved it. The atmosphere has been terrific.”

The 12-strong team from Milton Keynes, which featured children with a range of physical impairments and learning difficulties, won July’s Buckinghamshire Panathlon Final to give them the opportunity to progress to the inaugural Central Region final – the third in a new series of ‘best of the best’ Panathlon regional finals that raises the standard for all participants.

The new events have been made possible thanks to the support of funders, including the Peter Harrison Foundation and Les Mills UK, the fitness company whose investment will go towards ensuring another 200 young disabled people receive additional sporting opportunities this year, while the Primary Panathlon was supported by the Shanly Foundation, who fund charitable causes primarily within the Home Counties.

Keith Burnet, CEO of Les Mills UK, said: “It’s been a wonderful day. It’s great to come and actually see how the money is helping. You can’t describe the joy on the faces of the kids today. They get so much out of it: fun, competition, working as a team and seeing what they can achieve. We set up the Les Mills Fund for Children to support and enable charities like Panathlon to enhance the lives of children. Everyone should have the opportunity to get the many physical and mental benefits that participating in sport brings. We’re very proud to support Panathlon in providing that opportunity to so many children.” 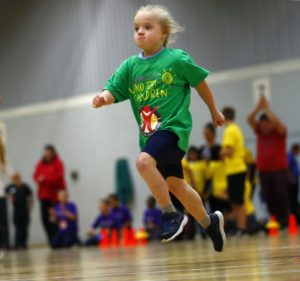 Annie Sturgeon was delighted to take a team of pupils from Highworth Combined School, who have a range of hearing impairments and learning difficulties, to their first Primary Panathlon, which builds foundation skills in a range of Panathlon sports for five- to eight-year olds, providing them with an introduction to sport.

“We’ve had a fantastic time,” she said. “It’s great for all the kids to come along and get a chance to participate. We’re a mainstream school so these kids would normally get very little opportunity to play for their school teams, so Panathlon is great for their self-esteem and confidence.” 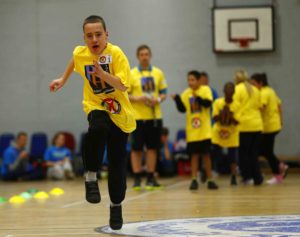 “For schools to come together like this is great, added Welch. “You don’t get that luxury very often. Social skills are some of the most important things we try and teach them at our school so to see them interact, celebrate when they win and shake hands at the end is spot on.

“We’ve been here once before and it was great to be invited back, but we changed the students that we’ve bought because it’s so inclusive. We’ve got kids with physical disabilities, some in wheelchairs, autistic children and kids with learning difficulties. It’s a very inclusive event, which is exactly what we’re looking for.”

Billing Brook pupil Kieran Randall enjoyed the step up in competition, even though his table cricket team found it hard going against some tough opposition. “It’s been good, but we’ve played some hard teams,” he said. “It’s like the Champions League. You’re playing the best teams.”

“For us it’s all about inclusion and it’s about every child being able to take part, so events like Panathlon where there are lots of other children involved, whatever level they are working at, is brilliant. 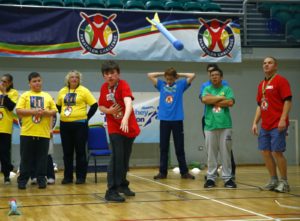 “Most of the sports here are new to our children, but we are definitely going to take them back to school and try them with other classes, as you can see how they would work for a lot of our children. We can then have inter-class competitions. You can definitely see the potential for schools in our area.”

“The most important thing here is that the children get to participate in a competitive event which has rules that you have to play within, but offers the opportunity to be successful no matter how good you are at it,” said Paul Searle, co-ordinator of the Wiltshire team.

Paul has been involved in Panathlon since it first came to Wiltshire five years ago and is continuing to help it grow throughout the county, “One boy today playing against us at new age kurling today struggled walking around and getting down on his knees to play, but as soon as he got down into the playing position it all changed. For a few seconds, the concentration was incredible, everything was under control and he threw a perfect-weight shot. It was wonderful to see!”

Big thanks also to our Young Leaders from Sir Herbert Leon Academy in Milton Keynes.
A Full set of results from the Regional Final here –

A big thank you must go to the 9 Young Leaders from King Alfreds Academy who helped officiate the various activities on the day. They showed great enthusiasm throughout and managed each of their activities perfectly.