The event was split into two heats for London schools and another for schools in the South-East, with points added up from both heats to decide an overall winner. The South-East schools proved dominant, with all three teams on the podium coming from their heat.

Priory, from Suffolk, finished with 87 points, ahead of silver medallists The Ashley School, from Lowestoft, and Addington, from Wokingham in Berkshire.

West Lea, from Enfield were winners of the London heat, ahead of Redbridge’s St John’s School and Queensmill, of Hammersmith and Fulham.

The sight of Tom Daley practising in the pool – just two months before he jets off to the Olympics in Rio – was an inspirational start to the day before the competition began.

When the races started, Priory’s dominance was soon apparent, with wins in the 2x25m relay, both one-width freestyle races, the treasure hunt and the raft races.

Priory pupil Jade Horsfall, 16, said: “It has been amazing. This is a once-in-a-lifetime opportunity. Coming here to this huge place makes you feel nervous at first, but once you do it and get to the finish line, it makes you feel so proud of what you’ve done.”

Melissa Fletcher, 16, also a student at Priory, added: “Watching Tom Daley before was just awesome. I love Panathlon because when I get frustrated or angry, it makes me feel free just to run or swim and forget everything else.”

Jane Chave, PE Teacher at Priory, reflected: “We are just absolutely delighted to have won. We left school at 8am this morning and have brought a coachload of supporters with us. The students are totally and utterly shattered, but exhilarated.

“In our area we don’t get the opportunity to meet or compete against other schools, so this has been wonderful.

“Panathlon balance it out by awarding points to students who have greater disabilities, so it makes it a completely level playing field. Other than this, boccia is the only other thing we compete on with equal status.

“It just takes your breath away to walk into a venue like this and you can see that inspirational feeling reflected in the children’s faces.”

Second-placed Ashley’s swimming teacher, Neil Godbold, reflected: “We had a three and a half hour journey coming here this morning, but it’s been absolutely worth it. Some professional swimmers don’t get the chance to swim here, so for our children with special needs to come here and compete is brilliant.

“It really boosts their self-esteem. When they’re in normal school events, they trail in at the back, but they can come here and excel because everybody’s equal.”

Ashley pupil Riley Kane, 11, added: “My favourite things about today were the races, the medals and the freedom. I felt fresh, healthy and free in the pool. The ball race was my favourite.”

Mel Pengrave, Head of PE at third-placed Addington, commented:.”It’s been a wonderful experience for our students and supporters to come to such an amazing venue, which promotes all the Olympic values which we promote at school.

“They’d been looking forward to it since we qualified back in May and it certainly didn’t disappoint. Our team spirit was just magnificent to witness.”

Freddy Leech, 14, from London champions West Lea School, said: “This place is really fantastic. I swam so fast I was like a machine! When I finish I just feel so confident, happy and proud.”

Oz Oztan, teaching assistant at West Lea highlighted the life skills his pupils gained from participating. He said: “Sitting down, queueing up, listening to instructions and performing in front of other people, these are vital things they can take away. Panathlon events give our kids opportunities they just do not get otherwise.”

Panathlon ambassador Liz Johnson, the triple Paralympic breaststroke medallist, was on hand throughout the day, marshalling the event and awarding medals.

She commented: “It’s great to be back in this venue and it certainly gives the pupils the ‘wow factor!’. It can be intimidating due its vast size, but today all the teams completely embraced it and were surrounding the poolside cheering on their team-mates in every event.

“I really enjoyed my role today, which meant I got to spend a lot more time interacting with the children during the competition, and it’s great to see how excited they get.”

Our aquatic young leaders today (pictured below right) did a tremendous job were from Great Baddow School in Essex, who have performed a similar role (in and out of the water) on many occassions before and are now definitely part of the Panathlon team! Thanks to them once again. 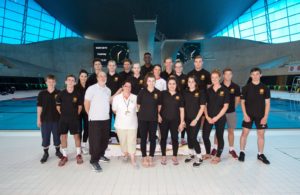 Panathlon CEO Ashley Iceton added: “It has been another terrific competition here at the Aquatic Centre after our debut event here last year. Many qualification competitions happen throughout the south east of England during year thanks to our various generous funders. We also can’t host the pinnacle of our competitions here in the Olympic Park without the help and support of the John Lewis Foundation and Wembley National Stadium Trust, whose help has been so valuable over the last few years.”

Gallery of pics if you click on the first image 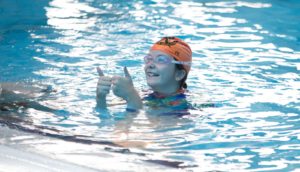