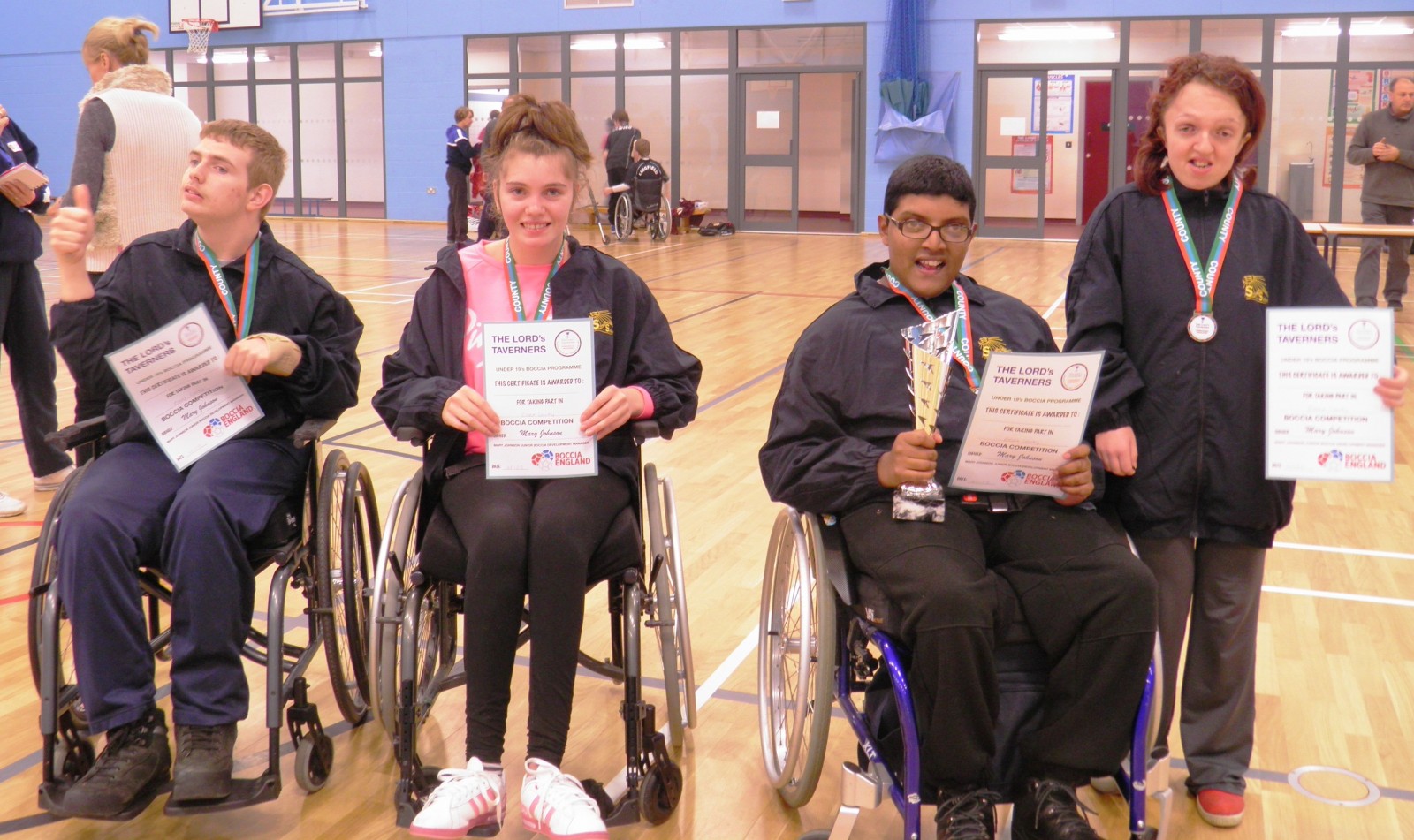 The Lord Taverners competition is the first of 5 competitions which Panathlon are delivering on behalf of Boccia England, which is part of the National Competition structure. On duty were 16 Young Leaders trained up as Boccia officials by Panathlon from St John Payne and Columbus School.

8 teams took part from 6 different schools around Essex with the winning team qualifying for the next regional round in Hertfordshire in 2014. Sadly 3 other schools couldn’t make it on the day due to staff illness and transport problems.

In previous years Davenant and Southview had provided strong teams and it was this tradition that continued, however this time the clash came in the semi -finals of the competition.
This year Stanway Lancaster and Columbus competed for the first time.

The pool stages saw Beacon Hill recovering from inspired Davenant play to finish second in their pool  and newcomers Stanway finishing top of their pool.  Southview ‘A’ qualified after the head to head result against their ‘B’ team but this could have been so different as the ‘B’s ‘ were leading the ‘A’s’ after two ends in their match.

In the Final against Stanway, Southview scored consistently in each End to emerge as deserved victors.

Davenant just managed to snatch third place after a great effort from Beacon Hill, who were ahead after three Ends -and only with the last delivery of the fourth End did Davenant claim the Bronze.

The officials commented on the high skill level and the spirit that the competition was played in and two Boccia Leaders from St John Payne, Joe and Courtney, were selected to accompany Southview through to the Regional Finals in Hertfordshire in early 2014

Southview have taken part in Panathlon for 5 years and are always strong in Boccia within our multi-sport competition, so its no surprise that they defeated all comers today. Well done to you all!

Thank you to the Leaders from St John Payne who were fantastic and Columbus and AET for letting us access their facilities. Thanks also to Mary from Boccia England who was present on the day to award medals and trophies to the winners, and certificates to all.

As for our Boccia Young Officials Course, Panathlon trained 15 students from John Fisher School in Croydon. These Leaders, who learnt how to play, officiate and lead boccia effectively, will now help in the Lord Taverners South London Boccia Competition on the 21st November.

Mike Davies, Teacher at John Fisher School said, “We really appreciate Panathlon coming in to deliver this session as it will give these boys an understanding of a Paralympic sport they hadn’t seen before. At the competition next week, they’ll have an opportunity to work with disabled students which they don’t do very often and I expect to see them rise to the challenge”

For other information on Boccia in Panathlon – please see here.