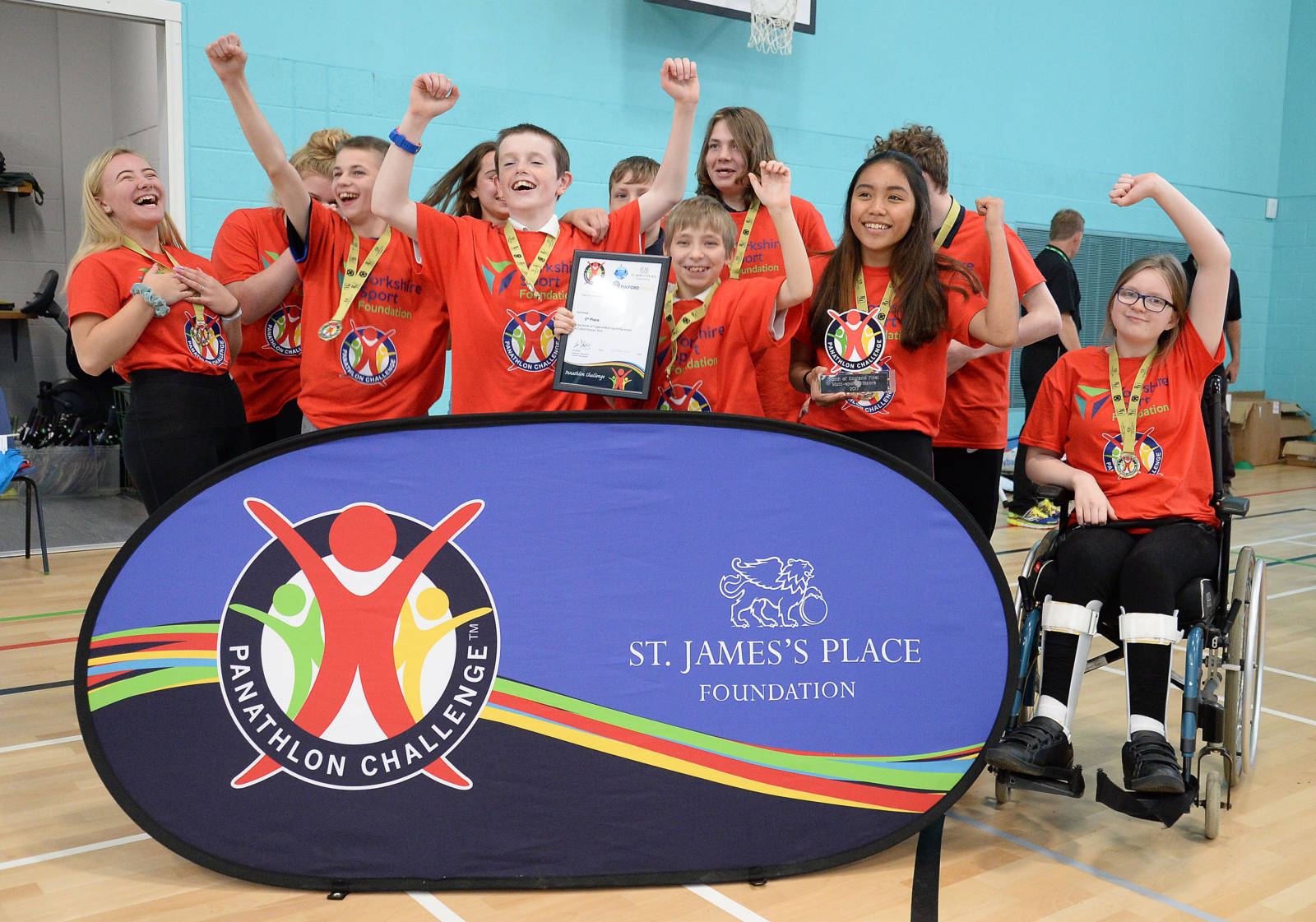 The Calderdale team, who played in red, was made up of pupils from Brighouse High School and Brooksbank School. They were delighted with their win, which was also cheered enthusiastically by members of the other teams during the presentation ceremony.

Di Kirby, PE Instructor from Brighouse High School, said: “It’s just amazing to see the youngsters having so much fun. Many of them don’t get the chance to compete in a mainstream school and so this is fantastic.

“We’re a competitive bunch so we were very keen to be Northern Champions again. Just look at everyone’s faces – you can see how proud they are!”

Brooksbank pupil Liam Calder, 12, said: “It’s brilliant to win – it’s been two times now and I want to win next year, too. I hope I’ll be running again because that’s my favourite part.”

Brighouse High student Bea Badilla, 13, added: “I didn’t think we were going to win because the other sides were really good. But everyone wanted to come first again and we did our best.”

York, represented by North Yorkshire regional winners Joseph Rowntree School in York, played in green and were supported by many parents and family members as the local team.

Adrian Willis, watching grandson Rhys Willis, 12, compete, said: “There’s so much camaraderie between the teams. It’s particularly great to see them shaking hands after each event, and congratulating each other.”

Rhys’s dad Owen Willis added: “Rhys really struggles to socialise in school, so to see him so relaxed and enjoying himself here is great. We’ve been to quite a few Panathlon events now and they’re very well run. Everyone has smiles on their faces; they obviously enjoy it.”

York came a close second but Team Leader Barry Cornforth said the day was as much about “team-building, socialising, improving communication skills, self-esteem and confidence,” as it was about the result.

He added: “We have 13 students here, from Years 7 to 11. If they’re not competing they’re on the sidelines supporting each other, which is great to see.”

Joseph Rowntree pupil Cohen Martin, 11, was competing in his first Panathlon and said: “I can’t wait to go back and tell my friends about it!”

He added: “I was really nervous this morning because I thought it was going to be hard. But we won all three games of New Age Kurling and I did the longest standing long jump. I want to come again next time!”

The Newcastle Falcons team, playing in yellow, was made up of pupils from Sir Charles Parsons School and Percy Hedley School.

Helen Jackson, Head of PE at Percy Hedley School, said: “It’s nice to be able to team up with another North East school – for both the pupils and the staff. This competition is brilliant because the pupils can compete in a variety of sports. They might not get the chance – or the choice – at school.”

Richard Brown, 14, of Sir Charles Parsons School, said: “I’m really proud to be representing my area. Table cricket is my favourite sport, especially the bowling, because I get people out.”

Fellow pupil Dean Clayton, 13, added: “We’re all friends together at Panathlon. When people fail, even from other teams, I tell them to get more power and they’ll do better.”

Gateshead were represented by Cedars Academy who worked twice as hard to represent the region after their partner school, Gibside, had to withdraw on the morning of the event.

Steve Middlemiss, Cedars’ Community Sport Development Officer, said: “Our team’s been looking forward to this all week! They really enjoy the social aspect of it, as well as taking part in so many different activities under one roof.”

Reald Lazale-Harbottle was an excellent captain of the team. He said: “My job is to encourage everyone and reassure them. They might be nervous at first but it’s always alright when they get going. It’s the taking part and the mixing with other people that’s important.”

The event was presided over by 22 Year 10 GCSE PE students from event hosts Fulford School. James Shutt, Head of PE, said: “I had twice as many students who wanted to take part.

“It’s a great experience for them to connect with kids with disabilities – they get as much out of it as those competing. They’ve had a fabulous time and, as well as being a useful life experience, it’s valuable leadership experience which will help in their university and job applications.”

Student leaders Izzie Mills and Ben Plevey, both 14, said they had really enjoyed officiating the event. “I didn’t expect to get on so well with the people taking part,” added Izzie. Ben said: “It was good watching the smiles on everyone’s faces, especially when they won!”

Calderdale’s Billie Lambert, of Brighouse School, was ceremonially presented with a Yorkshire Children of Courage award during the Panathlon presentations. She originally received the Yorkshire Child of Courage Sporting Achievement prize at the event sponsored by St. James’s Place, in Leeds on Friday night.

Billie, 14, defied a visual impairment to establish herself among athletes at local running club the Halifax Harriers, who initially had no idea of her disability. She also competes at national level in Freestyle, Street, Contemporary and Rock and Roll dance competitions.

She said: “I’m quite embarrassed by things like this but it makes me very proud, too.”

A full gallery of photos from the day is available here.