Calderdale today qualified for the Panathlon Yorkshire regional final next April by retaining their West Yorkshire title at the Richard Dunn Sports Centre in Bradford.

Their team from Brighouse High School and Brooksbank Sports College were crowned county champions again, after beating children from Bradford, Kirklees and Leeds.

A guest side from Wakefield – made up of children from Kettlethorpe High School – also competed in the six sports categories, but were not part of the championship, as they were being introduced to the Panathlon concept for the first time.

Calderdale School Games organiser Colin Crowther commented: “We’re all ecstatic! This day has a real buzz about it and to come first is really nice. But to win two years in a row is amazing.

“The kids all have massive grins on their faces and they’ll be so proud when their medals are formally presented to them in front of the school in tomorrow’s assemblies.” 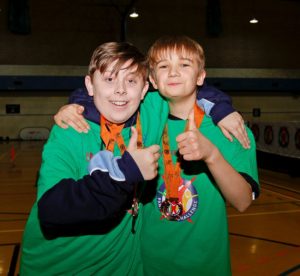 One of those Calderdale children beaming with pride was 13-year-old Aaron, who goes to Brooksbank Sports College. He was sporting medals for bean bag throw, long jump, curling and table cricket.

“The teamwork was the best part of today,” he said. “We all worked so hard to do our best and now we’ve done it!”

Panathlon events organiser Howard Nicholls said: “We had lots of children engaged who performed very well. The competition was played in a fantastic spirit. Our thanks go to West Yorkshire Sport for sponsoring the event.”

Inspired by visiting a Panathlon North Yorkshire pilot, West Yorkshire Sport decided that their own severely disabled children could reap the same benefits and so decided to host their first ever Panathlon as part of the West Yorkshire Sainsbury’s School Games.

That event took place in March this year. The date for the second West Yorkshire final was brought forward so that a Primary Panathlon can be fitted into the 2015/16 schools games programme in June.

“We would like to maintain the enthusiasm for Panathlon in West Yorkshire and are looking forward to planning for 2016, Many thanks to West Yorkshire Sport for helping to co-ordinate everything.” Howard added.

“Everybody now understands what it is all about and so the preparation has been much better, which resulted in better competition.”

Leaders for the event were provided by Kirkburton Middle School in Kirklees and West Leeds Academy.

Panathlon COO Tony Waymouth commented: “They did a fantastic job, having previously been trained by Panathlon in November in preparation for the event. They were supported by three staff from Irwin Mitchell, who had also officiated in the previous March Panathlon event, mentoring some of the youngest leaders on the boccia section of the event.”