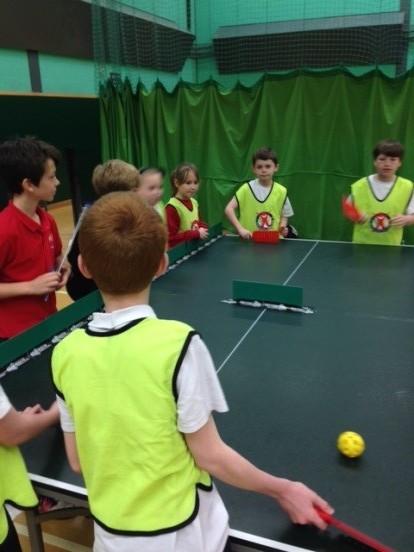 Panathlon recently delivered a Primary Panathlon in Cirencester for 62 students from 8 schools in the surrounding area. The 9 teams competing had the chance to take part in 9 different Primary Panathlon activities including Paralympic sports such as boccia. For the majority of these students, this was the first time they had played any disability sport and further, represented their school at a competition.

With an extremely high level of competition throughout the day, the eventual winners were Blockley School after impressive displays in Table Cricket and Flight Path. The silver medal was awarded to Cirencester Primary with a close third place going to St Davids Primary School.

A huge thank you must go to the Year 9 Leaders from Kings Hill and Sir William Romneys who showed excellent enthusiasm throughout the day and helped build the children’s confidence in each of the activities.

Blockley School will now attend the Primary Panathlon Gloucester Final in June where they will once again have the chance to put their skills in to action and compete on behalf of their school- something they have never done before!

“I wanted to email to say what a fantastic event the Panathlon was today. Our children loved it – “best day ever!” And what amazing medals! All our children achieved and didn’t stop smiling all day. We really hope you repeat it next year.” – Sue Dearsley, Teacher at Chesterton School

“I brought one student along today who is based in a mainstream school. It was lovely to see him chatting with his new team mates through playing these sports and it was great that they felt as though they were in a real competition environment.” – Mrs Venn, Leighterton School

“A lot of my children mentioned they had never before taken part in inter-school sport. Today has given them that chance, and it’s been amazing to see students working together, trying new sports. Specifically, I had one student who struggled with confidence, but today he has interacted with his peers and hasn’t stopped smiling. Thank you for a great day.” – Mrs Bond, Stratton School.