As part of qualifying programme for Regional Finals, the Cambridgeshire Multi-sport Championship play-off took place on the 15th November. (Pictured left) The top 2 Cambridgeshire teams, Granta and Huntingdon battled it out to decide who would represent Cambridgeshire in the Regional East England Final next year. The Granta team regained the right to go for the East title, defeating Huntingdon across 6 sports, to reverse last year’s result.

Again St Ivo students were excellent Young Leaders at the competition and again showed why they were invited to London Finals to officiate at the Copper Box Arena within the Queen Elizabeth Olympic Park. 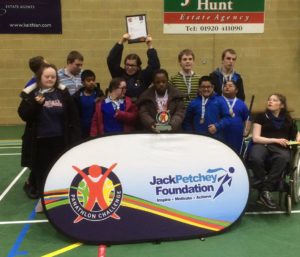 On Wednesday 17th November, pupils from across the county took part in a Panathlon Challenge at Wodson Park Sports Centre, Ware. Six SLD/PI Schools attended with 45 young disabled students competiting and officiated by 20 leaders from Pinewood and Richard Hale Schools.

Anne Marie Riddle, Project Ability lead said, “It was a very successful event again and again the Panathlon has hit it mark in the county”

The event saw a combined team from Amwell View School (Stanstead Abbotts) and Breakspeare School (Abbotts Langley) pictured right, were victorious and earn the right to represent Hertfordshire in the East England Finals.

Also on the 17 Nov, Marlborough College hosted the Wiltshire Panathlon Challenge for the fifth time. This year the event was led by a selected group of 12 pupils from the College, who also complete their outreach activity with Brimble Hill School in Swindon.

With 44 children attending the event, competition was fierce with the combined team of Uplands and Brimble Hill of Swindon securing a close victory over another combined team of Fairfield Farm and Larkrise. 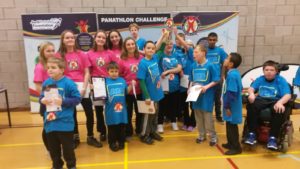 The winning team and leaders from Marlborough College (pictured below) have now been invited to Regional final at Stoke Mandeville Stadium on Tuesday 28th February.