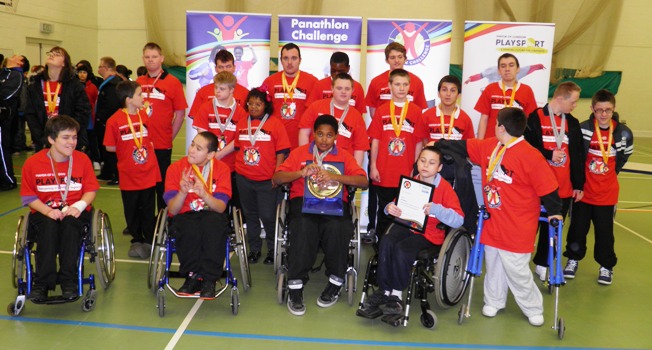 In a really close contest in the first round of the 2011 Panathlon Challenge competition, held at the John Fisher School in Sutton on Monday 7 February, the team from Croydon recorded a narrow triumph over their neighbours from Bromley. Both teams go through to the South London final on 17 March, so Bromley have an opportunity to go one better next time. Croydon, however, have pedigree in this event, being previous all London finalists.

Only 6 points separated them at the end of a full day of competitive sport, each event seeing neck and neck rivalry between the top two teams.

Sutton finished 3rd with a very creditable 42 points. Merton were last with 32 points but have another crack at the title on March 17th at Crystal Palace National Sports Centre..

30 London boroughs will participate over the next 8 weeks to determine who goes ahead to the 5 area finals in March. At the end of the area finals, 5 teams will emerge to compete for the ultimate prize in June; the London Panathlon Challenge Champions 2011.

The Mayor of London, through his Sports Legacy Fund, is supporting Panathlon with £86,000 in 2011 and the same amount next year. This means that in the three years in the lead up to the 2012 Olympics and Paralympics, he will have invested £255,000 in developing grass roots disability sport in London, through Panathlon. Boris Johnson said, ‘ The Panathlon Challenge is a fantastic competition. It is about taking part, aspiration and achievement, three of the best motivators for young people.”

The Panathlon Challenge is now in its tenth successful year of delivering sporting opportunities and “mini-paralympic” type competitions for young disabled Londoners. Around 100 athletes aged between 8 and 18, (30 to 35 each from the boroughs involved), will compete against each other in the sports of Boccia, New Age Kurling, Polybat, Football, Table Cricket and Athletics

Trudy Kilcullen , Chief Operations Officer for The Jack Petchey Foundation, which is investing £50,000 in Panathlon in London and Essex in 2011, said. “ We believe that all young people should have the opportunity to achieve their potential. Panathlon is the only organisation that enables young disabled people to participate fully in competitive sports designed to suit their needs. We fully support their work and look forward to seeing even more disabled young people becoming coaches and sports leaders in the future