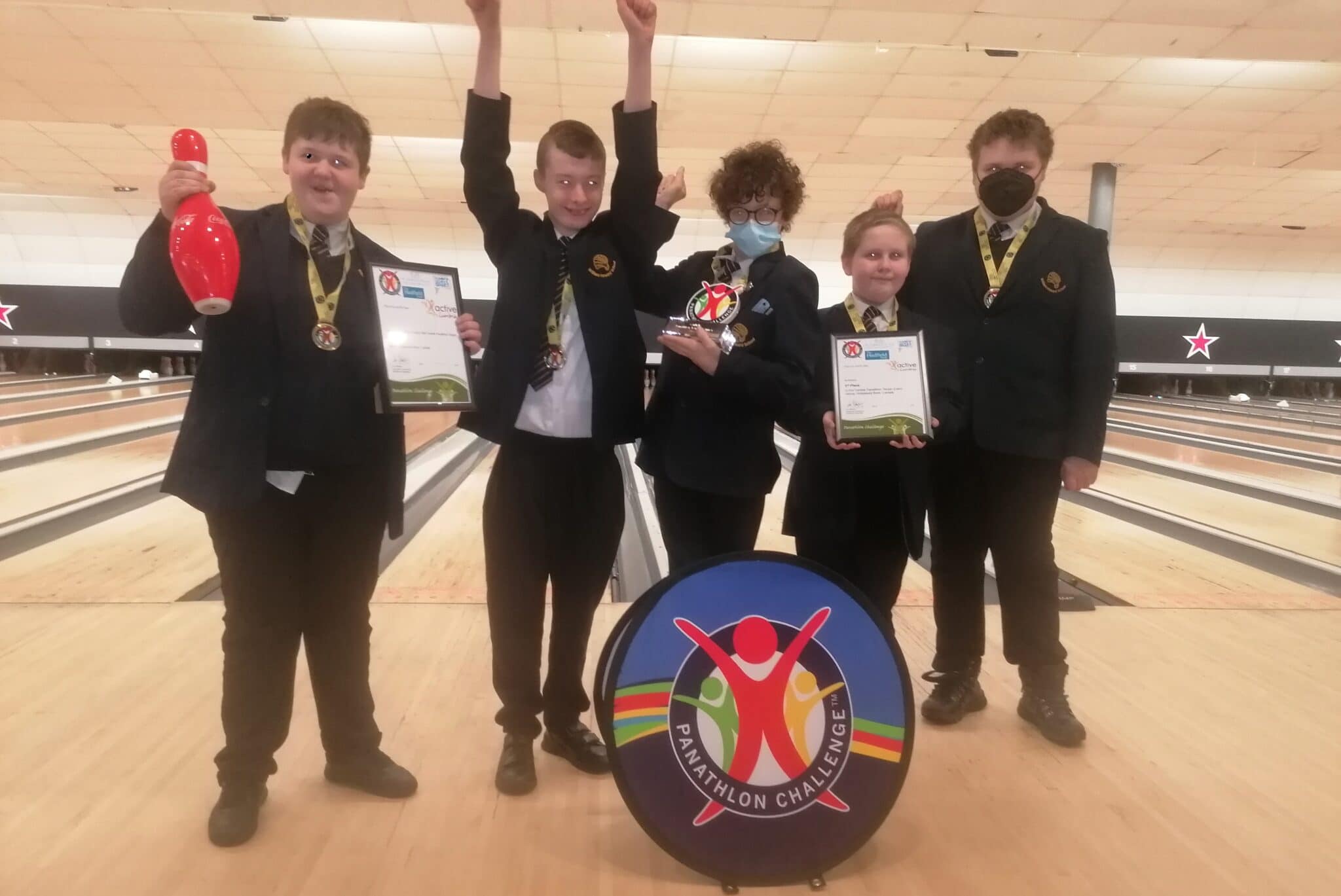 Children with disabilities and special needs in Cumbria are revelling in opportunities to take part in competitive sport thanks to Panathlon’s burgeoning calendar of events across the county.

Panathlon’s growth in Cumbria started just before the pandemic with an event in Kendal for schools in the southern Lakes area, then our Virtual Programme allowed other parts of the county to get a taste for what we provide. Now, with Covid restrictions eased, a programme of external events is set to be rolled out county-wide.

An Xtend competition in Carlisle in March will form part of a calendar of Xtend and Primary multisport events which will serve as qualifiers for County Finals in Penrith in May, run in partnership with Active Cumbria.

On Tuesday (February 8), six secondary schools convened at Hollywood Bowl in Carlisle for a ten-pin bowling competition which for many pupils was their first trip out of school since before the pandemic two years ago.

Coming a day after a Panathlon primary multisport event in Barrow in Furness, the bowling event featured four schools who had never done Panathlon and two who had dipped their toe in before, and now can’t wait to plunge in and reap the full benefits of our rapidly expanding local provision.

William Howard School had previously attended a Panathlon boccia competition in Liverpool, but were making their competitive Panathlon debut in their home county. In March, the school will play host to an Xtend multisport competition for Carlisle schools in March.

Their Learning Support Assistant Tracey Croucher said: “Before Covid hit I had heard a lot about Panathlon, then during lockdown everything else seemed to stop and they were the only ones trying to keep things going. It’s fantastic to have something that can now get children out of school. Coming here today I can see this is going to be really big and something we’d like to be part of.”

Tracey has run inclusive sport clubs at William Howard School for the last 15 years, including boccia and table cricket. “Panathlon now gives me the opportunity to try and take things further than what I could provide on my own, which I’m really delighted about,” she said.

“The children have been having a fantastic time today – you can tell by the smiles on their faces. The way they are working together is amazing as they often find that difficult. We never normally see them like this. It’s so enjoyable as staff to be here with them.

“This provides an environment where they feel they can achieve and be successful and they don’t often get that elsewhere in life. It’s a massive opportunity to excel in something, have fun, gain independence, self-esteem and responsibility.

“I can’t wait to get more involved with Panathlon as time goes on. The staff who supported this trip have already booked their spots for the next one and I don’t need to ask the students whether they would come again because it is so obvious that they would.”

William Howard won gold medals at the ten-pin bowling competition and volume of their cheers could be heard across the Lake District! “The kids were over the moon!” said Tracey. “They couldn’t believe they had won. Two of our students did not let go of their medals for the rest of the day. They were all so proud to show their parents after club tonight when they picked them up at school. What a difference things like this can make to students.”

Netherhall School from Maryport threw themselves into Virtual Panathlon at the height of the pandemic , but relished their first chance of face-to-face competition with other schools at Hollywood Bowl.

“We did Panathlon bowling and cricket in school which were really rewarding for the children but they have really missed coming out,” said Marianne O’Hea from Netherhall. “They don’t get much chance to represent their school but Panathlon gives them that and it’s really valuable.”

Cumbria Academy for Autism also participated in our virtual activity and trained a group of Young Leaders to officiate and guide their primary-age pupils in Panathlon competitions.

Teacher Jo Hedley explained the benefits of their older students competing in their first external event: “Our secondary pupils are very physically able but they sometimes become overwhelmed when there is a competitive element. If it’s overly competitive the chance of them going into ‘crisis’ is quite high. I think Panathlon strikes the right balance.

“I always think it’s worth bringing them because they have to become resilient and this is a way of developing that. Avoiding these situations isn’t going to change it.”

She added: “This really helps in terms of their willingness to engage in other events. We’ve just done an Ultimate Warrior in school and we noticed that more pupils will interact with it whereas they wouldn’t have before. Having this kind of exposure is great because they can then build confidence and progress to more things. We’re now really looking forward to the Panathlon multisport event at William Howard School next month.”

Panathlon’s Chief Operating Officer, Tony Waymouth, said: “The pandemic has afforded us time to grow our network in Cumbria and create local events and pathway finals. We cannot wait to give young people opportunities that have not been afforded to them over the past two years.”

Panathlon would like to thank Active Cumbria and The Hadfield Trust for supporting our work this academic year across the county.

Virtual Panathlon has reached all corners of the country with schools hundreds of miles apart singing its praises for keeping students active and engaged during lockdown.

The Lord’s Taveners regional Boccia qualifiers, saw 24 teams and 98 competitors representing their counties, in order to progress to the national finals. The competition was split into two classifications,…