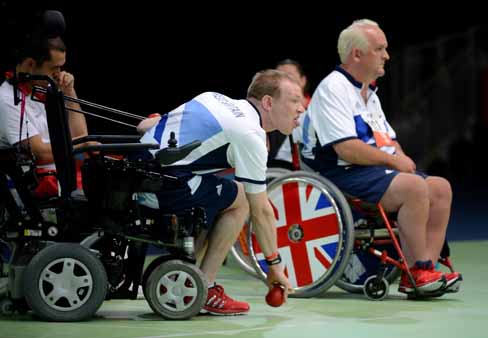 Dan Bentley who has visited Panathlon several times in the last 6 months won a Bronze medal at the Paralympics yesterday !

The Games will be captain Nigel Murray’s last and Dan Bentley said: “ He has gone out on a high. I wanted a medal for myself but partly to send him off on a high note. The team were excellent. We have done it many times before but to do it today was excellent.”

Dan (pictured above in yesterdays match) has visited Panathlon on three occasions in the last year, watching the Panathlon players play Boccia and giving a “masterclass” on how Paralympians play the game at the highest level.

Its great to see a friend of Panathlon who has encouraged some of our youngest players  how to play Boccia, succeed at the highest possible level.

Panathlon wish to congratulate Dan and his family on this tremendous achievement.