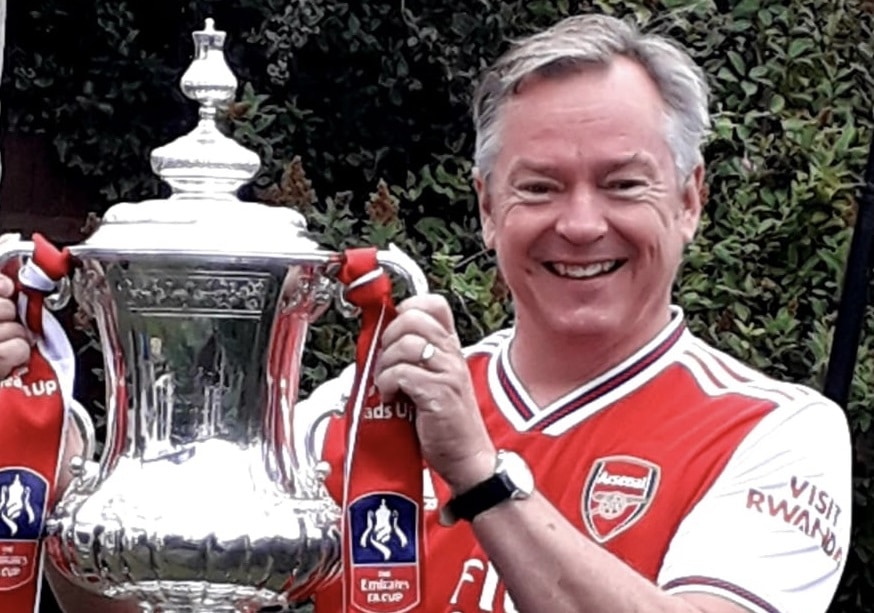 Dave Seager’s new book, Arsenal for Everyone: Embracing Diversity & Equality, has a special connection with Panathlon and a former Panathlon competitor in particular.

As the title suggests, Dave is a fanatical Arsenal fan and this is his fourth book about his beloved Gunners – but the first since the death of his son and Arsenal soul mate. Having found his own relationship with his club changed by his loss, he wanted to highlight the stories of those who, through no fault of their own, have found the support of their team framed differently.

That quest led to him encountering fellow Gooner and Panathlon ambassador Alex Brooker, star of Channel 4’s The Last Leg, as well as ex-Panathlon competitor turned coach, Tom Clements, whose story is told in the book’s opening chapter.

Tom was named after Michael Thomas (scorer of Arsenal’s unforgettable title-winning goal at Anfield in 1989, for the uninitiated) and was born with cerebral palsy. His disability hasn’t inhibited his passion for sport and football in particular.

Whilst a pupil at Marjorie McClure School in Bromley, he competed in his first Panathlon in 2006, was soon made captain and led his team to the South London title at Crystal Palace. “When I was younger I couldn’t wait for the Panathlon events, they were the highlight of my year,” he said. “I loved competing against other students and being part of a team with other schools.

“Panathlon has given me the confidence to go on and do so much. It holds a place in my heart and I love sharing my experience and knowledge with the children I now coach. My teacher Guy Wilkins was an inspiration to me and I hope I can be the same to my students.”

Guy recently retired after 30 years at Marjorie McClure and Thomas, now 32, has stepped into his considerable shoes by becoming a member of the PE staff, having earned his spurs (if he’ll forgive use of such a word) as a highly qualified coach in several sports. He was the first ever disabled candidate to pass the FA Level 2 coaching qualification.

Thomas’ amazing journey from disabled athlete to coach has Panathlon at its root and had the support and mentorship of his former teacher Guy Wilkins all the way through. He’s now treading his own path as a coach and teacher back at his old school. His story –and his passion for Arsenal – is beautifully told by Dave in his book.

Thomas tells him: “When I am coaching the kids, sometimes it does not feel like it can really be me. I am so privileged to be giving something back. It is simply an honour. I believed in myself to do it, but to make it a reality is another thing. I am so lucky.”

From every sale of Arsenal for Everyone, £1 will be donated to Panathlon. The book’s launch was featured in the matchday programme for the 1-0 win over Watford on 6 November and Dave will be signing copies accompanied by two Gunners legends in the Armoury shop after the home match vs Newcastle on 27 November. There will be a further event at The Tollington before the Southampton game on 11 December.

You can order your copy of Arsenal for Everyone: Embracing Diversity & Equality here.