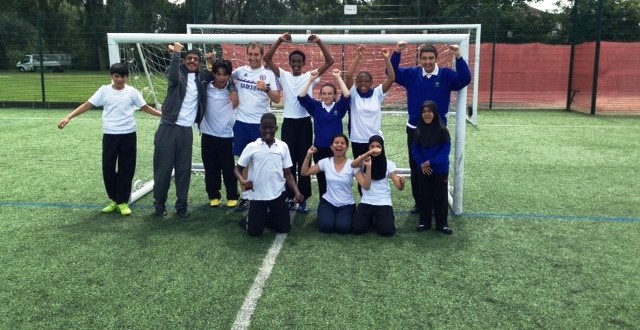 Panathlon teamed up with Southfields Academy in Wandsworth and Chelsea Football Club to deliver a football day for deaf and visually impaired students, on the 27th June.

With the morning having a focus on training and skills, the 30 students in attendance had the opportunity to learn skills from 3 Chelsea FC coaches. After honing their dribbling skills and ball control, both the primary students from Kingsbury Green and secondary students from Southfields, Oak Lodge and Linden Lodge came together for a penalty shoot out. The orange team who took on the “Netherlands” name badge, combined from players from each school were the eventual winners netting 18 goals for their team.

After the lunch break, students took to the pitch again but this time to take part in real matches, refereed by the Chelsea Coaches.

“I had a brilliant day. I scored a hat trick for my team and even though I support Manchester United, it was so good to have coaches from Chelsea because they are really good at football.” Zane, Student at Kingsbury Green School.

“Today has been a great day- we’ve got these students mixing between schools and communicating with each other through playing football. The students are all really happy because they’ve got Panathlon medals to go home with and hopefully we can do more of this again next year”. Nick Miller, Southfields Academy.

Thanks to the Jack Petchey Foundation for funding this work