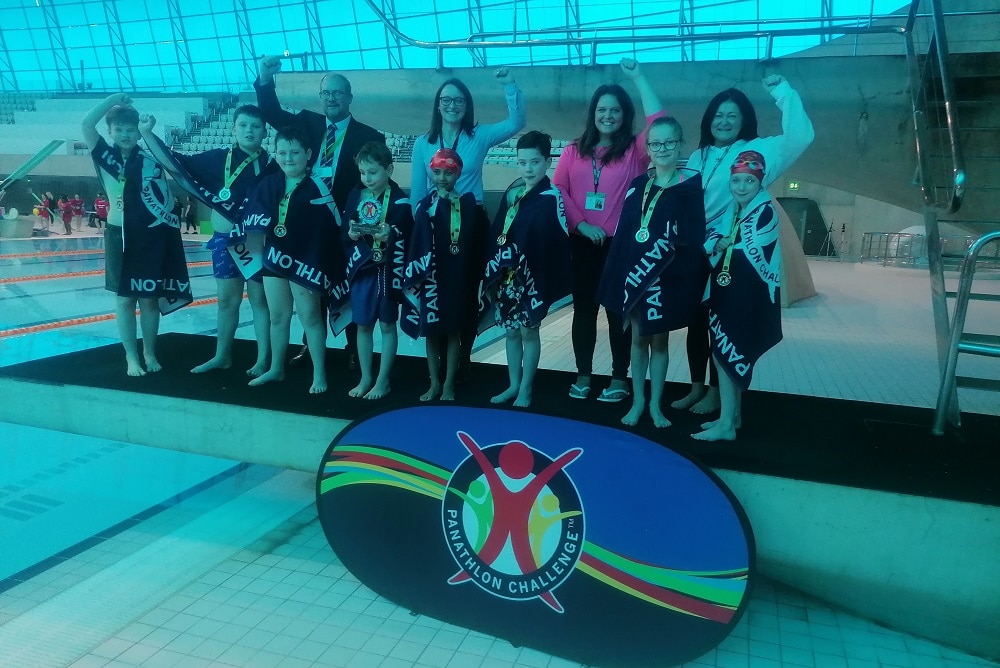 Our Discovery galas feature skills challenges (rather than races) which suit pupils who lack skills and confidence in the water, either because they have never experienced swimming or their skills have lapsed over the pandemic.

The Discovery format was introduced to address the decline in swimming participation since Covid, with the draining of school pools, time, expense and the inability to secure lesson time in the dwindling number of local authority facilities all causing participation to nosedive.

Swim England have warned that most primary school children will be unable to swim a 25m length by 2025. Further research shows 84% of schools identified a decline in children’s physical fitness since the lockdowns and two-thirds thought pupils had gained excessive weight.

“Today has been absolutely outstanding,” said Claire Moore, Assistant Head Teacher at Oakview Primary School in Loughton. “To see what the children have achieved today and the risks they have been able to take is quite remarkable. I can’t say enough about this organisation and what you have offered us.

“For our pupils being able to take risks, while being supported in doing so, is really important because it gives them a real sense of achievement. They have been given a platform to take those risks today and they will carry this feeling forward into other parts of their lives.

“For children with additional needs, they just need the right tools and the right support, then they will show you they can achieve at most things. They always surprise you.”

Pupils with SEND at Oakview have not had the opportunity to take part in an external sporting event for several years due to Covid restrictions. For some, it was their first ever experience of going underwater.

“It’s lovely to see these children being given the opportunity to receive education beyond the classroom,” said Claire. “They were initially a bit anxious and unsure, but next time after today they will have that confidence.

“The benefits aren’t something you can easily measure, but they are massive, let me tell you. This may have been their first time doing a Panathlon swim event today, but it certainly won’t be the last!”

Eight-year-old Oakview pupil Holly hadn’t been swimming for almost three years. She called the day “brilliant” and when asked to rate it out of 10, replied “a billion!”

“This has been really valuable,” said Head Teacher Amy Wareham, whose pupils (pictured below) used to receive one term of swimming per class, but that stopped last March due to Covid. Many pupils hadn’t swum at all for two years and others had never swum outside of school.

Amy added: “I know some of them were wanting to swim but just didn’t have the confidence in themselves to take that next step. Hopefully this will inspire them to do it. Today will show them that if they can do this, they can go on to achieve other things.

“Today will a reference point for us as staff to say, ‘Remember when you swum at the Olympic pool and it was hard? You did that, so what else can you do?’ It’s a great platform for even more achievements in the future.

“After all, swimming is a life skill. It’s just as important as teaching them how to cross the road.”

Amy said the ‘Discovery’ gala format met the needs and abilities of her pupils perfectly. “Experiences like this are magnificent for them as an introduction to water skills and the concept of competing,” she said.

St John’s RC SEN School in Woodford Green came fourth in the competition and were delighted at the opportunity to take part in their first ever Panathlon and the first external sports event post-Covid. Their pupils had higher levels of need and one girl had never been in a swimming pool before.

“Just getting in the water is a huge achievement for her and she will always be able to say her first experience was in the Olympic swimming pool!” said teacher Sarah Rose.

“This is the first time for two years we’ve been able to get on the bus, leave the borough and represent our school. It has been lovely for them to experience this opportunity because for the last few years they have missed out on so much.

“Our children are more at risk with Covid for health reasons but ironically they also need to experience socialising more, so today has been brilliant for them. It has been really nice watching them gain confidence in the water.”

Sarah admitted that any concerns and preconceptions about bringing her pupils to the event had been settled immediately. “We were worried that many of our children couldn’t swim and have challenging and unpredictable behaviour. I thought they might find today overwhelming, but that wasn’t the case at all. There is no pressure at all, there were clear explanations, it was organised brilliantly and they have had a fantastic experience.”

Ellie Davis, teacher at third-placed Alderton Juniors, called the day “a unique experience for our pupils who wouldn’t necessarily get picked for other sporting events.” She added: “Many of the children haven’t been swimming for years so it’s such a great experience for them. The activities were perfectly pitched.”

The competition’s Young Leaders from Davenant Foundation School in Loughton were simply magnificent, using mature social skills and friendly encouragement to get pupils to give their best at the challenges.

“They are really loving giving the children the confidence to do it that they maybe wouldn’t have had at the start of the day,” said PE teacher and swim specialist Lisa Wogan. “Some of them are quite quiet but once they get in the water with the children it brings out the best in them. They don’t even realise sometimes that they have got that skill.”

Tony Waymouth, Panathlon’s Chief Operating Officer, said: “We have spent several months helping schools prepare for this experience through Zoom calls and phone conversations with teachers. We have done our utmost to help put swimming back on schools’ ‘to-do’ lists and give children experiences in the water after such a long period where they have been denied such vital opportunities.”

The re-introduction of Panathlon’s external swimming galas has been warmly welcomed by schools who are seeking to address issues of increasing concern for their pupils during the pandemic.

Panathlon is re-launching its external swimming programme with new and improved galas across the country which we hope will help rejuvenate the sport.