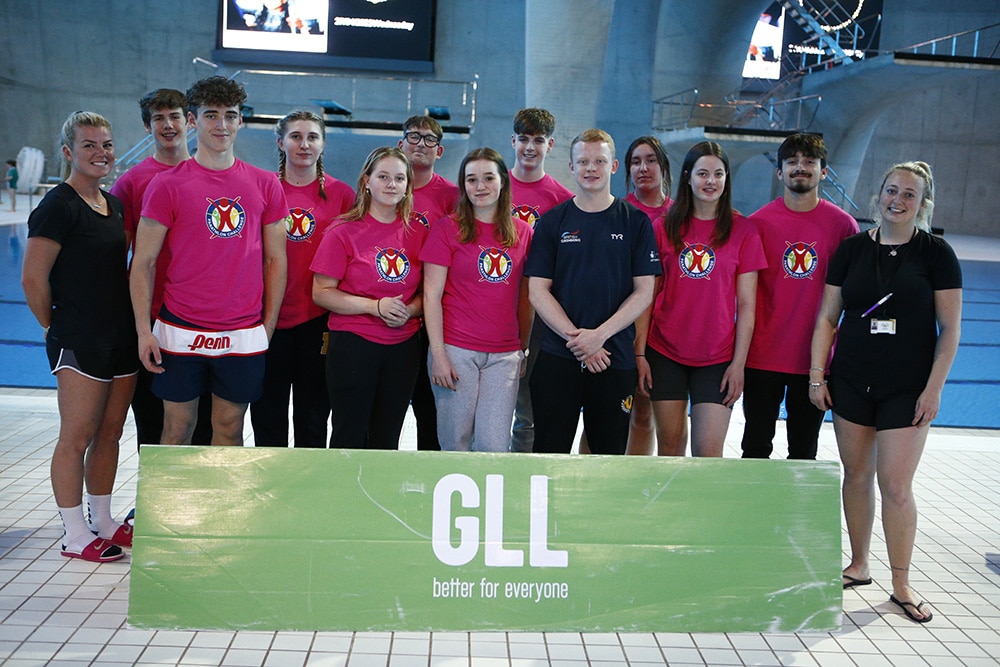 Panathlon was the springboard for a lucky group of sixth-formers to get an amazing opportunity to train with the Great Britain diving team at the London 2012 Aquatics Centre.

Russ has arranged for Sally’s BTEC Sport students at Great Baddow to have a once-in-a-lifetime coaching session with the GB athletes and their coach at the Aquatics Centre as part of their studies.

Nineteen-year-old Tyler (above) is from Southend in Essex. He is currently training ahead of representing England at this summer’s Commonwealth Games in Birmingham. He trained with the rest of the squad just before Panathlon’s Primary Deaf Gala at the Aquatics Centre on Wednesday April 27, where Great Baddow pupils were Young Leaders guiding pupils and officiating the competition.

“I’m looking forward to coaching these guys,” said Tyler. “It will be good fun and a great opportunity for them. Who knows, perhaps it could lead to them going on to have diving lessons themselves.”

Tyler was a strong swimmer as a child before he tried the diving board aged eight. Eleven years on, diving is his full-time job and he has 10 training sessions per week as part of his elite programme.

“We have a great team here and we motivate each other,” he says. “Mentally and physically it is tough but I can feel myself improving every day.”

Sally said: “To train with elite athletes is such a brilliant opportunity for our students. If we hadn’t come to this venue with Panathlon it would never have happened. It has definitely opened doors for us, not just in terms of giving my students unique experiences but for networking too.”

Being a Young Leader at Panathlon events is now part of the BTEC course structure for sixth form pupils at Great Baddow, forming part of the Level 3 qualification’s leadership element alongside physiology, health, nutrition, anatomy, fitness training and coaching.

Sally added: “The experience of volunteering at Panathlons is invaluable because they get to work close-up with children with a whole range of disabilities. It opens them up to a new world. It’s brilliant for their confidence and widens their skill sets.”

Tony Waymouth, Panathlon’s Chief Operating Officer, said: “This is a great example of the opportunities that can develop organically through consistent engagement with our programmes.

“Great Baddow’s Young Leaders now have the opportunity of a lifetime thanks to accessing the Aquatics Centre via our competitions and meeting the fantastic GLL Partnership Manager Russ Barnes. We also thank the Jack Petchey Foundation for their ongoing support of our Young Leaders programme in London and Essex.”