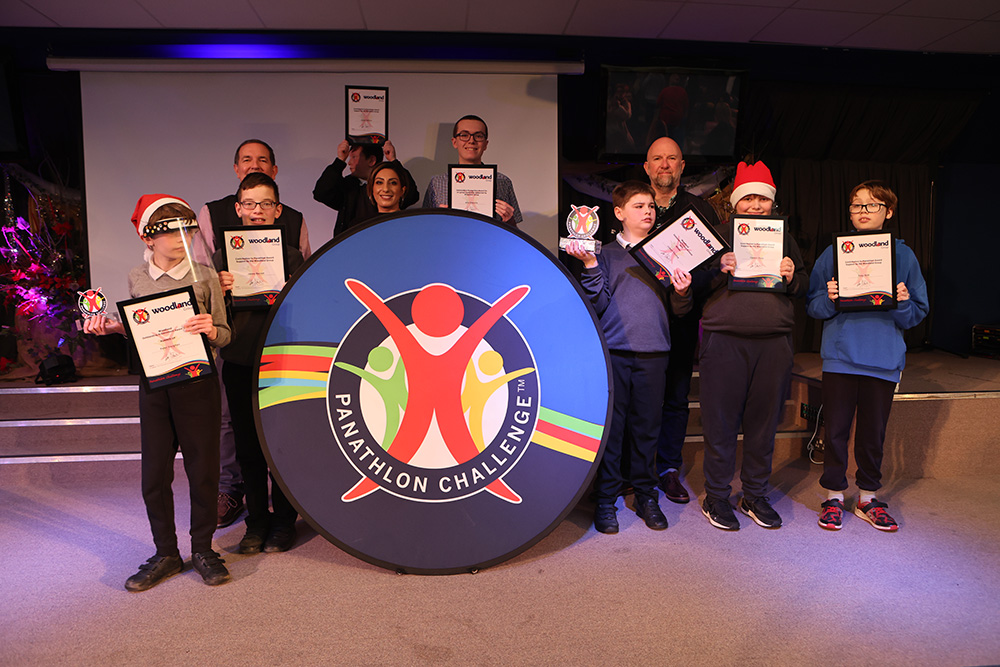 Some of Doucecroft School’s finest achievers were rewarded for their endeavours by Panathlon’s long-term supporters Woodland Group in Colchester on December 20.

In a special presentation, Woodland Group’s John Stubbings, Jac Randhawa and Chris Harvey gave awards to pupils from the school in Colchester who had shown resilience to achieve in PE and Panathlon competitions despite their unique challenges and adversity.

Alfie Glanville is a familiar face to Panathlon competitors in Essex. Previously an award-winning competitor, he has now developed into a leader who encourages and organises his younger peers at Panathlon’s swimming galas, 10-pin bowling and multisport events. He was given the award for Ongoing Leadership.

“Going to competitions reminds me of when I started as a competitor in Panathlons when I wasn’t all that confident,” he said. “Now I can help the younger kids. It makes me feel brilliant and pleased for them. I’m a good instructor and good at cheering them on.”

We also presented internal Doucecroft awards, supported by Woodland Group, to recognise some of the pupils’ progress through PE and Panathlon competitions:

James Barrett, 12 (a previous winner of a Woodland Group Essex Outstanding Achievement Award) used to need one-to-one support in PE, but has revelled in sporting opportunities to such an extent that he now competes all over the country in trampolining and attends practice three times a week. He also plays for a football club.

He said: “I love Panathlon so much. When I get a medal it makes me really happy. I wouldn’t come on any trips before, but now I love it. It’s all because I tried it. It’s given me confidence and resilience.”

Jack Carpenter, 16, is the most improved pupil for PE in Doucecroft’s transition hub. He initially refused to take part in PE in or out of school, but now “pushes and challenges himself” and loved his first ever Panathlon swimming event in London.

Billy Grainger, 10, was thrilled to win a Panathlon 10-pin bowling gold medal recently. “He came home so happy, with such a sense of achievement and showed off his medal to all his siblings,” said his mum Kayleigh. “It’s these things that build their confidence and self-esteem which they so often miss out on in mainstream school.”

Jacob Halford, 10, won his very first competitive swimming race in the Panathlon at the London 2012 Aquatics Centre and takes time to support younger pupils in his team. His mum Jo said: “Doucecroft and Panathlon have given him the chance to do things he was never able to do before in mainstream school. He is so much more active and involved.”

Vinny Latham, 13, said simply: “Panathlon is a funner version of PE!” He added: “I do it every single time I get the chance. All my medals are at home hanging on my cupboard.”

His mum added: “He didn’t used to do anything to do with sport; he wouldn’t go near it. The difference in him is absolutely amazing. The fact he’s now competing as part of the Panathlon team is incredible.”

Conor Fenn, 13, is another previous Outstanding Achiver award winner who struggles with the noisy sports environment at times, but supports new pupils at Panathlons and reassures them how much fun they will have!

George Lieu, 13, said he “loved using energy” in PE and at Panathlon events. He added: “When I look at my medals it makes me happy.”

Matthew Hawkins and Noah Heaps (left), 12, have both just begun engaging in PE and have taken part in in-school Panathlon-based activity. In the new year, they will prepare to make their debuts in an external Panathlon competition.

Kai Giles, 11, is a new pupil at Doucecroft and competed in his first Panathlon swimming event in London in the autumn term. “He has shown great resilience in PE,” says Andrea. “He can’t wait for the next Panathlon event and constantly asks me when it is!”

His stepdad Kieran Pearce added: “He loves everything about Panathlon. His self-esteem was really low before coming to Doucecroft. He now believes in himself and wants to try more things inside and out of school. The difference it’s made to him is massive. It’s made him a much happier person.”

Toby Stiff, 10, who spent three years out of school before he came to Doucecroft, now “loves PE”. His mum Kaye said: “Sport has a big impact on how he’s feeling. He even comes up with ideas for games, whereas previous he didn’t participate at all.”