All the teams had competed already earlier in the year and had qualified in either the Champions top half of the draw, or the Plate competition for the runners up from the first round. The winners of each competition today would qualify for their London Finals to be held at the Copper Box Arena within the Queen Elizabeth Olympic Park in June.

In the Champions competition, previous London Winners Newham and Barking & Dagenham are always strong rivals and they were joined by the strong Team of Hackney and the new finalists, Waltham Forest. The competition was very close with Hackney winning the Table Cricket competition, Waltham Forest winning Polybat and Newham being triumphant in Field Athletics, but Barking & Dagenham were strong overall, winning Boccia, Kurling and the Athletics races. This gave them the overall win with 50 points, clear of Newham in 2nd with 42. This results sees the Barking & Dagenham team triumphant and qualifying for the all London Final within the Olympic Park on June 18. Well done to all competitors!

Luke Hammatt a teacher from Trinity School, part of the Barking & Dagenham Team said, “Panathlon is the most engaging competition in the country – the experience for the students is amazing.”

A big thank you must go to our young Panathlon Officials from St Bons and Royal Docks School who did remarkably well. Thanks also go to UEL for supporting the event and supplying us with some additional students to help too! 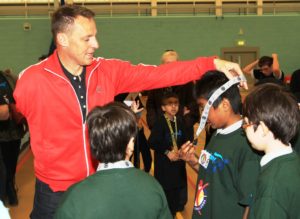 The full results can be seen here

In the Plate Final the teams competing were Havering, Islington, Redbridge and Tower Hamlets.

This competition was fiercely fought but the result was never in doubt, with the Team from Redbridge, almost completing a clean sweep, winning 5 sports and coming 2nd in the 6th to win comfortably with 58 points, from Havering in 2nd on 44, Islington came 3rd on 38 points and Tower Hamlets in 4th on 28pts. Therefore Redbridge will join Merton and Brent in the Plate Final at the Olympic Park in June.

Thanks must also go to the Jack Petchey Foundation for their support.