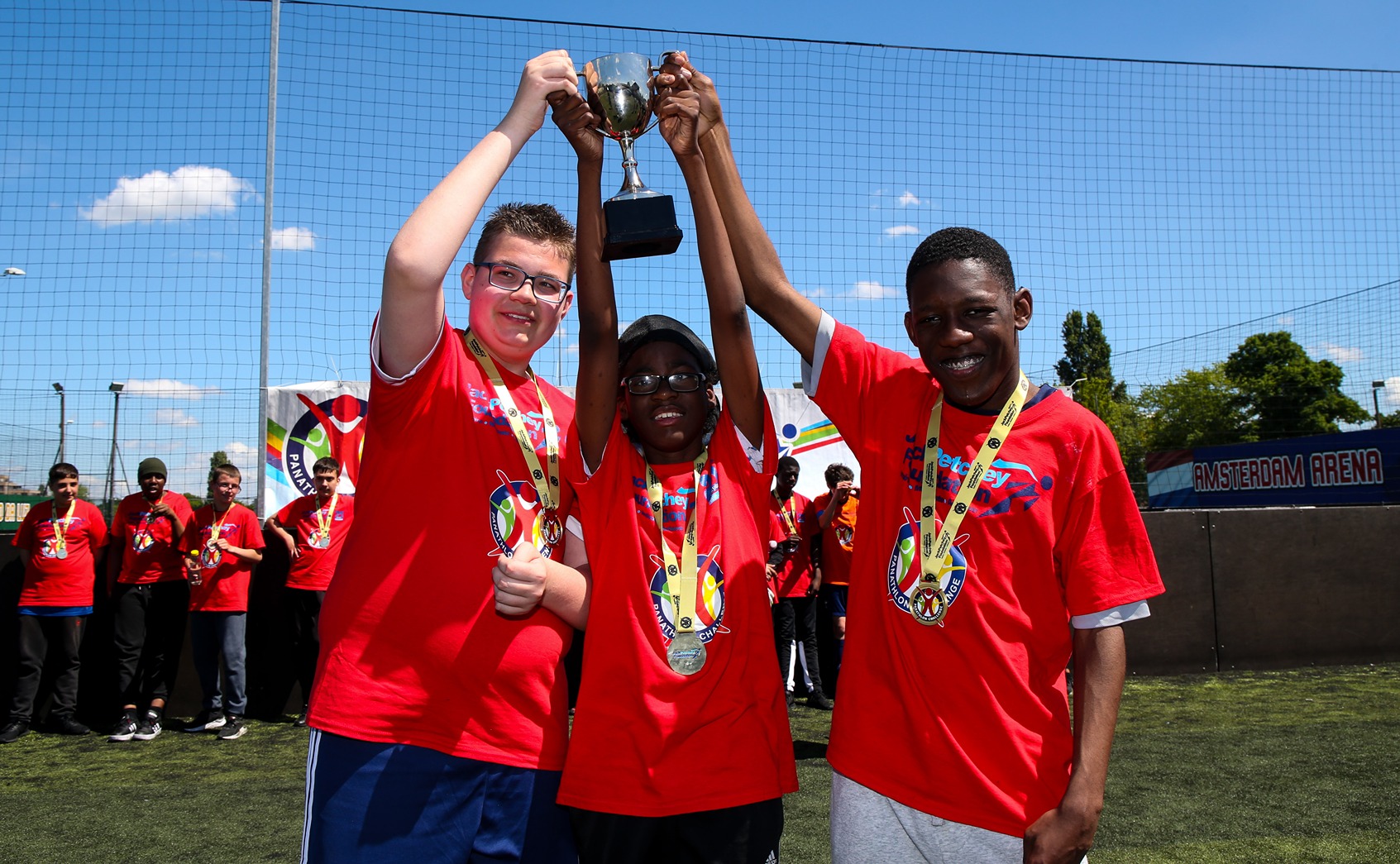 The return of Panathlon London’s Football programme was hailed as “absolutely huge” for pupils after the combined West Lea and Oaktree School team from Enfield were crowned our 2021/22 champions.

Ten teams gathered at Wembley Goals on Thursday (May 19th) for the grand final of the year-long competition, which is supported by the Jack Petchey Foundation. The tournament encompassed four regional qualifiers, a ‘Higher Ability’ final (for teams who fall just short of London Youth Games standard), a Plate Final for first-round runners-up and skills coaching. In total, 562 pupils had taken part before a further 70 contested the final.

The combined Enfield team won both the Under-13 and Under-16 categories for a convincing overall victory ahead of Riverside School (Haringey) and Stormont House (Hackney).

It was clear staff and pupils were delighted with the post-Covid return of Panathlon’s aspirational pathway, with local winners qualifying for what was a highly competitive regional final.

Michael Warburton, PE teacher from gold medal winners West Lea, said: “Seeing our pupils come up against kids with similar needs from other boroughs has been really rewarding. It has brought the best out of them. All we’ve heard all week is, ‘We’re going to Wembley!’

“These pupils know they are representing the Borough of Enfield, not just the school. That puts pressure and a sense of responsibility on them to be well behaved. Together we’ve come up with examples of the behaviours they should show: cheer each other on, show good teamwork and be quiet when we’re meant to be.”

West Lea have been involved in Panathlon for many years and Mr Warburton revealed the team had been practising for several weeks in the lead-up to the London Final.

“Sport-wise, there isn’t much for special needs kids to partake in outside of school, so events like this give them the confidence to compete against one another and develops their social skills in a bigger environment. That’s where the impact has come.”

“In life in general, not just sport, we’ve always made it clear to our kids that the more you practise and the more determined you are, the better the result will be. They definitely learn those lessons through Panathlon.

“I remember coming here pre-Covid when we won the tournament and for three months afterwards one of the kids was still carrying his medal around in his pocket. It gives these kids such a lift. It’s great to be back doing events again.”

West Lea pupil Meshat, 13, said: “I’ve done assists, passing, nutmegging and I’m playing football in the sunshine! It’s my second time being here and I just love it!” Beside him was strike partner Laith, who said: “My favourite bit was getting a hat-trick! This is my first time representing the school and it makes me happy.”

Fourth-placed Langdon School from Newham have competed in Panathlon for over 15 years and have hosted numerous regional qualifying events.

PE teacher Darrell King said: “Over the years we’ve had many volunteers help us prepare and compete. A lot of it is done on goodwill, but anyone who has been to a Panathlon event and seen the smiles on the kids’ faces is always more than willing to give up their time because they know how much it means to them.

“Panathlon’s impact really became clear to me during the lockdown. The impact of it not being there was huge. We really felt the absence. Everybody talks about all the dangers out there in the world, so nobody mixes, but Panathlon brings everybody together. The progression through the qualifying rounds is a really rewarding system for them. I don’t think you can put a price on that.

“A lot of students feel like having special educational needs is a negative thing, but Panathlon helps put that positive spin on it. They see people like themselves. They’re representing Newham and their school and nobody can take their medals and certificates away. It’s amazing for them. I guarantee you as soon as I see them back at school tomorrow, they’ll ask me when the next one is!”

Robin Barrick, Assistant Head and Head of PE at fifth-placed Bensham Manor (and Chair of the Surrey Special Schools Sports Association) was equally fulsome in his praise for the event.

“There is pressure in schools to catch up on maths and English post-Covid, particularly at older levels, but that has come at the expense of wellbeing. Things like Panathlon are really important in that regard and fortunately our Head has been very supportive of us getting back out to events.

“That balance of attainment and wellbeing is even more important with SEND children because the pandemic was particularly hard for them to understand. A lot of them did literally nothing in physical terms during the lockdowns. We’ve got many large, low-income families with limited resources so to be able to give their children an opportunity like this is amazing. I was concerned about the travelling distance from south London but it has absolutely been worth it.”

Robin Elliott from second-placed Riverside School said: “Our team knows to even make it this far was an achievement. This is an unbelievable opportunity to compete at what is quite a high level for them. It gives them a place where they can use their abilities. They get so much out of it and it will stand them in good stead for other areas of life.”

Bronze medal winners Stormont House enjoy “the real sense of pride” that emanates from their teams’ Panathlon achievements, according to supervisor Alf White. He added: “They all love the sense of achievement and positivity in assembly and around the school.”

Special guest at Wembley Goals was Pritam Varsani from our sponsors BlueBay Asset Management. He confessed to being “blown away” by his debut experience of a Panathlon competition.

“Seeing first-hand the smiles on the kids’ faces has been fantastic,” he said. “It feels like they are all in it together. Even if someone has less ability than the next child, they all worked as a team. I genuinely have great appreciation for what I’ve seen today.”

Long-time Panathlon Trustee Dan Thompson also joined in the fun. “There is something life-affirming about these events,” he said. “Post-pandemic, to see this many kids back out there playing football and enjoying themselves in a good competitive spirit is fantastic. I would urge anyone to come along and see a Panathlon event in person. It’s extraordinary to see the impact on young people.”

Panathlon’s London Football programme built towards its climax at Wembley on May 19 with two recent events – a ‘Higher Ability’ Finals and a Plate Final for schools knocked out in the first round.