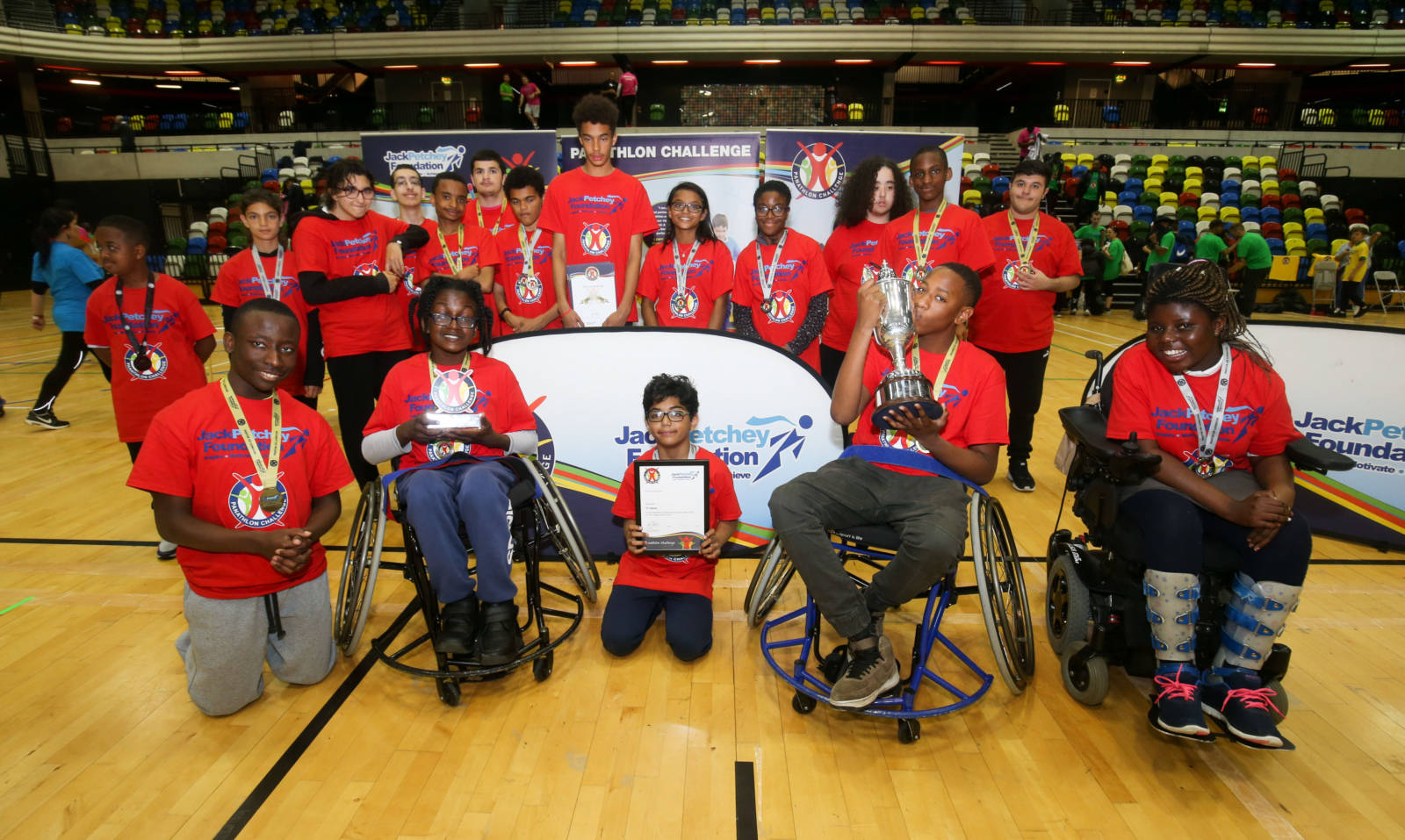 Barking and Dagenham were denied a record fourth successive win by Enfield in a thrilling finale to the Panathlon London Multisport Final at the Copper Box Arena.

In a contest which went right down to the wire in a rocking atmosphere at the London 2012 venue, it was Enfield – represented by pupils from Westlea and Waverley schools – who triumphed by the matter of a couple of metres in the concluding athletics races.

Going into the final round, Barking and Dagenham were ahead by two points and even a second-place result in the athletics races would have seen them win on count-back. However, they were edged into third by Croydon, meaning Enfield were crowned London champions for the first time by a margin of just two points. 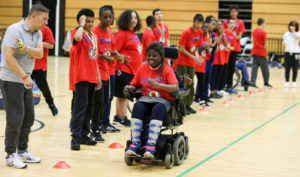 “I am the proudest teacher in the world today,” said a highly emotional Valerie Harnett, team manager and teacher at Westlea School. “I didn’t think I would ever see these guys win here and I am so, so pleased to see them do it. They have tried so, so hard and after seven years we’ve done it.

“I just love them to bits and I’m so pleased for them. Everybody is part of the team, the staff and parents included. I’m a bit teary and overwhelmed. If I never do a Panathlon as a manager again I will know I left today with a victory. It means so much.”

Marshall Agorhoulihan, 15, a Westlea School pupil, said: “It feels great, I’m so happy. We’ve worked so hard. I am just blown away. I never thought we would win but we took the victory and it feels amazing. I’m going to hang this medal on my wall at home and look at it all night.” 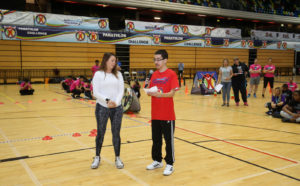 The day had started and finished with much for Enfield to be proud of. Their long-time team member and precision beanbag expert, Teyla Sadik, took to the microphone to make the traditional Panathlon Oath before the competition began.

The 17-year-old said: “I was a little bit nervous to start but I’ve been practising the speech at home which helped me a lot. I’ve never done anything like that before. I love coming to Panathlons and they really help my confidence.”

Enfield finished with 50 points thanks to victories in boccia and both athletics events, with Barking and Dagenham on 48, Croydon on 40 and Merton just off the podium on 30. Full results here. 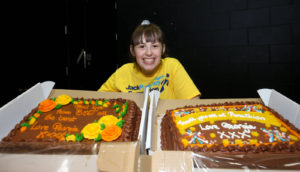 There were emotional scenes elsewhere in the arena where 18-year-old Georgina Hart competed in her last ever Panathlon event after a long association with us. Her mum Susan made three ‘thank you’ cakes to celebrate her daughter’s long time as a Panathlete, which has given her the confidence to achieve so much outside of the sporting arena.

Georgina (right) was featured on Sport Relief last year for starting her own anti-bullying campaigning. She also does public speaking, participates in the Paralympic sport of ‘club throwing’ and is on the Dagenham Youth Forum. She is a very active volunteer, including work on an autism project at her old school, Jo Richardson Community School and Castle Green in Dagenham, and working for the Progress Project, helping younger disabled people participate in sport. She is also on the committee for the International Day of Disabled People in Barking and Dagenham (IDDP),

Georgina said: “I’m really going to miss competing and I just wish our team well for the future. I feel sad that I can’t be part of it any more but my ambition now is to qualify as a Young Leader here next year.”

One of the most heart-warming sights of the day was seeing the gracious Barking and Dagenham competitors spontaneously shaking hands with the winning Enfield team members after the medal ceremony. That gesture was led by B&D’s 18-year-old Gnolly Oloko. 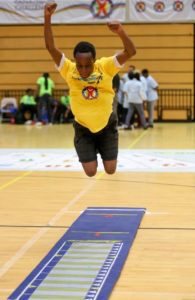 , mid-leap) appeared in a performance as Robin Hood in the opening ceremony for London 2012 and has revelled in being back at the Olympic Park as a competitor for the last few years.

He said: “I enjoy Panathlon so much because I enjoy long jumping and get to meet people from other schools. I get to cheer them on and shake their hands. I like to help my team do well.”

Sue Ferguson, Deputy Head of Sherwood Park School who form part of the fourth-placed Sutton team, said: “It has been so exciting since we’ve been involved in Panathlon for a number of years. It’s a brilliant organisation that gives the kids so many opportunities. We are so proud of our pupils’ achievements.

“Over time we have seen the self-confidence and skills of these pupils improve immensely. Our pupils have severe learning difficulties and they don’t understand just how good they are. This competition allows pupils of all abilities to participate.”

In the London Plate Final, taking place on the other side of the vast Copper Box Arena hall, it was Waltham Forest who took gold for the second year in a row. First-time finalists Lewisham came second just two points behind them, with Merton (40) taking bronze and final debutants Westminster on 30. Full results here. 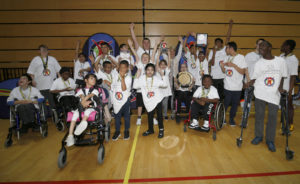 Teacher Nick Brittain explained: “We’ve been practising boccia, kurling and polybat at our Panathlon club. This event is what we work towards. We do sport in school, but this really enables them to come out and compete against other schools and take part in something big.

“They love being part of a team, cheering their team-mates on and seeing them get medals. They might not have much chance to do sport outside school but being here provides them with a chance to participate and excel.”

Waltham Forest team member Harrison Frost, 10, said: “I like the wheelchair slalom and have been practising really hard in PE and clubs twice a week. I am so happy to win a medal. I’m going to show my mum.”

For Conisborough College SENCO teacher Simon Fennell, it was a wonderful experience to be at his first Panathlon London final with the Lewisham team. He said: “It has been absolutely fantastic. They came into it not knowing about what was going on and they have really taken to it. It’s given the kids a lot of confidence and enjoyment.

“To be honest, our sport provision beforehand was limited, but Lewisham Council gave us encouragement to get out more so we have really run with it, coming to Panathlons, the London Youth Games, and South London special needs football. We’ve absolutely loved the experience.” 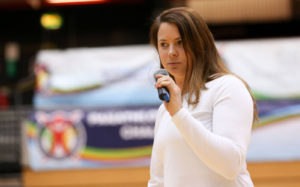 Panathlon Ambassador Liz Johnson was in attendance and said of the Young Leaders: “It’s great year on year to see the competitors come back better and stronger and honing their skills, but for me one of Panathlon’s most successful by-products is the Young Leaders. It requires a new intake every year and I’ve noticed in other areas of my life that one of the biggest things previous generations have missed out on is that level of integration that’s so authentic and natural.

“What Panathlon really provides is that exposure to difference – whether that’s age range, gender or disability. People who have and don’t have disability mix together on a completely normal level. Actually, there are no issues and people converse as we should, like human beings. There’s a level of mutual respect, admiration and trust. They are treated like peers.” 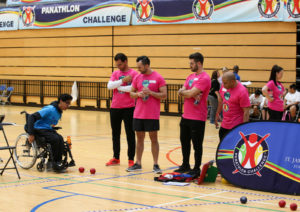 Additional officiating and helping out was done by a group of employees from our funders investigo.

Their Head of Marketing, Lisa Holberton, commented: “This has far exceeded expectations. We support Panathlon as our Charity of the Year. We choose a smaller charity intentionally to make a difference, and to see that difference being made to these children here today has been amazing.”

Further reaction from pupils, teachers, funders and leaders will follow in forthcoming days.