On Wednesday 19th November Panathlon delivered the Essex wide Lord Taverners Boccia U-19 competition at Columbus School, Chelmsford. With only two qualifying spots for the East of England Regional Final it was going to be a tough day of competition.
8 teams were split in to two pools. A big upset in the qualifying round with champions of the competition last year Stanway School missing out on the semi-finals due to a “countback” situation, as three teams finished on the same points. They subsequently finished 5th overall.Both semi-finals were closely contested but it was Beacon Hill and Southview who emerged victorious.

Two very strong teams fought to be named Essex Champions with the final going down to the wire. Beacon Hill secured the victory with their final ball to take 3 points and finish the final 5-1 overall. Davenant Foundation secured third place with a victory over Lancaster of Southend.A big congratulations to Beacon Hill and Southview, Witham who will represent Essex at the East Regional Boccia Final run by Panathlon at The College at Braintree on the 22nd January. 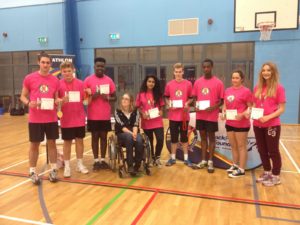 Mary Johnson from Boccia England said, “It was a great days Boccia, quality competition and a fantastic event all round”
Panathlon wish to thank Columbus College for the use of the facility, Paralympian Fran Williamson (pictured at the top) and also the leaders from Sir John Payne Catholic School who following training from Panathlon lasst week, did a great job in officiating the competition to a high standard.