On June 9th we held our Essex Final at Mark Hall Academy with the 4 qualifiers from the earlier semi-finals in April.

Sixty-nice competitors from 6 schools in Thurrock, Tendring, West Essex and Harlow participated and were officiated by 14 Young Leaders from Great Baddow High School.

Brandon Morris in the Thurrock team was competing in his last Panathlon as a Beacon Hill student after 5 years representing his school, and again had his sights set on breaking his national shot put and javelin records.

Brandon said, “I’m off to College in September so as a farewell gift to the school, I want it to have a record breaking day.”

He didn’t disappoint by improving his shot put record by 20cm to 16.20m and smashed his javelin record by 3m to 33m 60cm.

He said, “I’m thrilled to do it on the biggest stage at the Final, I hope to involved again next year through College but if I can’t I have had a day to remember.” 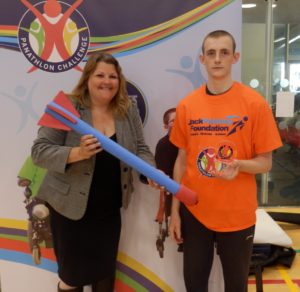 He is pictured here, being congratulated by Nicki Casey from the Jack Petchey Foundation.

His team Thurrock, made up of students from Beacon Hill, Treetops and Harris Academy, triumphed again for their 4th consecutive county win and the right to represent the Essex in next year’s East of England Regional Finals.

Thurrock dominated winning 5 out of the 6 disciplines to amass 58 points out of a possible 60. Second place was close affair with Harlow just edging West Essex‘s Oak View on countback, after both accumulated 40 points. Team Tendering were fourth with 30 points. Full results here.

Brandon Mullin lead of the Thurrock team said, “We learnt a lot from last year’s Divisional Finals and we have taken on board lessons learnt which has showed through today. We have had training sessions at lunchtimes and Treetops School have been involved and collectively we have raised our performance across the sports. It is great to win once more and earn the right to challenge ourselves again at a higher level.”

Danielle Tracey, lead Teacher from Treetops said, “We felt so nervous this morning, we knew we had prepared well but understood that Harlow had been very good in the semi-final, so we all of us needed to bring our ‘A’ game, which we did.” 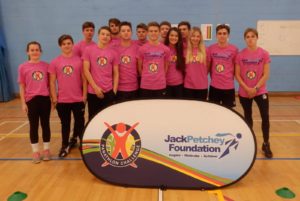 One of Panathlon’s leading Young Leadership schools in the country, Great Baddow School from Chelmsford, officiated the final and again did a great job of making the finals day run smoothly. (Pictured right)

Guests included Nicki Casey from Jack Petchey Foundation who have supported the Essex Panathlon in Essex since 2009. Nicki said,” It’s fantastic to be back at Panathlon and see such a competitive final. It’s great to hear the progression of the schools involved in all the various activities in Essex that Panathlon now deliver.”

Another Panathlon long term supporter are the Woodland Group based in Chelmsford. Group Director, John Stubbings said, “This is the second competition I’ve seen recently and It is always amazing to see the levels of enthusiasm and enjoyment from all the competitors. We’re really proud of supporting Panathlon’s growth throughout Essex and also now much further afield. Long may it continue!”

Toby Andrews of Active Essex attended on behalf of the County Sports Partnership and at the end of the day said “I heard all about Panathlon from other staff, it was great to see it live and it did not disappoint. The level of competition was impressive and so too was the interaction between competitors across the schools.”

For more photos please see the gallery of images here

Thanks again to our funders-