The line-up for the 2015 Essex Panathlon final is now complete after Harlow and Colchester qualified from the north Essex semi-final, held at The College at Braintree.

They overcame the challenge of Tendring and North West Essex to reach the final at Basildon Sporting Village on Friday 3rd July, where they will battle it out with Thurrock and West Essex to decide who will be crowned 2015 Panathlon Essex champions.

A busy few weeks of Panathlon action in Essex was rounded off by the county’s first Swim Panathlon, which saw 20 students from three Colchester schools compete (more details below).

But all eyes were on Braintree on 7th May, as 70 children from six North Essex schools battled it out for the two remaining spots in the Essex multi-sport final.

An extremely competitive day of sport took place, especially in the table cricket, where Tendring overcome Colchester in the final by the narrowest of margins. After the two teams tied on both runs scored and wickets taken, Tendring pinched the gold medal by virtue of having scored the most sixes in the game.

But, despite their best efforts in the remaining events, neither team could catch Colchester and overall winners Harlow, who put in a very strong performance to win four out of the day’s six sports: boccia, new age kurling, polybat and field athletics.

A full breakdown of scores is available on our results page and you can see the competitors in action in the gallery below.

Thank you to the leaders from the College at Braintree who did a fantastic job officiating the day and congratulations to Harlow on qualifying for their first final in a few years and to Colchester who will join them.

Rhys Crooks, a teacher at Lexden Springs School in Colchester, said “For a lot of our students it’s their first ever sporting competition and they have loved it.

“They have said it is nice to feel like a real athlete coming to a big venue to compete and winning something for their efforts.

“We don’t have great facilities at school, so can’t play things like boccia to scale, so it’s such a great experience to come to Braintree and compete at fantastic facilities.”

Waiting for the teams in the final will be the South Essex qualifiers from Thurrock – made up of students from Beacon Hill Academy and Ockendon Academy – and West Essex, represented by Oak View School.

A terrific three weeks of Panathlon action in Essex drew to a close with a fantastic Swim Panathlon on Tuesday 12th May – our first swimming competition in Essex.

It proved to be a fantastic day with everyone thoroughly enjoying themselves, so thank you to our competitors and to the six leaders from Great Baddow High School, who did an excellent job overseeing the day.

Linda Beard, Douchecroft School said: “The children have thoroughly enjoyed their day. They have had to learn how sit and wait their turn patiently and participating in events they have never done before.

“They have had to use a lot of teamwork today to  discuss who would be competing in which event and it has been a very educational day all around.” 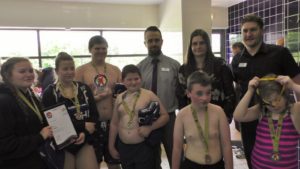 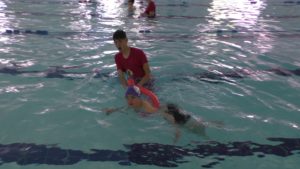 Finally, a big thank you to our funders in Essex: