The line-up for the 2015 Panathlon Football Cup has been decided after an action-packed set of qualifiers, with 16 teams from across London on their way to Wembley for our football finals.

339 disabled footballers from across 22 London boroughs have been in action over the last 10 days, as 48 teams battled it out in four regional finals for a place at November’s plate final and December’s cup final, both to be held at Powerleague Wembley.

With a finals place under the shadow of the Wembley’s famous arch up for grabs, the five-a-side competitions produced goals galore, with the net bulging a staggering 785 times in a total of 171 games played across north, east, south and west London.

Each regional final featured an under-13s and under-16s competition, with each borough fielding a team for both and the combined results across the two age groups dictating their overall position in the standings. 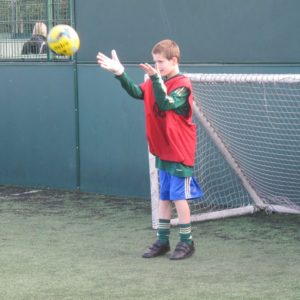 The action kicked off at Goals Eltham on 13th October, where Bromley won the south London final, before Waltham Forest were crowned East London champions at Powerleague Newham the following day.

Each of our regional winners are heading to Wembley for the December’s champions final, where they will be joined by the runners-up from their region for another round-robin tournament. Before then, the third- and fourth-placed teams will battle it out in next month’s plate final. A full finals line-up can be found below.

“It was another great event today. Our pupils loved it and had a great time again!” said Dan Cayford, teacher at Parayhouse School in Hammersmith & Fulham, who will have a chance to retain their London plate title, having finished third in the north London final.

“The kids had loads of fun today,” said James Cresser, teacher at Samuel Rhodes School in Islington, who finished third in the east London final. “They are all delighted with their medals and cannot wait for the finals. We will celebrate it in assembly. It’ll be nice for the school to see how well they did.”

Football was introduced to the London Panathlon programme in 2008, targeting players not involved in any competition elsewhere. We have since provided opportunities to Panathletes with severe learning difficulties, visual impairments and Powerchair users, involving over 500 disabled footballers each year. 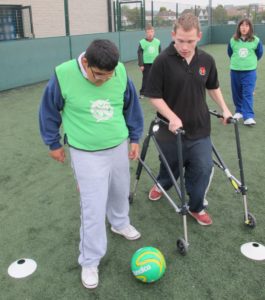 At the South London finals, we piloted a coaching session for emerging players not yet comfortable or confident enough to play in a competitive match.

The session, led by Panathlon’s school ambassador Thomas Clements (pictured left), gave those youngsters who are not regular football players a chance to enjoy being a part of a football competition.

It proved a big success, with many of the new players expressing an interest in joining their school’s football clubs as a result, so we hope to continue this new and exciting opportunity at the London finals.